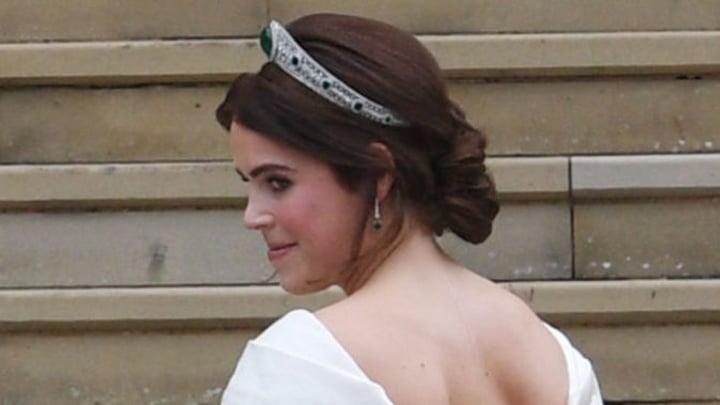 The couple tied the knot at St George's Chapel on Friday. Source: Getty.

With every royal wedding comes months of anticipation about the bride’s dress and Princess Eugenie certainly didn’t disappoint with her stunning choice of gown as she said her vows at Windsor Castle on Friday.

The 28-year-old looked sensational in an off-the-shoulder gown designed by British designers Peter Pilotto and Christopher De Vos, which featured a corset top and beautiful full skirt made from a blend of silk, cotton and viscose.

Eugenie, who is the youngest daughter of the Duke and Duchess of York, specifically requested that her wedding dress have a low back, so as to show off the scars from surgery she had at the age of 12 to correct scoliosis.

She teamed the stunning gown with one of her grandmother the Queen’s personal tiaras – the Greville Emerald Kokoshnik Tiara – which featured a striking emerald stone in the centre, and opted to go without a veil for her big day. Her bridal jewellery, a pair of diamond and emerald drop ear-rings, were a wedding gift from her husband-to-be.

Adding a personal touch to her gown, Eugenie worked with the designers to incorporate symbols of the Scottish thistle, as a nod to Balmoral, the Irish shamrock in reference to her mother’s side of the family, the York rose and ivy which represents the couple’s home, Ivy Cottage.

Eugenie arrived at St George’s Chapel with her father Prince Andrew, the Duke of York, in the same car that convened Carole Middleton to her daughter Catherine’s wedding to Prince William, at Westminster Abbey, in 2011.

Groom Jack, 32, arrived ahead of his bride and wore a traditional British morning suit in a dark shade of navy, with a vibrant waistcoat and pale blue tie which matched the wedding flowers. While his brother and best man Thomas Brooksbank wore a similar style, with a contrasting grey waistcoat beneath his jacket and a pink tie.

Ahead of her special day the Duke of York’s daughter appeared on UK breakfast TV show This Morning where she hinted that her gown would show off the scars on her back from childhood spinal surgery.

She said: “I think you can change the way beauty is, and you can show people your scars and I think it’s really special to stand up for that. The Royal National Orthopaedic Hospital, the RNOH, is a huge charity — I’m patron of their appeal and I had an operation when I was 12 on my back, and you’ll see.

The happy couple began dating in 2010 after meeting in the luxury Swiss ski resort of Verbier, and tequila ambassador Jack got down on one knee in Nicaragua in January.

Did you watch Princess Eugenie’s wedding? What do you think of her wedding gown and choice of tiara?