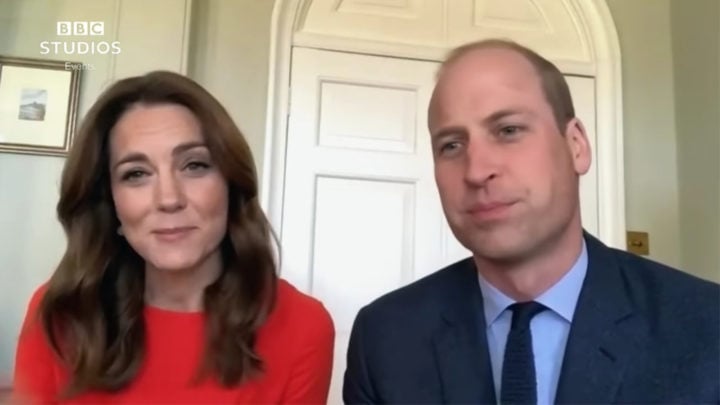 Catherine and Prince William enjoyed a chat with veterans at an aged care home on VE Day. Source: YouTube/ The Royal Family

Prince William and Catherine marked VE (Victory in Europe) Day with a special video chat to some of Britain’s veterans this week, learning about their stories at war and how they’re coping in self-isolation.

While they couldn’t be their physically to send their best wishes to the brave veterans on the anniversary of World War II in Europe, the royal couple were all ears as they used technology to connect with residents at Mais House, a Royal British Legion care home in the United Kingdom.

The Duke and Duchess of Cambridge were absolutely glowing as they listened to some of the oldest and youngest veterans at the care home reminisce on their times at war.

Catherine donned a lovely red blouse for the day and kept her brunette locks down and slightly waved for the special meeting. Meanwhile, her husband Prince William sported a navy suit and light blue shirt.

Although separated on the important day due to the outbreak of the coronavirus, William ensured residents at the care home that they were in everyone’s thoughts on VE Day, with residents across the UK marking the occasion with individual commemoration services.

“Because we can’t be together, everyone’s still thinking of you all today, and are very proud of everything you’ve all achieved,” he told the veterans.

Charles Ward, 101, was just one of the veterans to speak to the couple on May 8. The eldest resident at the care home was part of the Special Operations Executive team during the war, deciphering messages from British agents parachuted into France and Italy. Charles told told William and Kate it was his job to deliver rum to his fellow servicemen all those years ago when the war came to an end.

“Yes we were in Greece at the time and I had to go round early in the morning with rum for the men,” Charles told the couple. To which William added: “I bet you were the hero at the time.”

Meanwhile, resident James Pyett, 95, also chatted to the royals, with questions asked about his experiences of the Blitxz – the German bombing campaign against the UK during World War II.

The veteran told William and Kate his family were targeted on a number of occasions, as they moved from the East End of London to Bournemouth to seek shelter.

“I was blown up and put in hospital and my father said, ‘right, if we’re going to be bombed here, we’re going back to London’,” he said. “We moved in on a Saturday afternoon and we were bombed out on the same Saturday night.”

During the chats the duke and duchess spoke of how their children were marking VE Day, with Catherine explaining George and Charlotte had some special projects to help learn about the war and the brave veterans who risked their lives.

“The school has set all the children a challenge and they’re currently trying to learn all the lyrics to the song ‘We’ll Meet Again’,” Catherine told the veterans. “It’s been really lovely having that played everyday.”

Meanwhile, the mother-of-three also said George has been learning a lot about World War II and would love to speak to the veterans at the care home at some stage.

“George is just starting to learn about the second world war and things like that as well,” Catherine said. “He’s be really honoured to come and speak to you, so maybe another time George can have a quick chat to you.”

Did any of your loved one's serve in the war?