Just a fad, or worth the cash? 7 air fryer myths busted 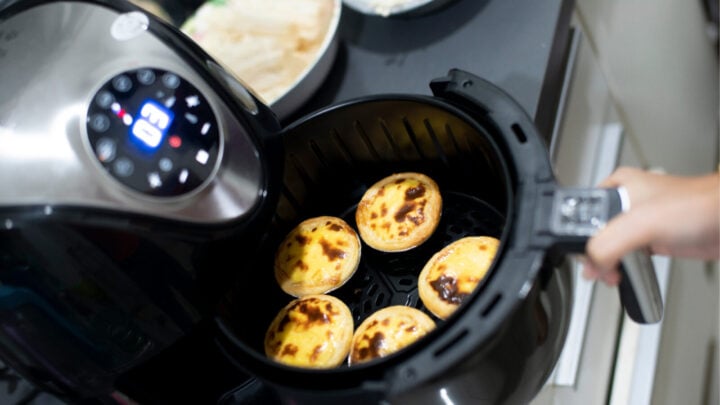 Unless you’ve been living under a rock, you’ll have no doubt seen or heard about this year’s must-have kitchen appliance, the air fryer. Whether it’s Kmart’s sell-out budget version, or Aldi’s recent offering, there’s barely a retail chain in the country that hasn’t jumped on the bandwagon.

And it’s no wonder why, as not only do air fryers cut down the amount of oil you use at meal times, they can also reduce cooking time and even slash the number of pots and pans you’re left with after enjoying dinner. What’s not to love?

Despite their popularity though, some people still aren’t convinced and reckon air fryers are just the latest “fad” to sweep the nation. So, consumer group Choice set out to bust some common myths about air fryers – and, if you don’t have one yet, their findings might just change your mind.

Myth one: It fries your food

While the name might suggest that your food will be fried, it’s actually not the case. Air fryers circulate air around the interior of the appliance, which bakes your food, rather than frying it – it essentially works just like a bench-top oven.

“The biggest misconception is that air fryers cook foods the same as deep frying,” Choice home economist Fiona Mair says. “They cook as an oven would, so foods are more oven baked than deep fried. “It’s just smart marketing to make people think they can get the same results as deep frying without all the oil used, but that’s not the case.

“You need oil to give the flavour and texture to the food to call it fried. Food cooked in an air fryer is the same as oven-baked food.”

They have enjoyed a huge boom in popularity recently, despite having actually been around for a number of years already. But Mair says air fryers are not just a “fad product” because they actually do have some benefits that home cooks can’t get enough of, particularly those with large families to feed.

“Air fryers are popular because of their convenience for families who cook a lot of frozen foods, eat at different times or don’t have a great oven,” she says. “They also don’t heat the kitchen up like ovens can and are fairly safe to use.”

When you think of fried food, your mind no doubt drifts to less-healthy options like crispy bacon, hot chips or delicious pub-style chicken parmys. But can you cook healthier foods in your air fryer? The answer is yes!

Mair says: “Air fryers can be used for cooking similar foods to what you cook in the oven, like roasting and grilling meats, vegetables, nuts and even reheating. The health benefits are the same as cooking in an oven – very little oil is needed.”

However Mair advises against cooking everything int he air fryer, as the fact that the appliance only has a top element and no bottom element can mean the food does not cook evenly.

When buying an air fryer, should you be looking for one that comes with an array of add-ons and accessories? No, says Mair, it’s more important to choose an appliance that performs well.

“A standard air fryer doesn’t have any accessories other than a pull-out drawer with a perforated basket or a grill rack that sits on the base,” she adds. “That said, a rotating basket is useful because you don’t have to remember to shake the food midway through cooking. But this accessory only comes with the benchtop-oven varieties.”

Sadly, this is not necessarily true. While air fryers do reduce the amount of oil you need whilst cooking, which is good for your health, it all comes down to the types of food you are choosing to cook. As hot chips done in the air fryer are still less healthy than a salad or boiled vegetables, of course.

“Avoid frozen prepackaged foods such as chips and chicken nuggets, as they’ve been pre-cooked in oil,” Mair suggests. “It’s just so easy to make homemade potato or vegetable chips. Roasted nuts are also simple to do in the air fryer – just toss two cups of natural nuts in a bowl with half a tablespoon of oil,  half a teaspoon each of cumin and paprika, and one teaspoon of salt. Mix, shake and enjoy!”

Myth six: The more you spend, the better

As with most things in life, it’s easy to think you’re getting a better product simply by spending more. But, as most people find out the hard way, that’s not always the case. In fact, Choice previously tested a range of air fryers and one of the recommended options was more than half the price of the most expensive version they tested.

Mair says many bench-top ovens also claim to air fry. “These tend to come with more functions such as a rotisserie and even a rotating basket, which eliminates the need to stop and shake the food during cooking,” explains Mair. “They have a large capacity and can accommodate a whole chicken, but are bulky and can take up a large area of your kitchen bench.”

Starts at 6o previously pulled together some of the best EOFY deals on air fryers. You can read more here.

Myth seven: They’re easy to use

Yes, they are easy to use, but can you simply set and leave like the trusty slow cooker? Unfortunately not, says Mair. “Supervision is important,” she adds. “No matter what air fryer you have, you will have to shake or turn the food at some stage – and more than once is my advice for better evenness of browning and cooking.”

Mair also points out that many – often cheaper – versions will not tell you when it’s time to shake or turn the food, so it may be worth looking for a product with this feature.

Do you own an air fryer?