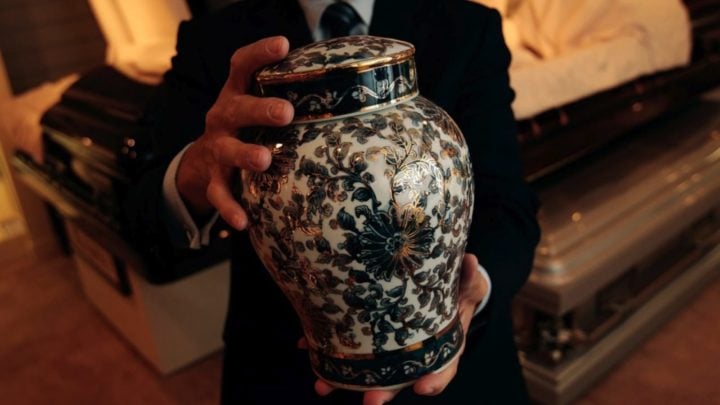 Many families end up feuding over what to do with a relative's ashes. Source: Getty.

While many people ensure that their family are aware of their wishes before they pass away, often choosing where they’d like their ashes scattered in advance, others avoid the topic and never set out a plan for their relatives – and it can result in ugly family feuds once they’re gone.

Now an Australian lawyer has recalled some of the most shocking and upsetting family rows that he’s encountered through the years, while offering advice to other Aussies to avoid the same trauma themselves.

From “mortified” kids discovering their mother’s new partner had scattered her ashes without telling them, to a son refusing to allow his father’s wife to access his remains, Andrew Meiliunas, senior associate at Maurice Blackburn Lawyers, has watched a number of families lock horns over what to do with a relative’s remains.

And while some cases can be settled privately, others have made it to Supreme Court level and cost families thousands upon thousands of dollars.

“Ashes are a source of contention in families. Everything from funerals, to burials versus cremations, to where ashes are scattered… Are they kept, are they split?” Meiliunas exclusively told Starts at 60.

He said one of the main sources of contention is blended families – with new partners and children often clashing.

“You’ve got the competing interests of the new spouse versus the children from the first marriage who sometimes have views about wanting to reunite Dad with his late first wife,” he added.

Other issues can arise when someone passes away in a different country to where their family live, or where they wish their ashes to be scattered, and getting them transported back can not only be difficult – but also costly.

Recalling some of the cases he has faced, Meiliunas revealed how one of his clients re-married a lady with two daughters from an earlier relationship. There ended up being a mediation, as he had been left out of his spouse’s will, which his late wife’s daughters were also invited to.

“At the mediation, the daughters asked, ‘Where are mum’s ashes?’ He replied that he’d already scattered them. Suffice it to say, lots of yelling ensued,” Meiliunas recalled.

“I’ll never forget what the kids said. They said, ‘Mum wasn’t fish food’. They were furious. They were just mortified,” he added. “People can use it as a tool to provoke family members.”

Indeed, Meiliunas claimed many clashes are down to one family member trying to gain complete control.

“It’s a real phenomenon, people have an emotional attachment to ashes and they are used as a control mechanism and a way to exert dominance over others,” he said.

In another case, one of Meiliunas’ clients – who was also in a second relationship – had just lost her partner to terminal cancer. Before he died, they had bought a joint plot with the intention of both being interred together.

However, when it came time to make the arrangements following his death, the man’s son – who was the executor of his will – refused to allow her access to his father’s ashes.

She eventually fought the son and while she wasn’t allowed access to the ashes, she was awarded hundreds of thousands of dollars.

“The son – the executor – just said, ‘No, bad luck’. It’s a control thing,” Meiliunas claimed. “If those boys had of just given her [the ashes] she never would have gone looking for more. All she ever wanted were the ashes.

“But because they poked the sleeping bear, she came to us and we said, ‘Although we can’t guarantee that you will get the ashes, you might be able to make a family provision claim against the estate’, and we got a settlement worth several hundred thousand dollars. If they had of just given her the ashes they would have saved themselves a lot of money.”

Meiliunas admitted it’s extremely rare for a dispute over ashes to go to court, but it can happen now and again – and cost huge amounts of money.

Offering advice to other families to try and avoid feuds themselves, Meiliunas explained that the “buck stops with the executor of the will” every time – so it’s important that they’re fully aware of their loved one’s wishes.

However, he admitted when it comes to a will it can become extremely complex too because simply writing down what you want can only ever be a ‘wish’ – and therefore can be contested in court or by the executor later.

“It gets into this murky area of the law, a body or ashes are not property and therefore strictly don’t form part of your estate. It’s only ever a wish,” he explained. “At the end of the day the court could intervene. There have been cases where the court has ordered that ashes be divided.”

Many over-60s shared their own thoughts with Starts at 60, with most insisting their loved ones had conveyed their wishes to their loved ones before they passed away, ensuring no issues could arise.

“Brother, sister and I all knew where Mum and Dad wanted their ashes scattered… on a large hill overlooking the city they loved… must write a will,” one reader revealed, while another added: “It was made clear to us before their death what they wanted. My mother wanted her ashes placed in a family plot and my father wanted his scattered beneath a fig tree planted by an ancestor. I’ve mentioned to my family what I want but it’s up to them in the end.”

Meanwhile others insisted they don’t mind where their own ashes are scattered. One reader said: “Cremation is my choice (I don’t like the idea of worms feeding on my bones). Apart from which, being buried is such a waste of prime real estate. So, I’ve told the boys, scatter me wherever you like – across the ocean, in a forest, or plant a rose bush on top of my ashes. I don’t give a s**t!”

Another added: “We buried My Mum and Dad in a double grave in their home town where they were born and spent all of their lives. I can’t ever recall discussing cremation or burial with either of them. All the family just assumed they wanted a traditional burial. As for me; well I am of the opinion that what will be will be so I haven’t decided yet. Hopefully I have plenty of time left.”

Have you spoken to your family about your own wishes? Has your family suffered a feud following a loved one’s death? Did you disagree over where or how to scatter ashes?