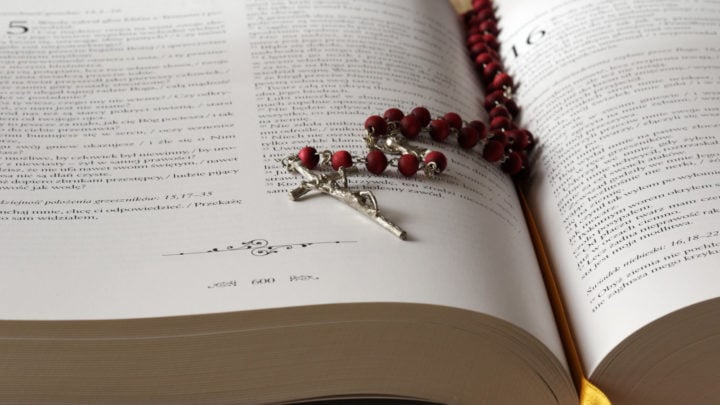 He was only in Genesis when something fell out of the bible. Source: Pexels.

Little Johnny opened the large old family bible and looked at the ancient pages with fascination as he turned them one by one.

He was still in Genesis when something fell out of the bible. He picked it up and looked at it closely. It was a very large old tree leaf that had been pressed between the pages of the bible long ago.

“Mum, look what I found!” Little Johnny called out.

“What do you have there?” his mother asked.

With astonishment in his voice, the young boy answered: “I think it’s Adam’s underwear!”

Daily Joke: A wife found her husband in bed with another woman

One night, an 87-year-old woman came home from bingo to find her 92-year-old husband in bed with another woman. In a fit of rage, she ended up pushing him off the balcony. The man survived but immediately took her to court.

Brought before the court, she was asked by the judge if she had anything to say in defence of herself.

A man came home from work one day to find his wife sitting on the front porch with her bags packed. He asked her where she was going and she replied: “I’m going to Las Vegas.”

He questioned her and she told him: “I just found out that I can make $400 a night doing what I give you for free”.

He pondered that then went into the house and packed his bags and returned to the porch and with his wife. She said: “And just where do you think you’re going?”