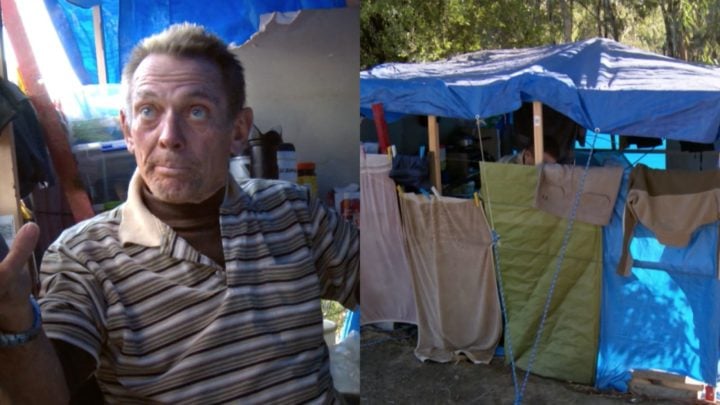 An Aussie man who abandoned society to become a permanent nomad has hit out at people calling him a bludger for relying on the Age Pension to survive – insisting he’s paid tax all his life and has earned the right to the support in later life.

Bob, 72, has spent the last 41 years cycling round Australia and taking up seasonal jobs in towns right across the country. It’s meant he’s learned to live solely from a tent and a makeshift lean-to, washing, cooking and sleeping in the tiny space.

Appearing on SBS’ Struggle Street, set to air on Wednesday night, Bob claimed he was abandoned as a seven-year-old child after his mum took him to a boys home, before knocking on the door and saying: “I don’t want him anymore, you can have him.”

After being raised by the Salvation Army, Bob left at 18 and was conscripted to fight in Vietnam. Luckily the war ended before he saw any action and it was when he returned that he developed his love for cycling – beginning his four decades of travelling from there.

“I did a lot of seasonal work to keep me going. I started in New South Wales and went to Queensland and Perth. I did all the seasonal work you can think of – garlic, onions, apples, oranges, pears, chipping and cotton,” he said on the show, while speaking from his makeshift home. “I’ve been on the road for 41 years camping in tents every day and I’ve never had a proper roof over my head with four walls with hot and cold running water, electricity and gas.”

'Struggle Street' season 3 premiers Wednesday 9 October, at 8.30pm on SBS.
Over 3 million Australians live below the poverty line. Landmark series 'Struggle Street' returns to SBS this October to share stories of adversity and resilience in rural and regional Australia. pic.twitter.com/PJYqRG0V9S

However, he was recently forced to abandon his travel dreams and stay put in North Wagga, NSW, to save every dollar he could for a pricey operation to remove a cataract. He admitted he’s now facing the prospect of having to re-enter society.

“I’ve got to have an operation and that’s going to cost over six grand. So, I’m camping out here so I can save the money up to pay for that,” he explained. “It’s not easy, but I think a lot of people make living on the pension harder for themselves because of smoking, drinking and gambling.

“They are the three that take your money. I don’t smoke, I don’t drink, and I don’t gamble. The only person I can blame for living like this is myself. I can’t blame the government I can’t blame that person. I can’t blame the council. Because years ago, I should have saved my money. And then I wouldn’t be in this situation now.”

He insisted he gets angry when he hears people like himself labelled bludgers, as he’s worked hard himself throughout his life and paid hundreds of thousands in taxes to earn the right to have the financial support.

“People turn around and look upon you and say, ‘He’s a bludger, he’s bludging off the government’. No! No! I get my pension but you know how much tax I’ve paid over the years? Couple of hundred grand, don’t you think I’ve earned the right to have the pension?”

It’s also meant however that he’s had difficulty with Centrelink, as with no fixed address, it can cause problems logistically when he crosses into a new state. “When you go from one state to another, when you cross that border, it doesn’t necessarily mean your ID will be recognised. Every state has their own way and their own rules to do things,” he said.

He’s managed to get by and feed himself all the same, learning quickly how to ensure he gets the nutrients he needs to survive and remain healthy. Asked about his diet, he explained: “You have to live on artificial supplements like vitamin tablets, tinned food, biscuits. You’re limited to how much you can carry. Water is the main problem.”

Bob eventually managed to save enough to have the operation. Eventually, under threat of being forcibly removed from the free camp ground he was living on, he moved over the fence and onto separately-owned land to remain in one spot until he could plan for his future.

Would you ever consider living a life on the road like this? Do you think people in this situation deserve more support?