Seniors who snore suffer a ‘reduced quality of life’ 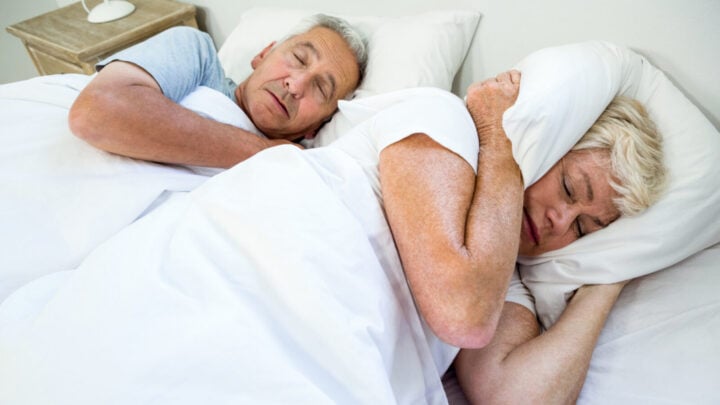 We may all be guilty of occasionally snoring, but did you know that such a simple thing we would write off as an annoyance can have major effects on the body? Australian researchers have released data from a sleep study that links snoring and sleep apnea to poor quality of life and lower cognitive ability.

The analysis Sleep-disordered breathing was associated with lower health-related quality of life and cognitive function in a cross-sectional study of older adults published in Respirology, carried out a sleep study involving 1,400 seniors over 70.

Sleep‐disordered breathing was associated with lower health‐related quality of life and cognitive function in a cross‐sectional study of older adults https://t.co/DRMymRAhAH

The study found that over 80 per cent of participants suffered from sleep-disordered breathing issues such as sleep apnea and snoring. The pauses in breathing and temporary decrease in oxygen levels lead to low physical health-related quality of life, and poorer thinking abilities.

Researchers are looking into whether sleep-disordered breathing (SDB) issues and obstructive sleep apnea create a greater risk for dementia.

“Several studies have now linked SDB to dementia risk,” the research read. “This association, however, is not conclusive.”

Data published in Alzheimer’s & Dementia: The Journal of the Alzheimer’s Association linked “longer and more frequent daytime naps” to dementia.

The study showed that whilst excessive napping could cause dementia, contrariwise, deteriorating cognition could cause more frequent napping.

Reported by The Harvard Gazette, researcher Peng Li said: “Daytime sleep behaviours of older adults are oftentimes ignored, and a consensus for daytime napping in clinical practice and health care is still lacking.”

“Our results not only suggest that excessive daytime napping may signal an elevated risk of Alzheimer’s dementia, but they also show that faster yearly increase in daytime napping may be a sign of deteriorating or unfavored clinical progression of the disease,” Li said.

The 2022 Annual Global Sleep and Snoring supports the recent findings of reduced quality of life, assessing the physical and mental impacts of snoring.

The report found that of the 2000 Australians surveyed, 49 per cent admitted to snoring while 51 per cent accused their partner of snoring, unveiling that those surveyed lost 2.9 nights of sleep to snoring per week.

Sleep Expert Olivia Arezzolo told Mute Snoring, who commissioned the study, that “the stress hormone cortisol can increase by 37% after just one night of insufficient sleep, leaving you feeling anxious, wired and unable to switch off”.

“In addition, beta-amyloid, a neurotoxin that contributes to brain fog, memory loss and even Alzheimer’s disease, increases by 5% after 2 nights of inadequate sleep. And, of course, fatigue – which single-handedly contributes to 20% of motor vehicle accidents,” she added.

Medical expert Dr Vivek Eranki said that snoring can have a flow-on effect, saying “sometimes people wake up with headaches and chest pains”. However, the study shows that snoring and sleep issues can affect more than just health, with the survey also revealing that 22 per cent of Australians argued about snoring on three or more occasions each month.

Interestingly, the Respirology study stated that snoring and sleep apnea were not related to depression or daytime drowsiness.

The pauses in breathing and temporary decrease in oxygen levels lead to low physical health-related quality of life, and poorer thinking abilities.