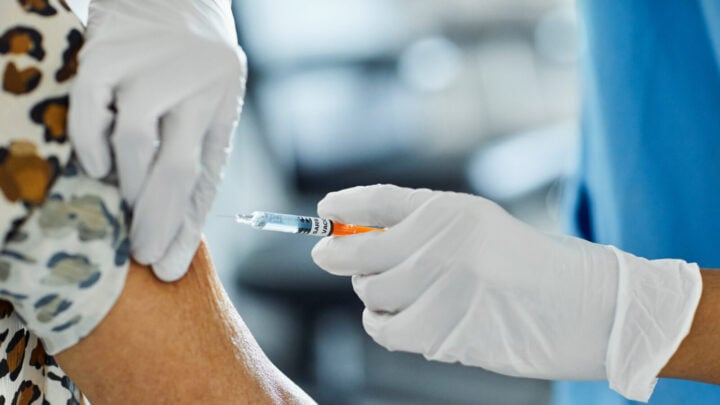 Aussies under 50 have been advised not to be given the AstraZeneca vaccine over blood clot fears. Source: Getty.

The major medical news story over the past few weeks has been the potential risk of clotting associated with the AstraZeneca vaccine for Covid-19.

To date, around 25 million people around the world have been vaccinated with the AstraZeneca vaccine. At the time of writing, the total number of vaccines administered globally sits at around 734 million, with 159 million people fully vaccinated. The majority of these people are in the United States, and had either the Pfizer or Moderna vaccines.

Over the past couple of months there have been a number of reports of blood clotting events within two weeks of vaccination with the AstraZeneca vaccine. These very unfortunate cases still need to be put into perspective.

It appears that the clotting risk from the AstraZeneca vaccine is one in 200,000, and the risk of death is one in 800,000. Every year, in Australia alone, 30,000 people develop blood clots unrelated to any form of vaccination. Of these, around 6 per cent will die, especially if not detected early.

If a person sits on a plane from Sydney to Heathrow and develops the economy syndrome, also known as deep venous thrombosis (DVT), they want to sue Qantas, but in fact they should be suing their relatives for giving them the clotting abnormality that predisposed them to this event.

A 44-year-old man in Melbourne developed probable vaccine induced thrombocytopenia recently about a week after receiving the vaccine. He’s being treated in a Melbourne hospital. Thrombocytopenia is a condition that involves the platelets, which are these sticky cells in the bloodstream that combine with clotting factors to form clots. If you cut yourself and start bleeding, it’s necessary to form a clot to stop the bleeding. This is where the clotting factors and platelets perform their duties appropriately.

In potential vaccine induced thrombocytopenia, the platelet levels markedly drop below normal, which is where you would expect bleeding not clotting, but the platelets become incredibly sticky and inappropriately form clots that may then lead to clotting in different sites throughout the body and a severe syndrome which in a proportion of cases may even lead to death if not detected and treated early.

In cerebral venous sinus thrombosis, these form abnormal clots occurring in the veins that drain blood from the brain and are more common in pregnant women or those on the oral contraceptive pill; still an extremely rare condition.

The general risk of DVT in pregnant women is 10 times normal and in those taking the oral contraceptive pill is three times normal. I would suggest, however, that women who develop these conditions in pregnancy or associated with the oral contraceptive pill have one of the more common clotting disorders such as Factor V Leiden, anti-cardiolipin antibodies or some other very uncommon disorder that makes your blood stickier than a person without these abnormalities. There’s no relation to increasing clotting risk in these more common conditions and being vaccinated.

There are three vitally important points to make here:

Therefore, looking at the numbers, there’s much less clotting risk in vaccinated people compared with those in the general public. It’s my opinion that the government is being very cautious in suggesting that people under the age of 50 shouldn’t be vaccinated with the AstraZeneca vaccine but rather have the Pfizer vaccine. These rare blood clotting disorders associated with vaccination appear to be more common in people below the age of 50.

The bottom line is that whether it’s the Pfizer vaccine or the AstraZeneca vaccine, these vaccines are incredibly safe and no one around the world who has been vaccinated with any vaccine that has been approved for use has developed severe Covid or died from Covid infection.

The strong message here is that we all need to be vaccinated as soon as possible when we qualify. The frustration in this country is the slow rollout but the good news is that there are almost no cases of Covid-19 in our country so we can afford to wait. I’ll certainly be having my vaccination (almost certainly with the AstraZeneca vaccine) as soon as it’s available. I would suggest you do the same.

What are your thoughts on this? Are you planning to get vaccinated against Covid-19?