Grant for Granny: Mums push for grandparents to be paid for childcare 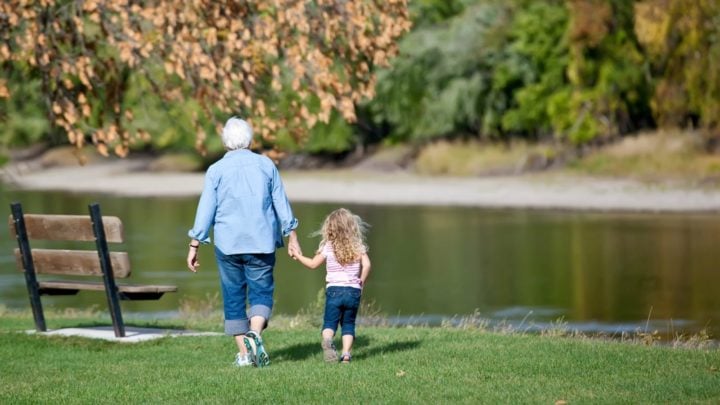 Two-thirds of working mothers would rather have their kids babysat by grandparents for payment. Source: Getty

A significant number of mothers using formal childcare want government subsidies to be extended to informal caregivers, such as grandparents. A new report from the Centre for Independent Studies (CIS) shows two-thirds of working mothers would rather have their kids babysat by grandparents for payment – even if that meant the subsidy was less.

Under the government’s $8 billion childcare subsidy package, parents can claim up to $10,000 a year per child for formal childcare costs, depending on their income. Grandparents who have full custody of a grandchild, or look after the child for at least 65 per cent of the time, are also eligible for a subsidy. However, working mothers now want it extended to all grandparents who help them out.

According to the survey of 521 working mothers, 66 per cent would be okay with less subsidy if they could spend it on more informal care. Fiona Mueller, co-author of the What Do Parents Want? report, said majority of parents thought formal care was too expensive and inflexible.

“50 per cent of the 521 working mothers surveyed nominated a first preference other than formal childcare, and instead would prefer informal arrangements such as grandparents, friends and family daycare,” Mueller said.

“Only 26 per cent of mothers disagreed with the idea of government subsidies being available for informal care, while 66 per cent would prefer this flexibility even if it meant receiving a lower subsidy overall.”

And when it came to their top three priorities in childcare, 60 per cent of mothers prioritised “warmth” of the childcare above all other factors, followed by location (56 per cent) and cost (48 per cent).

“You’ve already got a situation where people are being paid to care in their home,” he said. “That’s the sort of thing this group is looking at. What this possibly is pointing to, is that there is a lot of pension poverty out there and there are also a lot of older Australians now who are out of work.”

However, he also said not every grandparents would be in favour of the proposal, adding: “It’s a tough one. We hear a lot of our members say that sometimes they love looking after the kids, and, other times they feel as if their grandkids are being put on them and they can’t say no. But, there may well be people who want this choice.”

Meanwhile, it comes after a survey by finder.com.au showed that grandparents were collectively saving working families very close to $2.3 billion a year in childcare fees. Finder’s analysis of Australian Bureau of Statistics (ABS) data also found that 900,000 Aussie children (aged 0-12) are cared for by their grandparents instead of attending formal daycare.

If you’re one of the many grandparents who are full-time or substantial carers for their grandkids, here’s how the new Child Care Subsidy could affect you:

For a grandparent to be eligible for the Child Care Subsidy payment, they must currently look after the child for at least 65 per cent of the time. They must also have “substantial autonomy” over the day-to-day decisions about that child’s care, welfare and development. Essentially, this means grandparents who care for the kids part-time after school are unlikely to be eligible.

For grandparents that are eligible, the amount they’re entitled to can vary greatly depending on their individual situation. Those who are on an income support payment (for example, the Age Pension, Disability Support Pension or even Newstart) will have access to a considerable amount of subsidised child care through the Additional Child Care Subsidy.

They’ll be entitled to 100 hours of subsidised child care per child per fortnight, for which the amount of subsidy they receive will be “equal to the actual fee charged by the child care service, up to 120 per cent of the Child Care Subsidy hourly rate cap, whichever is lower”. The rate cap will vary depending on whether families use centre-based day care, family day care or outside school hours care.

Grandparents who are not on an income support payment but are still the primary carer will also have access to 100 hours of subsidised care per child per fortnight. But the percentage of cost that will be subsidised will be determined by their family’s annual income. For example, if they’re relying solely on an income from their superannuation fund, it will depend how much income is being drawn down.

What are your thoughts on this story? Are you a grandparent? Do you currently receive any government assistance for helping care for a grandchild?