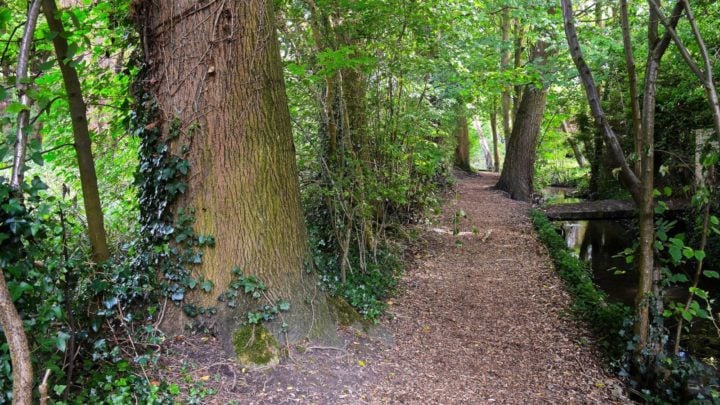 Ian enjoyed a long walk through the countryside of South Cambridgeshire in the UK. Source: Ian Smith

I was lost; no, sorry, I’ve only been lost once and that was scary. I was misplaced, yet again, and I decided to stay misplaced.

I’d gone out for an afternoon run with my camera, okay, so it was only a walk. So far I’d jumped a fence, quickly walked up a hill on private farm land and shot two huge haystacks and a rustic farm building. I heard a drone while I was there and turned to see the unmistakeable shape of a Lancaster bomber, soon followed by a Spitfire out of the United Kingdom’s Farnborough Airfield. I must be in England, I thought.

I’d then moved on to Royston, as per plan, to record the church and other significant buildings, preferably aged. The church had removed many of its tombstones and placed them side-by-side along an old vine encrusted brick fence. I started off towards where I thought the golf course next to a forest I sought was, before turning down a soon-to-be-apparent wrong road. I pulled up, hit the satellite navigation and typed ‘golf course’, confident there’d only be one. There were five.

I entered the first one and took off. Definitely wrong I surmised quickly; I hit another option and moved away again. It indicated I should turn right soon after so I did, knowing it wasn’t the direction I wanted but the map had indicated forests either side and any forest would do I surmised.

Continuing on I came to a building I fancied and pulled up. Its name was Sheene Mill and I had no idea what it was but, just as I was about to hit the shutter, a bride in an expensive gown filled the doorway. Some days you just get lucky.

I drove further down the side road that led to the course. First thing I noticed was a thatched cottage but, it was remarkable in that it was painted, wait for it, in pink! I later learned that it’s called Suffolk Pink. Then there were, about every sixth house, more thatched and Tudor style houses. My first opportunity to park came down the road aways, opposite a church with ringing bells. Perhaps they’d heard I was coming? Best to go and say hello, I thought as I moved past the usual lichen-coloured slabs of the deceased and chanced my arm on the door and there they were, off to the left, bellringers, all eight of them, faces strained with the effort of pulling the long ropes.

They didn’t seem overly pleased that I took a couple of snaps so I moved outside once more where the uplifting tones of their labours shrilled through the twilight air as I drifted towards the sign adjacent to my car. It said, ‘Melbourn 1’ and was adorned with a figure in walking mode. I assumed it would take me through the woods and I could return on the road with the special houses, so I set out, past the London Plane trees down a leafy path not three people wide.

It was a form of bliss, brushing past the new summer foliage, across a small bridge which lay just downstream from an old mill race that rushed beneath a house. Then I reached a gate with a sign that said, ‘Beware of Angry Bulls’. Strolling past I entered a field surrounded by trees and, yes, there were cattle present. As I passed them I noted that a white one appeared less than enamoured of my presence but I continued in a non-confrontational mode and came upon a couple who’d just entered the paddock.

The older man, of somewhat mousy appearance and seemingly shy of bovine experience, stopped me and enquired, “Excuse me sir, could you tell me if the cows are dangerous?”

“Oh, thank you” he said, somewhat bemused, and moved off.

Through the gate at the end and back beside the rushing stream I strode, with vestiges of habitation beyond the leafy trees and with notices that local groups had cleared the path on which I moved. I passed a man walking his dog and then came to a somewhat disconcerting billboard. It stated, ‘Permissive Path — The use of this path is for patrons of the Queen only. The land owner does not intend for this path to become a public right of way’. There was also an illustration of a crown. It was all so upper class England it made me sad to think of the divide that still firmly exists. Thank goodness it was on a path that ran off the one I was on.

Then, as I’d hoped, a right side exit appeared and I took a short close to the main road, past a man who bailed me up, apologised for having had a stroke, and wanted to know if I was a birder. I felt apologetic as I explained that I was a photographer with an interest in nature rather than a hard core twitcher but he described the bird to me anyway. I told him in Australia I would suggest it was a dollar bird but that I had no idea what his sighting might be because they don’t exist here.

Then I was in the street, intoxicated yet again by thatched cottages which made light of the 1.5 kilometres back. It had been a special afternoon, impromptu by design but delightful in execution.