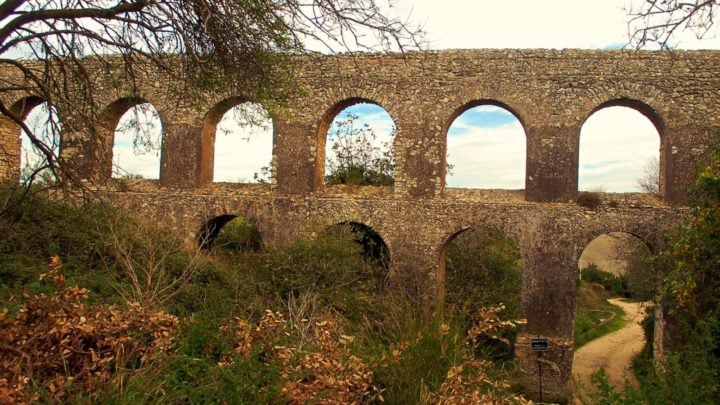 Tarquinia is siuated a little way inland from the Mediterranean coast, north-west of Rome in the Lazio region. Source: Ian Smith

“At least we’ve got a cabin.” How many times had we said that as the almost inaudible throb of the engines drove us across a choppy Ligurean Sea between Sardinia and the mainland. The nightmare of not having one en route to Tasmania or on the inner passage in Canada was behind us and we had learned.

Sleep came easily before we quickly disembarked and were on our way, only momentarily choosing the wrong route before reaching Tarquinia in the dawn’s early light, yet another walled Italian city reeking of history, its time-worn bastions overlooking the nearby sea.

The effects of taking two sleeping tablets still affected Rosemarie so the reclining car seat comforted her while I made off to wander the narrow cobbled vias where a hundred generations had trod before.

The washing still hung precariously beneath the windows; a stray cat dashing down an alleyway; the three-wheeled truck’s two-stroke motor putting along with its first delivery; short men with caps gathering at the cafe bar with arms waving; pigeons fluttering to gain a precipitous toehold on a bell tower; the sound of rubber tyres thumping on the cobbles echoing against the travertine walls; window shutters drooping in disrepair; the medieval towers gathering the first of the rays of light to creep over the hill; a lone photographer with tripod in hand; these are the sights of the early morn.

I reconnoitred and located a suitable cafe where I returned with she of the sleepy eyes and we savoured a repast, having two cups of warm brew and the same number of croissants at a price less than one cup of caffe latte at Positano or Capri.

Thus sated we drove further up the hill behind the town to the Etruscan Tombe where pre-Roman frescoes were to be viewed in all their funerary splendour, still in situ beneath the earth and accessed by narrow stairwells. Many were only unearthed in the late-1950s and ’60s and their state of preservation is remarkable, depicting all manner of scenes from hunting to banquets (where naked servants were in attendance), all in vivid colour.

With a coffee to help us on our way, the eastern horizon beckoned and I promised Rosemarie a treat in the little town of Bagnaia, not far from Viterbo. It had recently been on television, part of a series on great gardens but when the crew had arrived it was obvious the fountains had been in a better state of repair than when I visited five years earlier.

Villa Lante is set on a hill behind the village whose piazza has a tower with a memorial to a leader who shot an arrow from it to kill an opposing leader and thus save the town, sometime in the 1300s. The square was absolutely bustling when we arrived, something to do with a combination of Sunday and church I suspect.

What a treat the garden was; the patterned hedgerows had recently been trimmed, by far the majority of the water features were exuding moisture, the slightly faded frescoes still told their tale in the two garden houses and the classic statuary evoked wondrous images of a glamorous past; a massive reclining Neptune foremost among them.

Again it was time to move on and we put 100 kilometres quickly behind us before we started into the mountains. Mildly lost, I stopped by a lake to take a photograph. It was the first such body of water we’d encountered and there, only a kilometre away, was a picture-postcard village whose image was reflected in the surface.

Framed by the autumnal tones of mature trees, this almost hidden treasure became our somewhat delayed lunch stop as we located a popular trattoria and toasted our good fortune at finding such a gem; also checking out the local church with its ancient frescoes afterwards.

Piediluco, pencil it in for your next Italian holiday.

The perfect weather continued as we ascended and, as we did, a beacon of light-coloured stone shone from a hilltop, many kilometres away as the crow flies, many more on the winding mountain ways we had to approach on. Occasionally it would suddenly appear as we rounded a corner, enticing us onward with its beauty until we passed by Labro, perhaps a place where they make doors and breed dogs, perhaps not.

We continued through the mountains swathed in colour; vibrant yellows vying with brilliant reds and stunning oranges for prominence, none succeeding for long as they were surpassed as yet another bend unfolded yet another magnificent panorama.

Onward through Cascia and Aquasanta Terme we drove, though both towns slowed us considerably due to festivals taking place and buses disgorging their masses as we tried to find a way through. It all ended at Salvatore’s in Ascoli Piceno, an amazing end to a wonderful day.

Do you embrace the cultural history of a destination when you travel? Would a visit to Tarquinia, Italy make your bucket list?