‘Face-to-face with the feeling of drought in Uralla, New South Wales’ 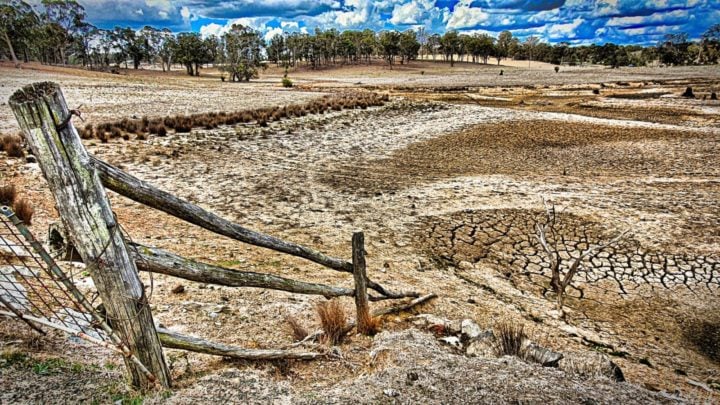 There was a deliberate intention to my route. I wanted to get off the highway, go see what the Big Dry was all about, get a feel for it, and experience the barrenness for myself. The brittle stalks of grasses, the fallen branches, the dried up dams, the suffering livestock.

I turned off on the somewhat optimistically named Barleyfields Road, past the old railway crossing house that’s a historical piece, miraculously surviving vandalism and still photogenic in its own right. Naturally I had to pull up for a shot.

It was only something short of kilometre further when I came upon what I was after. A few roadside trees were in a sorry state, there was no shortage of firewood here, and beyond, a sizeable dam whose cracked and mottled banks meant it was not worthy of the title at this time. Miraculously there was a miniscule remnant of deep brown water at one end.

A lone bird plunged optimistically now and then seeking anything to help keep it alive. To access the area I had to climb over a gate, one that had remained closed for some considerable time judging by the cluster of blown sticks gathered around the base and the rusty state of the four pieces of wire that held it shut.

Beyond was desolation. Plants that hadn’t dropped seed because there was no prospect of growth, low branches totally bare of any sign of life. If that wasn’t bad enough, half a dozen rabbits scattered before my presence, scurrying to their burrows in the dam wall, leaving only puffs of dust.

Birds squawked, their feathers ruffling, high on dead branches that barely flexed in the stiff breeze that cruelly eked any last moisture from the parched soil. A twig snapped beneath my feet, another of the sounds of drought. In the background, green willows seem to mock the current harsh times, but they’re sucking the dregs of the dam water.

When I drove away, it was to a place I’ve held dear over the years. It’s called Dangars Lagoon. It’s a wildlife refuge, mainly for waterbirds, because this pondage supports a significant population of such animals. Now it’s just a dried up wasteland, scavenged only by magpies and a few wrens.

As if to make it seem worse there’s been a fire through here that has all the hallmarks of being man made. It contrasts markedly with some green vegetation out in the middle that ekes an existence out of the subterranean moisture while it can. The hills in background are coloured only by the dark green eucalypt leaves and the sorry brown earth they rest upon.

I hope next time I come through there will be more shades of green, animals in pasture and a wildlife recuperating. Until then, it’s hard to get joyous about what confronts us.

Have you visited a drought-affected location on your travels?