All in a day: The best bits of the historic gold-mining town of Walhalla 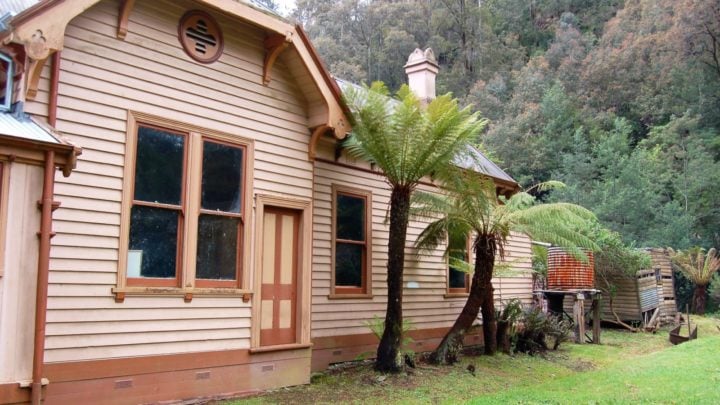 Walhalla was once a busy gold mining centre and one of the richest towns in Australia, today it's a historic township in Gippsland's alpine wilderness. Source: Ian Smith

Our story begins in Regensburg or, more specifically, 10 kilometres east of Regensburg. Here, perched overseeing the historic and famed Danube River in south-east Germany, is a temple of Greek proportions, very reminiscent of the Parthenon, inside which are commemorated great figures and events of German history; not only those associated with military conquest but also scientists, writers, clerics and those of the female gender.

Crown Prince Ludwig I of Bavaria, whose lands were occupied by Napoleon at the time of his idea, could little know or probably even care that this splendid edifice would be recalled in a Victorian town so far removed from the temple and all the ideas it embodies. Scientists would certainly be thin on the ground, as would clerics. Writers would come in the form of famed novelist Anthony Trollope and it’s unlikely that many of the softer sex would fit Ludwig’s idea of heroic, though heroic they may well have been.

If any one state in Australia embraced the gold rush, Victoria would certainly be it and Walhalla had one of its richest seams, even today being reopened for mining. Yet little is heard of this place outside of the state, it’s left to places like Ballarat and Bendigo to fly the golden flag.

When Trollope visited in 1872 he was surprised to see a piano and a billiard table. He said, “… the mountains were so steep that it was often impossible to sit on horseback … I could not have believed there had been so much traffic across the mountains and through the forests had I not afterwards seen the things at Walhalla.” He was also suitably impressed by the standard of billiards played and found the Long Tunnel miners were as courteous as any people he had met.

The Long Tunnel Extended Mine gave forth 13 tonnes of gold and was only one of the seams worked in the area. In its heyday, 3,000 people were there, though some claim up to 5,000. That oft-used Aussie yardstick was here also, 10 hotels being supported in Walhalla during its prime.

The downside can be found on the hill on the eastern side of town. Astride the steep slopes are mature pine trees and, beneath them, the graves of over 1,100 people and the reminders of the human tragedy that befell so many. Children under five years of age make up a disproportionate number by today’s standards.

Ned Stringer was involved in the original grant with three others, but died intestate with a less than savoury reputation but Walhalla originally carried his name, Stringer’s Creek. He did not live to see the town grow as, in September 1863, 10 months after the discovery; he visited a doctor in Sale to obtain relief from a cold that had plagued him. After staying overnight at Toongabbie on the way home he had such a violent paroxysm of coughing that he burst a blood vessel and died.

Shortly afterwards the discovery of part of the massive Cohen’s Reef, which stretches from Bass Strait to Bathurst, led to the permanent settlement of the town. This was not alluvial gold and only large mining companies had the capital to exploit the find. The reef runs north to south on the western side of the valley. Ore-crushing batteries were transported to the township via Port Albert. The population of Walhalla and the six mining hamlets in the immediate vicinity (Happy Go Lucky, Mormontown, Maiden Town, Black Diamond, Homedale and West Walhalla) peaked at around 4,500 in the 1880s. Today some of these sites can still be reached by means of a signposted walking tracks around the village.

The trees in the area were felled, in part, by Italians from the alpine region in the north of Italy. They lived separately a little west of the town at Poverty Point by the Thomson River. The railway arrived from Moe in 1910, but instead of contributing to ongoing prosperity, it was, ironically, used to cart away the town’s buildings as the gold supply dwindled and the mines closed in the 1910s. Today the town’s economy is largely driven by its tourist appeal.

You can do different stuff like visiting the historic and interesting cemetery perched on the steep side of a hill. Indeed, it’s so steep that a coffin once slid off the back of a wagon en route to its final destination.

The very period oriented buildings still there now cater wonderfully for the tourist and have an authenticity about them that can’t fail to attract. Then, of course, what’s a gold mining town without a gold mine tour and you can rock up and see Victoria’s most successful mine, the Long Tunnel Extended, every day of the week.

The biggest attraction though, thanks to enthusiasts, is the Walhalla Goldfields Railway, a narrow gauge affair that follows a scenic route through difficult terrain and has fortunately proved to be very popular. Definitely a destination for your Victorian travels!

Have you visited an historic town in your travels? Do you like to ‘step back in time’ when you’re travelling?