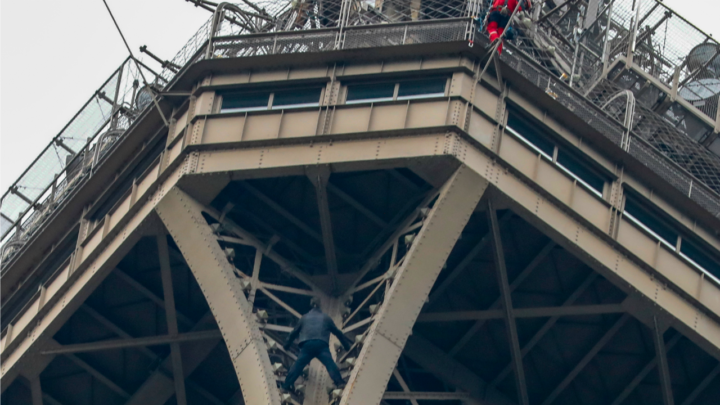 The man reportedly clung to the landmark for more than six hours. Source: Getty

France’s iconic Eiffel Tower was closed to visitors on Monday (local time) after a man was spotted climbing up the side of the Paris monument.

The climber, who has not yet been identified, clung to the landmark for more than six hours before emergency services eventually persuaded him to surrender, BBC News reports.

Footage has been circulating online which shows the man standing just below the third and highest level of the structure.

Eiffel Tower is currently closed as someone attempts to climb the 130-year-old landmark. https://t.co/QDsW9Zja9k pic.twitter.com/jhHjVoHlJ2

“A climber has been spotted. It’s the standard procedure: We have to stop the person, and in that case we evacuate the tower,” the tower’s management company, SETE, told AFP at the time.

A police spokesperson told AFP they’ve made contact with the man but don’t know yet why he climbed the tower.

Meanwhile, the Eiffel Tower’s official Twitter account announced on Monday that the famous landmark will reopen on Tuesday morning at 9.30am.

It’s not the first time someone has attempted to climb up the Eiffel Tower, which is about the same height as an 81-storey building. In 2015, British daredevil James Kingston climbed the tower without any safety ropes or harness.

More than seven million people from across the globe visit this iconic landmark each year.

Have you visited the Eiffel Tower?