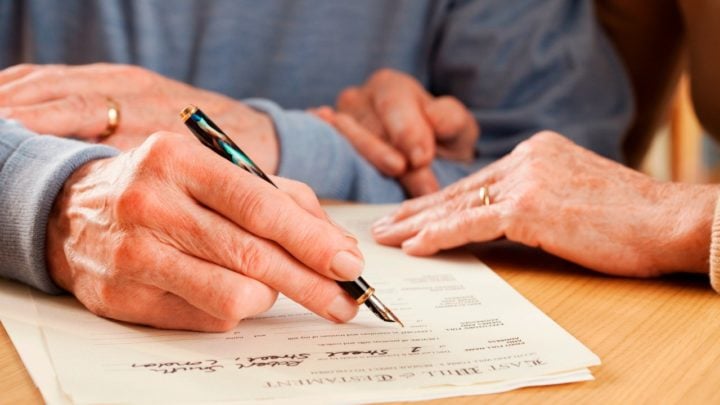 An estate litigation lawyer warned that DIY wills can be costly. Source: Getty.

Writing a will can seem like a daunting task and it is one which many people leave too late, however an increasing number of people also try to dodge the fees associated with compiling the legal document by putting together their own Last Will and Testament.

But a leading lawyer has now revealed the details of the weirdest wills he has ever come across and urged Australians not to rely on DIY wills, warning that while they can help to cut upfront costs at the time of writing, they can become more costly in future and potentially lead to further problems for those left behind.

Estate litigation lawyer Charlie Young, from law firm Bennett & Philp, said the only way to ensure your loved ones won’t run into any issues in carrying out your wishes after you’ve passed away is to seek help from a professional.

“A will drafted with professional assistance should avoid any potential interpretation problems and result in a valid, legal document,” he said.

“Those instances where people have tried to do it themselves to save a few dollars or they do a hurried job of it, unfortunately can result in big problems for those left behind if it’s unclear what the will is supposed to mean or whether it is valid at all.”

Not everyone gets help from a qualified lawyer though and Young revealed he has come across some wills that were far from conventional, including one which had been typed out on the deceased person’s iPhone shortly before the man took his own life. However, despite the unconventional circumstances, the will was actually granted valid by a judge.

“The circumstances of the first smartphone will were very sad,” Young said. “A young man faced an intense personal crisis and carefully typed out his wishes on the Notes application in his phone shortly before ending his life.

“The executor, who was the man’s brother, could not implement the will’s instructions because it did not comply with legal requirements, though the Judge declared it valid and the probate was granted. At the time, I believe the court’s decision that a will typed and saved on a mobile phone constituted a valid will was a first in Queensland, if not Australia.”

Read more: Risky business: Creating a DIY will could leave you thousands out of pocket

In another unusual case, Young explained that a middle-aged woman had left her will covered in small post-it notes, which seemed to outline her updated wishes about what should happen to her estate in the event of her death.

“When this came across my colleague Barbara Houlihan’s desk, she knew it wasn’t going to be an easy case,” he said. “After almost a year of litigation, the court ordered that the Post-It Notes were to be operative as the deceased’s last will.”

While, in another case, dealt with by Young, a terminally ill person had visited their local lawyer to prepare his will, however the lawyer’s notes – which were taken with the intention of typing them up at a later date – were almost unintelligible, with Young describing them as “chicken scratch”. However, the client passed away the following day, leaving the draft notes to be deciphered as his final wishes.

‘We had to perform a substantial amount of work for the executor in asking the court to approve the lawyer’s scrawled notes as the last will, which it did,” Young said.

Young also stressed the importance of having two witnesses present when you sign you will, as failure to do so could result in the will not being legally sound. Describing a past case, in which the witnesses had both signed the document but not the will-maker herself, the lawyer said he was left with no option but to take the matter to court.

He said: “Unfortunately, one aspect missing from a legal document can make all the difference and be a very costly exercise. The law sets out very strict requirements as to how a will must be executed.

“In this case, we had to track down the witnesses and explain in great detail to the court why they signed as witnesses when there was no will-maker’s signature to witness. The document was ultimately approved by the court as being the deceased’s last will.”

Read more: ‘My husband has no will, so will my step-children have a claim on our house if he dies?’

While you may associate the need for a will with the sick or elderly, Young also stressed the importance of all adults having a will in place, adding that anyone aged over 18 should look into it because it “makes things so much easier for the people left behind”.

Do you have a will in place? Did you seek professional help when writing it or did you compile it yourself?