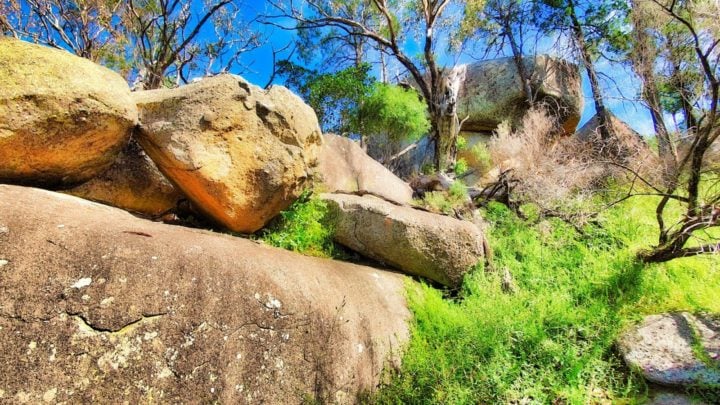 Bidens pilosa, also known as farmer’s friend and Cobbler’s pegs … There are things in nature that people don’t like, yet most of them have a reason for being. I mean, without flies, there would be no coffee, though, as a tea drinker, I couldn’t really care. There are others though, mosquitoes and leeches to name but two, to which I’m struggling to attach benefits to. Bidens pilosa falls into that same category.

I’d been talking to a friend of a friend who’d stopped to chat while I was doing my one annual repair to the long suffering motorhome. Deep into the conversation I started into the granite outcrops around Moonbi, New South Wales. Jim wanted to know if I’d been out on Tanglewood Road, just past the cemetery. Well, actually, no. I’d never heard of Tanglewood or knew where the cemetery was.

Abandoning my bird shooting expedition, that I’d half planned, in a matter of seconds, I got full instructions with the intent of heading off immediately after a cuppa. Somehow, without asking, I just knew it was going to be on private property.

The road was smooth and I took the turnoff opposite the Caltex as advised and headed in the direction of Limbri. It hardly seemed anytime at all than I was noticing formations of interest, two in particular. Trouble was, there were houses in front of the formations. I went on, another house and fencing but then, just when I was resigned to door knocking, there was an unlocked gate beside a Telstra mast. The saying is ‘In like Flynn’ and I took no prisoners so to speak.

While the heights seemed readily attainable, the weeds were in Easter party mode. They were in abundance after the recent rains and walking through them was going to be a nightmare. The rocks however, beckoned me on as I hid the Lambo and my backpack. I slipped through one fence and got to those granite pieces on the lower slopes. The cast-offs here were medium sized or smaller, obviously having broken off hundreds or thousands of years ago.

The main problem was you could only walk up to five steps before having to stop and find the best route, partly through the rocks, mainly through the weeds. I broke off over a thousand farmer’s friend, thereby severely denting the population by about 0.02 per cent. You couldn’t totally avoid them or the ground hugging soft vine that had a penchant for wrapping itself around your ankles and shredding its tiny round seeds in the tongue of your boot while doing it.

While there was some interest in the shapes, I had high hopes for what was to come. I turned left, on reaching the saddle, towards one of the two outcrops I’d seen from the road, broaching fences regularly though, at times, they were hard to see, such was the proliferation of the weeds.

Then, as I started to climb, it started to get interesting, mostly due to the size I expect. Boulders were significantly larger, the cracks more dramatic, the oddities more strange. I also started to catch glimpses of the next high point I would eventually get to as well, so I had some bearings.

Rocks perched precariously on other rocks, a massive shard sticking up without its mother lode like a giant broken eggshell, a tall rock coming to a sort of point. I saw them all before I got to arguably the largest and walked around the side. To say I was dumbstruck would definitely be an understatement for there, right before me, was one of the strangest I’d ever seen.

About 35 per cent of the largest I’d come across had disengaged, following two massive fault lines; one horizontal and one vertical. My head was shaking from side to side as I got closer, scrambled up some of the smaller fallen remnants and peered inside. It was extraordinary, both fault lines had parallel patterns of colour, probably an indication of what exactly had happened here. It was some time before I left it, still in wonderment.

I turned back, got through another fence and headed across the next saddle. More bloody farmer’s friend. My boots were once again uncomfortably filling up with seeds. I crossed over another fence. There are no trails, just relentless knee to waist high weeds. My curiosity was my sole driving factor.

The ascent was steeper than the previous one and there were no shapes in the saddle; nothing until half way up the climb. I approached a squarish one with a large semi-hemisphere on top and, beyond it, a tall tower of a rock overshadowed them both.

Near the top the weeds flattened out and when I neared the largest outcrop it was sad to see that someone had painted their initials on it. I scouted around to the front that overlooked the valley beyond, squirmed along a slanting crack and made it almost to the top where all manner of granite destruction was taking place, judging by the odd shapes. Weather, the ubiquitous fig trees; heavens, there was even what I took to be rabbit dung in clutches on top of several of them.

I sat down and did my shoes again. It seems to take ages to do a good cleanse, trying to remove every last irritant but always missing one or two. Still, the vast panorama made it a good place to stop.

Then I cut across the front of the formations and reached another huge one, seemingly almost ready to slide down the hill judging by its undercut. I couldn’t get underneath it, the down slope being beyond my capabilities so I climbed again and then turned right for home, slowly working my way back across the second saddle. I’d already seen the stuff at the top of that mount so there were no expectations.

You know what, the thing that I’ve learned here is that you only have to move a couple of metres in a different direction and you might be blown away. Well, I found a massive crack and worked my through to the other side. Not a lot to see on the other side; some interesting shapes, a wavy tree bark just before I passed another big rock.

Nothing prepared me for what evolved in the next 10 metres for here was one of the most extraordinary formations ever. It looked for all the world like a giant mouth. Two large flat surfaces at around 140 degrees to each other. I knew while looking at it I’d never see its like again. It was hard to photograph because a. you couldn’t get a decent angle at it and b. I couldn’t stop gawking.

For the next hour while I slowly worked my way back I couldn’t get it out of my head. I’ve been to Girraween, done Boonoo Boonoo (pronounced bunny banoo in case you were wondering), climbed Bald Rock (several times) seen Draining Rock out of Tenterfield yet nothing was any better than what I’d seen here in the Moonbi area during two of the last three days.

My blister burst on my left ankle, my arm was bleeding from scratches and I stubbed my right big toe. The pain was excruciating, I doubted I could continue, but it eased after a minute or two. All travails were overcome by the persistent memory of what I’d recently seen. I was so happy when I reached the bike, full in the knowledge that the road home was all downhill but had to pause after I got through the gate for another exorcism of seeds. Only then did I notice that both soles on my expensive Scarpa hiking boots had all but come adrift after only half a dozen outings.

They have a potential tourist attraction here; it’s just that nobody realises it yet!

Do you enjoy getting off the beaten track?