From Florence with love: Roaming the streets Tuscany’s incredible capital 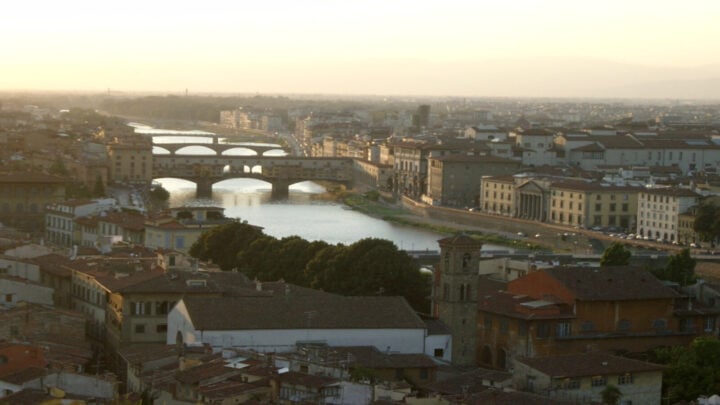 Firenze, or Florence, the capital of Tuscany, was declared a World Heritage Site by UNESCO in 1982 for its culture, Renaissance art and architecture, museums, art galleries and monuments. On our road trip through Italy this was high on our bucket list of places to see.

Arriving by car and unable to find our accommodation among one-way and pedestrian-only streets, we accidentally ended up driving into the Piazza della Repubblica – a pedestrian-free zone. This is the main and most central square in Florence, dominated by the huge Arch of Triumph with arched porticos on either side, ringed by hotels and restaurants and the venue for many street artists and exhibitions. Luckily the Carabinieri (police) were very understanding and showed us how to reach our hotel.

Our accommodation was a former palazzo with its old fresco work still visible on the exterior as well as in patches in our room. It was a very large room with windows overlooking the street. Strangely, the shower enclosure was positioned against that wall between the two windows! There was no lift and with our room on the third level we decided to pack a small amount of clothing and necessities into our day packs and leave to rest in the car. The next issue was to find somewhere to leave the car, because no parking was allowed nearby. Eventually I found a parking lot at a small marketplace that would allow me to leave the car until 7am the next morning without charge. I had a long walk back to the hotel.

It was only a short walk from our accommodation to all the main attractions. At the heart of the city is its Duomo, a cathedral that’s fabulous any way you look at it, from its decorative green, pink and white marble, to its imposing dome designed by Brunelleschi, its campanile (belltower) and Baptistery, and its wonderful bronze front doors. Begun in 1296, the cathedral dedicated to Santa Maria del Fiore took almost 150 years to complete. The highly decorative neo-Gothic façade was added in the 19th century. It is possible to climb the spiral staircase to view the interior of the dome and a panorama of the city. But despite being in Florence on two occasions, I have not been able to manage a glimpse inside due to its limited opening hours.

The other places of interest on our list were the Uffizi Gallery and the Accademia, where the statue of David resides, the Palazzo Vecchio and the wonderful old Ponte Vecchio across the Arno River. Late in the afternoon we took a walk up the hill on Piazzale Michaelangelo, ignoring the multitude of souvenir stands with David aprons and boxer shorts, to find great views of the city, particularly at sunset.

At the Uffizi we paid extra to jump the queue and it was worth it, as it is a very popular place. We hired an audio guide, which helped explain the various paintings from medieval times up to the eighteenth century by luminaries such as Michaelangelo, da Vinci and Caravaggio. Some paintings mentioned were away being restored and the Raphael room was not available for viewing, but on the whole it was wonderful.

The Ponte Vecchio is a fascinating structure, with small shops hanging out precariously over the sides. The majority of the shops sell gold and silver jewellery, although art and souvenirs can also be found. This was one of the most crowded areas in all Florence. I managed to get a great view of it from a window at the Uffizi.

On the top level of the buildings that span the bridge is a secret passage that enabled the Medici family rulers to access the Palazzo Vecchio (Town Hall) from their unusually plain palace (Palazzo Pitti) on the other side of the Arno, without having to mingle with the riffraff. Successive owners of the Pitti Palace amassed paintings, porcelain, jewellery and luxurious possessions, which are now on display in the palazzo – now the largest museum complex in Florence. At the rear of the palazzo is a large formal park and gardens, known as the Boboli Gardens. If you intend to explore the museum and gardens allow plenty of time and don’t turn up an hour before closing like we did, expecting to get in – they won’t admit you!

The Palazzo Vecchio, with its Torre di Arnolfo, is at once austere and imposing. Now also a museum, it contains various murals and art work by the celebrated Michaelangelo, da Vinci and Donatello, among others. Outside, in Piazza della Signoria and the Loggia dei Lanzi, sculptures of mythological heroes Hercules, Neptune and Perseus are thought to represent the power and influence of the ruling Medicis. Nearby, a copy of the David attracted tourists to get their selfies, which they were unable to do in the Accademia. However, we ran out of time to visit the Accademia on this occasion.

The second time we went to Florence, we arrived on a tour bus that dropped us a short walk from Santa Maria Novella, with its distinctive green and white marble façade. It was the first great basilica in Florence, begun in the 13th century, and finally capped by a black and white upper panel in 1470. Interestingly, the ‘blind’ arches that ring the building, seen clearly on Via degli Avelli, actually enclose tombs of the wealthy Florentine noblemen who financed the decoration and additions to the church.

Our tour took us to many of the places we had seen before, but this time we learned a bit more about the city’s history and buildings. It also allowed us time to browse the shops and buy souvenirs in the San Lorenzo market. The market is actually comprised of two separate markets, an indoor market known at the Mercato Centrale, home to all things food, and the outdoor section that lines the surroundings streets selling leather, clothing and many souvenirs.

This time we finally managed to visit the Accademia and at last see Michaelangelo’s David, which dominates the central gallery. It was much bigger than I had imagined and unfortunately, as with most galleries, photos were not permitted. Hopefully there will be another opportunity to visit Florence again and this time see inside the wonderful Duomo!

Have you ever visited Florence?