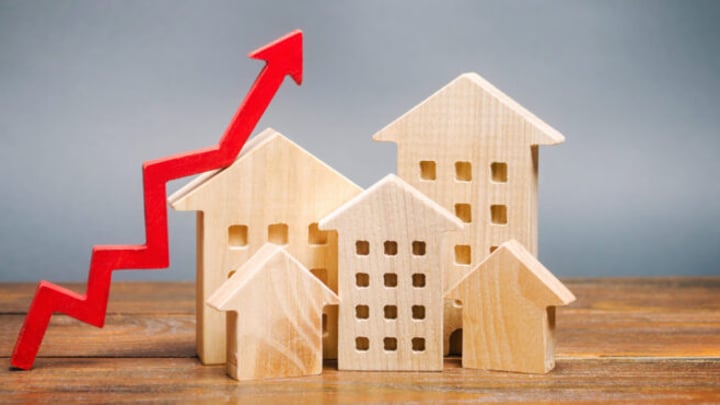 Sydney and Hobart were the strongest markets in February, with both recording a 2.5 per cent jump. Source: Getty

Australia saw housing values rise by 2.1 per cent in February, which was the largest month-on-month change in CoreLogic’s national home value index in 17 years.

Housing prices are surging across each capital city – and likewise in regional areas – in a synchronised upswing that hasn’t been seen in Australia in more than 10 years. Tim Lawless, CoreLogic’s research director, said, “The last time we saw a sustained period where every capital city and rest of state region was rising in value was mid-2009 through to early 2010, as post-GFC stimulus fuelled buyer demand.”

The combination of record low mortgage rates, low supply, improving economic conditions and government incentives are all believed to be contributing to the widespread boom.

The value of new home lending reached an all-time high earlier this year, with the Australian Bureau of Statistics’ latest figures showing the value of new home lending hit $28.75 billion in January, up 44 per cent, year-on-year, in seasonally adjusted terms. The total value of owner-occupier home loans settled in January was $22.11 billion – also a record high – up 52 per cent year-on-year.

Sydney and Hobart were the strongest markets in February, with both recording a 2.5 per cent jump. Melbourne came in third place with a 2.1 per cent rise, while Canberra came fourth with a 1.9 per cent increase.

“Whether this new found growth in Sydney and Melbourne can be sustained is unclear,” Lawless said. “Both cities are still recording values below their earlier peaks, however at this current rate of appreciation it won’t be long before Australia’s two most expensive capital city markets are moving through new record highs.

“With household incomes expected to remain subdued and stimulus winding down, it is likely affordability will once again become a challenge in these cities.”

Smaller cities fared better in CoreLogic’s quarterly results, with Darwin housing values seeing the biggest surge: 5.5 per cent in the past three months. Hobart came in second place for the quarter, with values increasing 4.8 per cent, while Perth came third with a rise of 4.2 per cent.

Regional markets (up 2.1 per cent over February) have continued to show a higher rate of capital gain relative to the capital cities (up 2.0 per cent), however the performance gap has narrowed compared with the earlier phase of the growth cycle, according to CoreLogic’s results.

Regional areas typically recorded less of a decline in housing values through the worst of the Covid-19 period last year, and also showed an earlier and stronger growth trend during the second half of last year.

This regional preference is reflected in the annual growth trend, which saw a 9.4 per cent rise for the combined regionals index, while the combined capital city index was only up 2.6 per cent for the same period.

Unit markets have showed a weaker performance relative to detached housing, a trend that has persisted since the Covid-19 period. Units rose just 1.4 per cent in the past three months, while house values rose 4.4 per cent over the same period, according to CoreLogic’s combined capitals index.

Do you find this new data surprising? Or were you expecting it?