Remember taking part in the Sing! Program at primary school? 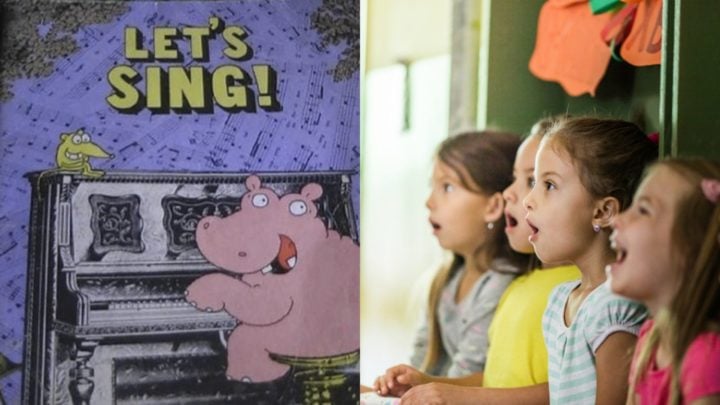 The Sing! program in primary school was a favourite activity for many Baby Boomers growing up. Source: Facebook/ Adelaide Remember When and Getty

You may not have turned out to be a professional singer, with most of your singing nowadays done in the shower or the car, but the Let’s Sing! Program certainly helped to keep kids entertained in primary school.

Created in the 1950s, the program quickly became a part of the music curriculum in Australia, with students gathering together to sing along to either a radio broadcast, or for more remote students a cassette. The tunes ranged from bizarre songs such as ‘You can’t roller-skate in a buffalo herd’ to more popular hits from The Beatles. And you can’t forget the seasonal songs which came out around Easter and Christmas to add some more festive cheer.

Initially the program was designed to help expose children to the diversity of music, whether it be political, melancholy, popular or just downright odd. But it no doubt became a favourite activity for the more musically inclined who would rather sing a song with their peers than practice times tables.

Each student was given a copy of a songbook and would sing along to whatever tune the radio broadcast had nominated for the week – whether they liked it or not. And over the years kids could recite the regular tunes with ease, with favourites including ‘Skye Boat Song’ and ‘Soldier, Soldier Won’t You Marry Me?’.

Nowadays, Baby Boomers still have fond memories of their time singing at school, with many taking to social media to share stories from their primary school days. And for most – the Sing! program was a real highlight of schooling.

Chris Kendall shared a memory; "Who remembers, as a kid, the old Let's Have Music and Sing sessions that would be on ABC…

Posted by Adelaide Remember When. on Tuesday, 12 July 2016

“The radio room was downstairs at our school. The radio was bigger than a dishwasher, had switches across the front and a couple of big dials,” David Kynaston wrote on Facebook. “It was where the principal would make her announcements and switch on the radio for this programming.”

“Earlier in the 1950s we used to listen to ABC‘s Alvie Penrose and with our books we would learn a new song every week,” Lorraine Gregory said. “Our primary school consisted of all seven grades in one room with sole teacher Mr Ray Webb. He was a great teacher, but with limited musical ability, so if I couldn’t remember the tune for our new song of the week, we simply couldn’t have a practice ready for the next broadcast.”

While Josie Watson said: “My favourite song was ‘Senior Don Gato’ about the cat who fell of the roof. My kids think I’m insane when I try to sing it to them now! So much better than the music kids are learning now!” And Heidi Rickard added: “One of my favourite memories of school. I remember the speaker in the classroom as well. Fun times!”

Over the years the program changed names and with the rise of technology, the use of radio broadcasts and cassettes were replaced by a published kit containing songbooks, teachers handbooks and recordings. While not all schools across the country take part nowadays, singing has continued to be an important part of music lessons in most primary schools, whether it be through choir or musical productions.

Do you remember being involved in the Sing! program? What was your favourite song?