Remember those days of the old schoolyard 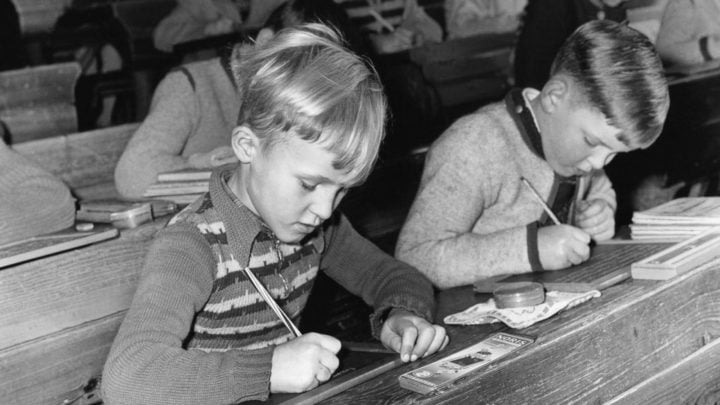 Remember writing on a slate with a slate pencil? Source: Getty Images

My how times have changed! You probably have strong memories about the first time you attended primary school in the 1950s and ’60s. If you talk to students today, one of the biggest things that catches their attention is that when you were going to school there were no computers, no internet, no iPhones or iPads or any such digital devices. Their eyes wide, they ask ‘How did you survive?’

Easy — books were the main source of research. Typewriters were used to write papers and teachers wrote on blackboards with chalk. There was no such thing as a ‘smart board’ or ‘white board’ in the ’50s and ’60s. If your teacher wanted to show you a video in class, it’s likely he or she would have used a film projector in the ’50s.

Technology wasn’t the only major difference in schooling. Back when you were going to school there was a real emphasis on discipline and real consequences when you were naughty. The cane was something to be feared! Such acts of discipline today would be regarded as a criminal offence.

Of course getting to school you probably walked, rode your bike or caught an early form of ‘public transport’. For some it was a bit of an ordeal, while others saw the journey to school each day as more of an adventure.

Back in the ’50s and ’60s, your teachers were always addressed as ‘Sir’ or ‘Miss’. You were also bound by a proper dress code. If there wasn’t a uniform, female students were most likely required to wear skirts or dresses that covered the knee, with pants of any type being forbidden. You could forget about wearing anything sleeveless too, it was blouses all the way. Male students would wear trousers. Shorts weren’t allowed and jeans were forbidden. Traditionally, the boys would wear a button down shirt and possibly a neck tie.

The school curriculum was crammed like it is today. The main subjects you were likely to have learned in your early school years were English, arithmetic, history and geography. Your English lessons were made up of reading, spelling, punctuation, dictations, writing compositions or essays and handwriting practice. Arithmetic was tables, mental arithmetic, written arithmetic, measurement and geometry.

There was no such thing as nursery school, preschool or prep in the 1950s and ’60s, so the first time many of you would have attended school was when you turned five. That first day was likely to have been filled with a few tears, as it would have been the first time in your life that you’d been on your own away from home and away from your mother.

Who remembers chanting “‘a’ like an apple on a twig; ‘b’ like a bat and ball; ‘c’ like a cake with a bit taken out …”? This was how you learned the letters of the alphabet, what they looked like and the sounds they made. You also started learning how to count from one to nine in those first few weeks of school.

Writing was done on a slate and you used a slate pencil. Sometimes you’d be asked to bring to school a rag and a small tobacco tin that contained a sponge in a mix of water and disinfectant so that you could wipe the slate clean and dry it for reuse. It was a big deal when you progressed from slates to notepads and pencils.

Classes, which often had more than 30 pupils in each room, of the day were very much a ‘talk and chalk’. Your teacher would stand at the front of the class and you would sit in desks facing the board. Field trips and school excursions were incredibly rare occurrences.

Your school day usually commenced with parade. You’d line up in your class, accompanied by your teacher. The head master (now commonly known as the principal) would be standing at the front facing you. He or she would bring you to attention, where your feet would be brought together and your hands would be at your sides, and the school band would belt out the national anthem, which was probably ‘God Save the Queen’. Singing the national anthem was a sign of pride and respect you had for your nation. After the anthem had been sung, you’d march into school.

In the United States, segregation was present throughout the ’50s and ’60s even though the Supreme Court was working to stop this. White and black students were expected to attend different schools based on their nationality.

You’d have two breaks in your school day. The first was around morning tea time and affectionately known as ‘little lunch’. It was an opportunity for you to have a snack, a drink and go to the toilet.

During this first break most schools around Australia and the United Kingdom would be provided with a small glass bottle of free milk, about one-third of a pint. Many of you will probably recall the temperature of the milk, because it was often warm by the time you got it delivered. In Australia this initiative was introduced by the Commonwealth and was to supplement the child’s diet.

The other break was ‘big lunch’. You’d pull out your homemade lunches (sandwiches and fruit) from a brown paper bag. Buying lunch at the tuckshop was an exception, rather than the rule. Most families were living off one income. If you ordered from the school tuckshop, you’d write your order on a brown paper bag and a lunch monitor would take them down to the tuckshop so your order would be ready in time for lunch. Tuckshops were often staffed by volunteers, your parents. The tuckshop would use whatever money was made to purchase school equipment such as slide projectors, tape recorders and other teaching materials.

After you’d finished lunch (or swapped it for something better) a bell would ring and you could go off and play. Handball, soccer and cricket were popular and required no teacher input into their organisation. There were also monkey bars, swings, climbing frames and fierce games of marbles happening in the playground.

Yep, as a child of the ’50s and ’60s school was certainly a lot different.

What do you remember of your early school years?