Forensic file: A cop sees some sickening payback for a shocking crime 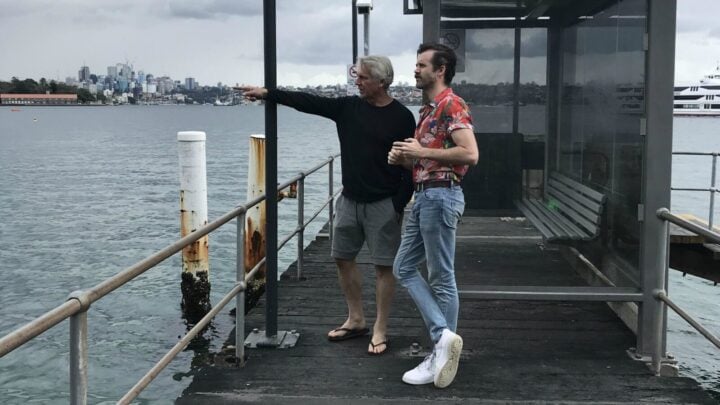 Paul Verhoeven’s book Electric Blue reveals his father John’s grisly experiences as a forensic detective in the ‘70s and ‘80s.

Disco was big. Really big. John would head along to discos in platform shoes, hair permed and sprayed to within an inch of its life. Floors were illuminated, even if gender politics were not. John would get dressed up, douse himself in some unpronounce- able Italian scent, and swagger his way over to the city with his friends. Some weekends, however, they’d stay local, which in his case meant Manly. The bustling beach suburb was unbear- ably beautiful. Natural beauty. There was nothing natural about the Hotel Steyne, though, and that’s where John was headed one fateful night.

He was wearing a safari suit, his hair was a mile high, and his feet were ready for dancing in two-tone Florsheim platforms. Given that John was six feet tall, he was on the verge of suffering an attack of vertigo, but he soldiered on regardless. Entering the Steyne, his eyes straining from the pulsing lights and stinging from hairspray fumes, he set about finding himself a good time.

The Steyne had a carvery: a bistro with a cafeteria-style bar covered in bain-maries. John, bleary-eyed, wobbled up to the bar, grabbed a plate, and joined the queue. No sense partying on an empty stomach, even if that stomach was in danger of succumbing to little other than altitude sickness. And as he made it to the server, he made eye contact with the man, who was wearing an apron and holding a carving knife.

‘What can I get you?’ the man, swarthy and blond but other- wise fairly featureless, asked in a thick German accent. John asked for the lamb. He always, every time he came here of a weekend, grabbed the lamb, and he always seemed to be served by the same German.

‘Why are we talking about a German man who served you at a carvery before you became a cop?’ I ask.
Dad brandishes his Moleskine at me. ‘Trust me.’

A few years later, when John was settling in nicely to Forensics, he’d left his disco days behind – mercifully – and Grey had apparently been talking him up around the station. In backrooms, down corridors, there was some gentle buzz building about the cop who’d turned down being a detective to pursue a career in Scienti c, and this meant that people were asking for John on occasion… and not just to have him pick locks.

One quiet Saturday evening, Grey got a call for John to head over to Babcock House, detective HQ. John nodded, grabbed his gear and trotted out to the Kingswood. Just John, the detectives had said. Alone.

I suppose, he thought as he drove towards his destination, I’ve proven myself now.

John, as has been established, did not adore detectives. He still pined for the potential of the office, of what good, motivated people with their station and powers could achieve, but he’d seen things that had driven him away from that particular career path. Terrible things. He was ruminating on this as he pulled up out the front of the towering, ashen building and made his way over to the two detectives who were outside waiting for him. Waiting. For him. Odd. This whole thing was a little odd.

John shook their hands and introduced himself, and they led him to their impound lot, down a ramp and into a badly lit car park. John let his eyes adjust to the light, and found himself standing in front of a white Holden Commodore, a fairly non-descript sedan.

‘John,’ said the lead detective. ‘Grey says you’re hot shit, so listen up. We have a bloke upstairs, and he’s being questioned. Vigorously. He’s not giving us much, but this … this is his car. Bloody hard to find. And we need you to sweep through the contents of the entire thing. Fair warning – there’s a lot of shit in this car. Fella wasn’t exactly a clean freak.’

John peered inside and began slipping his gloves on. ‘Sure,’ he said, facing the detectives. ‘What are you looking for? Fingerprints? Circumstantial evidence?’

The lead detective nodded grimly. ‘All of the above.’

Once the men had left, tramping up the stairwell that led to the circuitous insides of the building, John looked around at the car park. Most of the spaces were taken, he noted, by what looked like cars belonging to detectives: an array of eccentric, ashy cars favoured by the Ds. Which is strange, John thought, because on Saturdays, not all detectives would normally be at work. There’d be a skeleton crew instead. So what could have brought so many of them here, all to the one place, on a Saturday?

John looked back at the car he’d been told to analyse, cracked his neck, and got to work. And what he found was bizarre.

Pornography. John had never seen quite so much pornography in his life. All magazines, but thousands of the damned things, piled high and well cared for. After an initial assessment, he pulled out his camera and began photographing. The boot was worse than the back seat, absolutely crammed with Penthouse and Hustler, and once he’d done his pass with the camera, he began dusting for prints. Hunched over in the dim light of the car park, he refleected on his career trajectory. He’d wanted to be up there, floors above, solving cases as a detective. Instead, he was in the basement, running a fine, dewy brush across a litany of well-oiled centrefolds.

‘Can you imagine what life would have been like if you—’ But I’m cut off mid-sentence by an impatient look from Dad.

Once John was done, he collected his camera, his prints and what was left of his dignity, and walked back up the ramp and out onto the street. As his eyes adjusted to the sudden wash of light, he got his bearings and decided to head up via the lift and deliver the results of his search to the detectives. He headed into the foyer through large glass doors, got into the small metal box, shifted uneasily on the squares of orange carpet inside, and before long was deposited on the fourth floor. Across the way, he immediately saw one of the two detectives from the car park standing out the front of an open door. John trotted over, and was suddenly struck by an odd smell.

The detective, looking more dishevelled than John had remembered, nodded hello and extended a hand to take the files.

As John passed them over, he caught a glimpse of the suspect, just a brief glimpse, sitting in a metal-backed chair, eyes hollow, tears streaming down his cheeks. Someone inside slammed the door shut. The detective gave John a flash of an apologetic look, took the files and John’s film, and leafed through the pages. As the detective read, John couldn’t help but notice a faint brown smudge on the man’s untucked shirt. He caught John looking, and gave John a truly odd glare. And John thought… You know what? Fuck it. I’ve earned my way. These people don’t scare me.

‘So what’s the story?’ John asked, bold as brass. And while the detective seemed almost taken aback, he began to answer. He answered openly and honestly. And very soon, John wished he hadn’t prodded the bear.

‘The bloke in there? You just did a sweep of his car. Pervert, yeah?’

John nodded back, conceding this point.

‘Right. Well, your job here is done. But I’m happy to fill you in. Least we can do to thank you for your help.’

‘That bloke, in there, is bad. Real fucking bad. He worked for years on a work permit over on the Northern Beaches. And what he’d do was pick up hitchhikers. Regularly. And what he used to do… Are you sure you wanna hear this, mate?’

John looked deep inside himself. He could have said no, of course. Perhaps he even should have said no. But to someone who digs, who seeks the truth, being given the facts is like a drug. So I really don’t have a choice, do I? he thought. I’ve come this far. ‘Shoot,’ he said.

‘Well, let me give you a specific example of the stuff this animal did. One we’ve been chasing for a while. He picked up this nurse, and he took her to a quiet spot in a fairly prominent park up near Lane Cove. And what he did was . . . he has a scat fetish. He likes shit. And he’d get the girl to remove shit from her own . . . you know. Then he’d rape her, do all sorts of horrible stuff to the poor girl. Then he’d throw her out of the car, run her over, and set fire to the body. And…’

The detective’s facade shifted, and just for a moment, John saw a scared, furious young man. Only for a moment, though. The detective ploughed on, almost as if moving past the horror at high speed would leave it in his emotional rear-view. ‘So we found out he was also wanted in Germany. This is after we caught the cunt, mind. We finally track him down and get told he’s gonna be extradited, pulled out of our hands. He killed so many women, mate. So many. So me and the lads—’ the detective jerked his thumb back at the door ‘—so me and the fellas decided to do a whip around. Get him a farewell gift. One we thought… poetic.’

John pointed to the brown smear. The detective followed his finger, looked back at John’s face, and nodded. ‘We all took turns. Filled a bowl all the way to the top. And that fuckhead isn’t leaving until he’s done eating.’

A long, terrible pause. The sound of sobbing eked out from under the door.

The detective thanked John and turned to leave. And that’s when something struck John, something he should have cottoned on to sooner. ‘Mate,’ John said, voice shaky. ‘Where… where did you say those extradition orders were coming from?’

‘Oh,’ replied the detective over his shoulder. ‘Germany. He’s German.’ And with that, the man returned to the interrogation room, and John stumbled to the lift in shock. He finally knew where that face was from, the face he’d glimpsed, tearful and hollowed out, inside the room.

A German. The German man who worked at the carvery. Over and over, weekend after weekend, during the period in which those women had been killed, John had been standing in front of a murderer. Worse than a murderer, in fact.

John stamped down any desire he might have had to wonder what he could have done to stop the murders. What would have happened if he’d known? Would he have reached across the carvery bar and grabbed the knife, plucking it from the man’s hands? Would he have called the cops then and there?

‘No,’ he muttered madly. ‘No. Nothing you could have done.’ Some people are just broken.