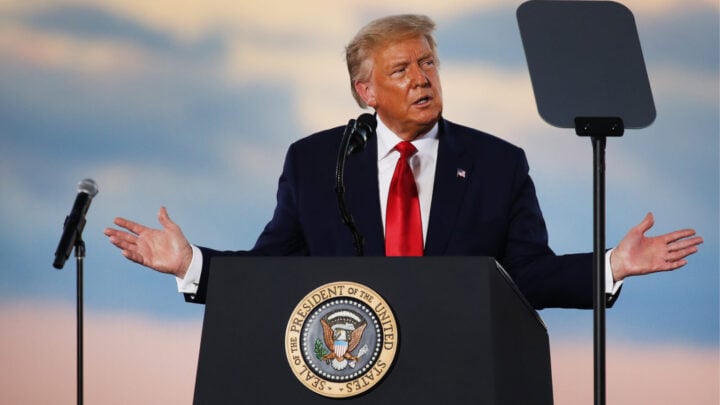 One community blogger has discussed his opinion on Donald Trump and his latest speech. Source: Getty

Four years ago, I would not have thought it possible. Four months ago, I must admit that my anxiety was stirring. Four days ago, I hoped and prayed it was not going to happen. But on Friday evening, it did.

I had spent that Friday doing all the small, mundane things that make up a life in the 21st century: washing dishes; meeting a group of like-minded people to turn the tide of regional media closures with our own local newsletter; having a doctor’s appointment; visiting the motor registry to hang on to my licence; buying a treat for Number Two son at the local bakery; chatting on the mobile to Number One son struggling with a lab experiment down in Sydney; and having a quiet coffee with my wife at a local patisserie.

Then home again, to watch Tony Robinson striding across the UK’s North Downs on SBS On- demand; to have dinner; to wash more dishes; before my wife and I retired to the living room for the evening news. And that’s when it all began to unravel. You see, the big event of the evening was not Covid-19, but the speech of Donald Trump — a man I should concede I do not trust — accepting the nomination of the US Republican Party for another term as president.

For three days previously, there had been a steady build-up to the big moment with flunkey after flunkey appearing remotely to extol the virtues and successes of the Trump presidency. Which you would expect, given what was at stake. But Friday night was something else again, as Americans like to say.

It was like I was witnessing a reality television show: objectively unreal, that is, but actually horrifyingly real. With the huge, amphitheatre-like White House as the backdrop, floodlit against a pitch-black sky. Before it, an enormous platform, thick with more Stars ‘n’ Stripes flags than I had ever seen in one setting. The audience, an awestruck distance below the podium, packed with political reptiles, as you’d expect, plus a cohort of black-shirted cops making their preference abundantly clear.

But then the spotlight picked up two distant figures emerging from the top of the amphitheatre, moving slowly, suspensefully, down a catwalk, the President on the arm of his loyal consort, towards the podium. While in the sky above, flashing lights emblazoned the script TRUMP 2020. Could I be imagining I was watching the opening frames of a Leni Riefenstahl movie? That, by some trick of technology, I had been spirted back to Nuremberg 1934? Only the President’s speech would tell.

But there was to be no Abe Lincoln’s sobering reminder that a country cannot survive “half slave and half free”. No Teddy Roosevelt’s promise of a “chicken in every pot”. No John F. Kennedy’s call to “ask not what your country can do for you, ask what you can do for your country”. Mr Trump was reading from an altogether different playbook.

He excoriated his enemies as radicals, extremists, socialists, arsonists, rioters, and more; he praised his own performance in managing only 180,000 deaths from Covid-19, promising a vaccine before Election Day “or even sooner”. (At this point, my stunned wife asked whether, by this, Trump meant last year.)

It went on, becoming more vicious and divisive by the second. The cultivation of fear from the Unseen Other – “they’re coming to your city, your town and your suburb”, as Rudy Giuliani had warmed them up earlier – to the wild applause of the cop-bloc present, who seemed comfortable with the belief  that The Other had no equal rights before the law.

But towering over all this fear and panic, was the one resolute thing that stood between barbarism and YOUR safety. A man, alone. But with the will to overcome America’s enemies – who seemed thicker on the ground inside the United States than outside, if one took the thrust of Mr Trump’s address at face value. Only one thing can save America, was the president’s message: the Triumph of the Will.

Some will say that to compare Trump with Hitler, despite the alarming similarities in the events’ choreography, is unfair, pointing to the mere 1,500 Washington audience versus the 100,000 at Nuremberg, the absence of torchlight parades and black-shirted SS goons, the shrieking Josef Goebbels,  the slander of Jews and communists, and so on.

I hope they’re right. But what I felt on Friday evening was Hitler and Nuremberg transported to the 21st century, with all the technical wizardry to put your name up in lights for billions to see that don’t need massed ranks of goose-steppers to persuade a mere 100,000 in the amphitheatre. Although 85 years apart, I saw the Triumph of the Will once more and it terrified me. For the first and only time since the Cuban missile crisis of October 1962.

Meanwhile, as Mr Trump was thrusting a scorching laser into the stomachs of The Other, the real enemies were fishing in waters vacated as the US turned in on itself, leaving its friends and allies around the world utterly bewildered. As first Crimea, then eastern Ukraine, then the South China Sea, then Hong Kong, and now Belarus seem destined to slip behind a new iron curtain. And Kim Jong-Un still has his missiles.

But all couldn’t be lost, I prayed, as I switched over to SBS to watch jolly, beaming Bettany Hughes continue her Greek island Odyssey in the wake of the eponymous hero of Homer’s Trojan epics. Though probably mythical events of about 2,800 years’ vintage, they still seemed to breathe with a genuineness and sincerity that I, for one, would never accuse Mr Trump’s acceptance speech of.

And, moreover, she didn’t just cart us around to the usual tourist traps for ancient history buffs, she introduced the Greeks themselves, be they fisherfolk or museum curators, all of them people who lived daily lives saturated in the openness and honesty that exudes from the pages of Homer. And seemed rather happier for it.

It saddened me that for all my years of longing, I probably won’t get to Greece and the Aegean islands. Nevertheless, Bettany Hughes almost convinced me that, despite the ugliness of Trump’s presidency, our human heritage, fired by the experience of thousands of years of living history, is not entirely extinguished.

More settled in the moment, I flicked over to 7Mate to watch the Bulldogs squander a six-goal lead over the Cats to go down comfortably, just about pole-axing their finals prospects. This was far too metaphorical for my taste so I retired to bed early hoping the morning would reveal it had all been an atrocious dream.

What are your thoughts on Trump and America's future?