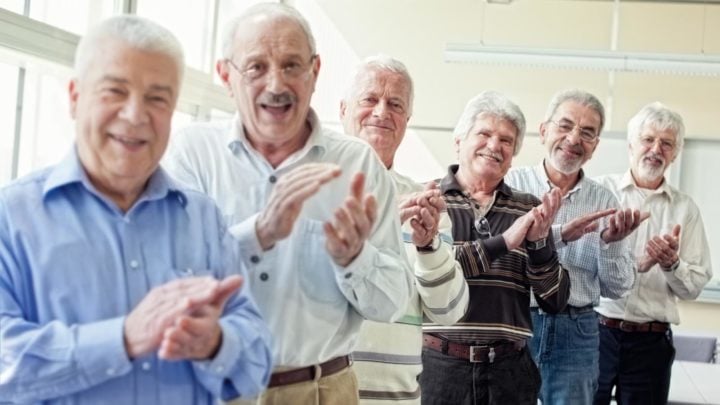 We are all creatures of habit, some keen-eyed philosopher once wrote. While to some, habit equals conformism equals the waste of a life, I think that if each of us examined ourselves honestly and fearlessly, we would probably have to admit that there is great comfort in knowing that each day unfolds, more or less, without any short, sharp shocks.

Short, sharp shocks are for the young and for those lucky oldies with the resilience to take them on the chin and then bounce back. Most of us, by the time we reach the moment of graceful retirement would prefer, well, a graceful retirement. Sure, we make certain there is plenty in our lives to keep us occupied, even to expand our horizons, if we are of the adventurous type, but few would see any virtue, say, in the excitement of a truck hurtling through your front fence at 2am. Or a pandemic, for that matter.

I think sociologists call it culture; you and I would probably call it habit or custom. Yet I sense a very real need out there for connection and rootedness among people, a need that wasn’t so evident in our parents’ day. I’m not talking about joining here — there have always been joiners, of sporting teams and old-time dancing clubs and choral societies, if your interest takes you in the collective direction.

What I mean is something deeper than that — a need to identify an element in yourself that touches something that is bigger than ourselves. Let me explain. The most obvious manifestation of this need is the stupendous growth of the ‘ancestry’ industry. It is not enough, apparently, that you are you and I am me, nor that we have our good and poor points, on which others can make judgements.

According to the ancestry industry, whatever trace of exotic blood can be scraped from the lining of your veins is what defines you, nothing else. (Which doesn’t say much for the performance of the ‘education’ industry, does it?)

To me, this phenomenon, which had no currency 30 years ago, reached its idiocy in a television ad whereby a surfer was able to explain his skill on a board by the discovery of ‘Viking’ roots in his DNA. I hope it was all tongue in cheek, because my wife has some ‘Viking blood’ and she’s terrified of the surf, whereas my English ancestors would not have recognised a wave if it broke over them. And I love surfing.

Once again, it is the Americans who seem to be in the vanguard of this strange obsession. Look at the Wikipedia entry for any American screen star and, first up in the ‘personal’ section, you will be inducted into a tour of inspection of their genealogy, sliver by sliver. But to what end? Personally, I’d prefer to know what they had or had not done, whether they had any talent or were just journeymen triers, as more reliable guides on whether their movies might be worth watching.

To come to grips with this odd phenomenon, I recently tried to read a book on the literary differences between Americans and Brits, by the English poet Stephen Spender. Now, he should know, having collected a backwash of dirty gutter water when, as joint editor of the trans-Atlantic cultural magazine Encounter, it was revealed that that pious journal had been secretly funded by the CIA. Despite having lied through their teeth that this was not so.

Spender’s theory was that the Americans, having made the revolutionary decision in 1776 to sever the ties between themselves and their cultural past, had great difficulty subsequently in applying any context to their creative works beyond the immediate, which led, in turn, to an obsession with the individual and the personal. A difficulty that America perpetually wrestles with to this day.

The evidence he brought to bear was the narrow, misanthropic verse of Walt Whitman, on the one hand, and, on the other, the procession of other American writers who left for Europe in search of their true cultural roots.

These thoughts came to me when I was confronted with my annual task (as unofficial, unelected secretary) to organise the small get-together of a few ruffians, rebels and recalcitrants who, by chance, attended the same high school between 1957 and 1961. Now, I don’t know what you think, but I reckon that those bare facts alone would be more useful in defining the sorts of people we are than to know that my DNA is 25 per cent French Huguenot, 25 per cent English, 25 per cent Welsh and 25 per cent Scottish.

Yet it is a comfort to know that when we meet, we have enough history in common to overcome any short-term differences over politics, whether we consider ourselves winners or losers, lifters or leaners or whatever is the latest wedge on the block to drive people apart. It is also comforting to know that, despite diabetes, failing eyesight, tumours and hip replacements, we are still there, more or less in one piece. So the habit of each year’s get-together proves to us that all is basically right in our world.

I hadn’t realised how important this annual get-together was until I thought about the coronavirus. Will any of us be out of quarantine? Will the venue still be open? Will our accommodation be still available? Will the trains, planes and automobiles still be running? Will I see some of them ever again? (If I might interpolate: just then, while writing this blog, I received a phone call from the daughter of one of our group to say that her father had just died. Sobering, isn’t it?)

For these are my own real roots, not the fantasies peddled by the ancestry industry. As it happens, the fellow whose death I was only now advised of gave me my first puppy when I was just 10, beginning a lifelong attachment (and broken hearts) to our canine companions.

Therefore, I don’t believe we can live happily and satisfactorily, unless we do have habits that bind us to our past and, hopefully, through the medium of others, children, close friends, those we admire, keep us in touch with a future that we helped to shape. Anything else, whether it be a product that seeks to capitalise on that sentiment or a gadfly notion ‘to live in the moment’, only serves, in my opinion, to diminish the richness of the human journey.

What comforts have you come to appreciate? What habits have you had to break during coronavirus?