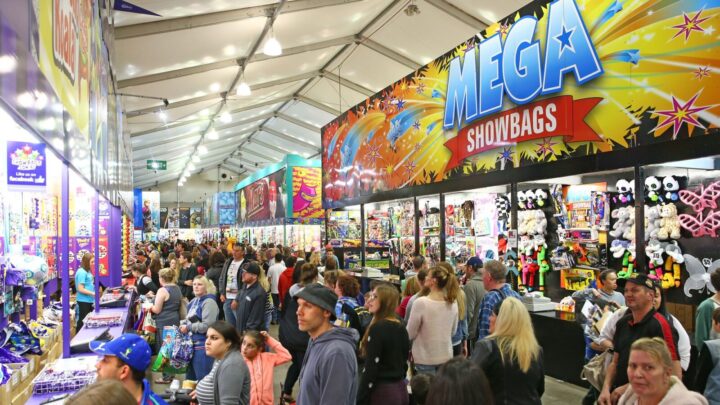 Australia’s love of showbags started nearly 150 years when the first showbag on record was a bag of coal given to visitors to Brisbane’s first EKKA in 1876. My Dad told me that later in the 1930s companies began to have sample bags at the agricultural shows in each state. These were given away for free or at a nominal cost to promote their products. It was only later that the bags were set up as a profitable items by themselves.

Dad knew a lot about shows and showbags. Between the late 1930s and the 1970s, he worked at many confectionary companies including Allen’s Sweets, Fyna Foods, James Chocolates, Lucky Boy Licorice, Giant Licorice, and Bluebell Confectionary. Dad would often fly interstate to set up the showbag stands for these companies, so he got to know many of the other showbag operators. This put my sister and me in a very enviable position.

We’d stroll around the showbag pavilion in either Melbourne or Brisbane and Dad would strike up a conversation with someone he knew on the stands. Inevitably we’d get introduced and a couple of showbags would get passed over the counter to us. By the end of the day, we were so burdened down we could barely walk back to the car.

The bags were made of paper and from memory, they seemed to be stuffed with more goodies than the limp, plastic bags of today. I do know that the hoarded bags once they got home lasted for several months tucked under our beds. Of course, there was the ritual discussion the following Monday at school where you compared the virtues of each bag with your mates.

The showbag stands of the 60s and 70s were elaborate. The Giant Licorice stand featured an enormous plywood sculpture of a man-made of licorice pieces. Today’s stands are less adventurous and consist of flat building panels decorated with stapled empty bags. They are also more generic with many stands selling the same bags. The old stands always had a magical hole in the wall behind the counter out of which emerged completed showbags stuffed with their goodies. I always imagined a mechanised production line marvel behind the wall assembling the bags. I was disappointed to discover one day when we were allowed to go behind the scenes that the marvel consisted of a pimply teenager or two stuffing comics and lollies into the bags.

Unlike today where the latest TV show or rap artist gets a bag named after them, most bags were proudly confectionary based. Chocolate bags, licorice bags, potato chip bags; with each brand celebrating their range. There was also an expectation of a toy such as a yo-yo or a pair of fake plastic glasses with a fake nose and moustache attached. Magic tricks or mini skill testers where you either had to get the tiny balls into the correct holes or shuffle plastic letters around a three-inch square puzzle were also popular. Part of the challenge of showbag selection was comparing the bonus contents of each bag and their confectionary quota as they were displayed on a board behind the counter. Of course, no decent showbag would be complete without a comic. Perhaps Superman for boys and Bunty for girls.

This brings me to one of my lifelong regrets. When I was about five, Dad was factory manager at the Lucky Boy Licorice factory in Caulfield, Melbourne, and we lived in a house on Inkerman Road behind the factory. Dad would often have to get up in the early hours to start the boiler for the day’s licorice cooking, so he had a hole knocked in the wall between the house garage and the factory to save him from traipsing around the main entrance on Hawthorn Road in his pyjamas.

Sometimes Dad took us into the factory on the weekend and I remember seeing the warehouse where the showbag goodies were stored. There was pallet upon pallet of Superman, Phantom, and Marvel comics. If only I’d had a few of each and kept them until the present day I’d be one of those get rich quick celebrities that you see on the news selling their prized comics at a Sotheby’s auction.

Being a bit of a nerd, one of my favourite showbags had nothing in it; well to start with anyway. Some government pavilions handed you an empty bag as you walked in and from then on it was a smorgasbord of free stuff from each section.

The Bureau of Meteorology, Department of Mines, and the Department of Defence were among the many represented. You walked up to the counter and depending on how zealous the public servants on duty were you either asked a nerdy question to feign interest or simply helped yourself to the goodies. Free rulers, pencils, scale cut out models of warships, bits of bauxite, and as many posters and booklets as you could stuff into the free bag.

Sadly, most of the old showbags we remember as kids have disappeared through changing economies and tastes. Some hung on for a while. The famous Bertie Beetle showbag which sold for only $2 for more than thirty years is still around in a slightly more expensive form, but bags such as Giant Licorice, Mastercraft Chocolate, Bluebell Honeycomb, and Sunnyboy bags are literally museum exhibits.

Also, with the “have it now” generation you don’t even need to go to the show to get a showbag as many are available online all year. In my mind, this takes out the thrill of the chase we used to get while winding our way through the overcrowded showbag pavilion hunting for our bags. But I guess that’s progress?