Next question? Morrison avoids queries related to the recovery of JobKeeper funds 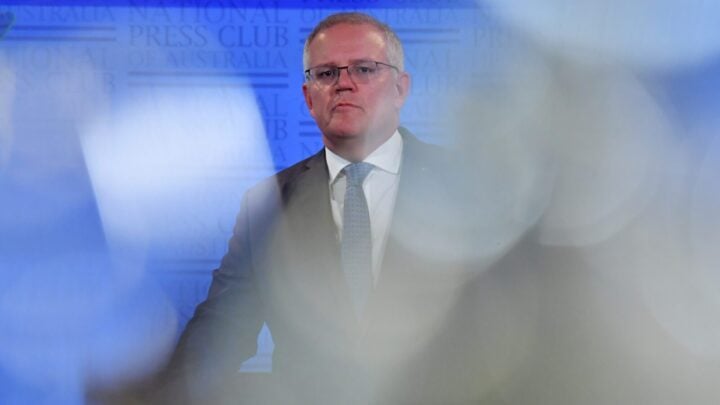 It’s hard to imagine, but I drew more encouragement this week from a spoof movie set in 17th century France than I did from watching the Australian Prime Minister Scott Morrison explain how a roll back of Government support for the Covid-19 pandemic would assist the recovery of our economy.

The movie — don’t ask me which — was one of a series based on The Three Musketeers by Alexandre Dumas and featured veritable princes of the spoof ‘genre’, Oliver Reed, Michael York and Richard Chamberlain. It’s hard to credit it in 2021, but the catchphrase of the Musketeers, “All for one and one for all”, seemed more likely to get us out of the fix we are in at this point in time, than what I heard from Canberra.

I knew Morrison would want to scale back government assistance; after all, for a political party that had almost had apoplexy over its opponents’ spending while in office, to then spend money themselves like it “grew on trees”, as my father would have said, would have stuck like a fishbone in their collective throats (pardon the mixed metaphor). I assumed that in an election year, Morrison would like to hammer JobSeeker (formerly Newstart Allowance) recipients, so as to appeal to that residual lump in the community that instinctively equates welfare recipience with ‘dole-bludging’, etc. So, that didn’t surprise me.

What got me thinking about the Musketeers was when one hapless reporter at the National Press Club asked Mr Morrison (a man who, he’d like us to believe, has a stern attitude towards the hand out mentality) whether he would be endeavouring to recover the millions (!) of dollars of JobKeeper payments that had been funnelled into the pockets of those who never needed it and for whom it was never intended.

Now, I’ve never met Mr Morrison; in fact, I’ve never seen him in the flesh, although I’m told that when a child he lived just around the corner from me in the Sydney suburb of Bronte, and that he wore his Bata animal footwear to Clovelly Public School where I knew a couple of teachers. Indeed, it’s possible he might have been the same kid who pushed me off my surfboard at Bronte Beach one day. (But I wouldn’t be so narky as to say that such an act of bullying a clearway on a wave for himself would fit perfectly with the trajectory of his subsequent evolution!)

Yet, he’s still made quite an impression on me as PM. Indeed, as I watched his performance at the National Press Club, especially how he twisted those self-styled hardheads from the Fourth Estate, around his fat little finger, I remarked to my wife: “This guy’s the world’s expert on how to give a non-answer to a question and get away with it. The press and the Opposition haven’t got a clue how to deal with him.”

That is what I found so startling when questioned about repayments for all the JobKeeper rorts and swifties that big chunks of the business community have allegedly pulled on the Australian taxpayer. Now, I use the term “allegedly” because as an old journo, I know that there is always someone out there who might be drawn into the dragnet and who can hammer me with a defamation action over a word out of turn.

Yet, Morrison wasn’t half so coy, as he accepted the essence of the question — that a gigantic fraud had been committed — as if it were established fact! Then, instead of the usual brilliant marketing hype, honed while head of Tourism Australia, he socked it straight back to the questioner, saying that to raise such a question was “playing politics” and that he would leave that to the “Opposition”.

You could hardly credit it. Here was one of the all-time great champions of fiscal rectitude saying that to bring welfare cheats (of a different stripe than normal) to account was “playing politics”! Do you know what? It worked. Because not a single follow-up question put him on the spot. No finger of hypocrisy was pointed. No scoff of “favouritism” was heard.

When it came to JobSeeker, we saw a different Morrison — here was the figure of fiscal rectitude rampant. He told us that no final decision regarding the ultimate value of the unemployment benefit would be made until the end of March when it would be assessed against the state of the economy.

Interesting! Because there is no limit to the anecdotal evidence that the abysmal rate of pre-Covid JobSeeker was linked to suicide, malnutrition, drug dependency, homelessness, shop-lifting, crime and so on, all matters that you’d think would bother a man of high moral standards. And certainly nothing to the effect of whether someone who failed to gain employment in a non-existent job, could actually live on JobSeeker without serious impact on their health and wellbeing.

But it was even more interesting than that. When this decision is eventually made, it will coincide with the end of the JobKeeper payment that, when administered honestly, kept many Australian businesses afloat which might have otherwise shut. Throw in the sharp reduction in dollars out in the community with the winding back of JobSeeker, and you have the ingredients for a perfect storm of economic bad news.

However, I admire the political instincts of our prime minister, because all that bad news won’t show up in the statistics until the next financial year, by which time the unemployed will have three months to endure the new, rock-bottom JobSeeker rate. To which, we can add the resurrection of RoboDebt, as a means of harassing them still further. Yet, somehow, I don’t expect RoboDebt will be put to work recovering the money defrauded from the Commonwealth by the abuse of the JobKeeper payment system at the Big End of Town. That would be “playing politics”.

I found myself wondering what Athos, Porthos, Aramis and D’Artagnon would have made of Morrison’s address. Not much, I suppose. Perhaps, I wondered, what would a more relevant figure than the swashbucklers of Old France have made of it. Like John Gorton, for example. Prime Minister from 1968 to 1971, he held to the quite revolutionary idea (for 2021, that is) that to be given the honour of governing Australia required you to have a vision for Australia and a determination to bring it about.

Having the slick ability to dodge bullets with fancy footwork and then set your opponents up as public enemies would, I reckon, fall short of any sort of vision he’d be proud to claim as his own. “All for one and one for all” (without the slashing sabres, of course) would be closer to his ethos. I’m sure of it.