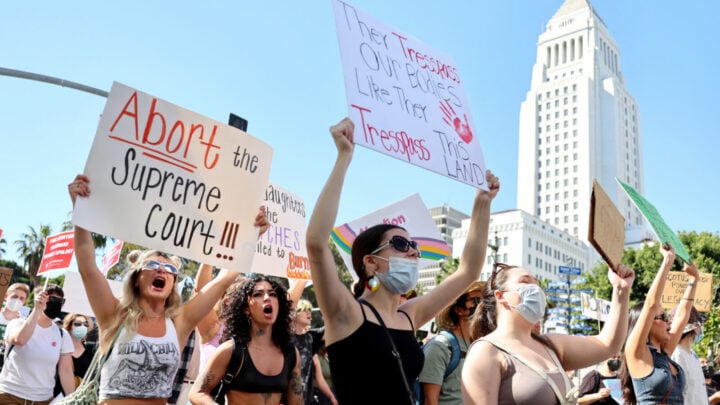 This blogger opens up about the overturning of Roe v. Wade. Source: Getty

*WARNING: This blog contains content that may be distressing to some.

We have made tremendous progress in the US concerning human rights. Things aren’t perfect, but at least there’s been some improvement over the years.

Finally, there’s been a shift in the US regarding inclusion, the right to free expression, and a tolerance toward varying types of lifestyles. This has been very exciting for me because I’ve had to live on the fringe for most of my life regarding certain choices I have made.

In recent years, I’ve felt fairly accepted as a gay woman, and that is such a relief. For years I’ve had to live in the closet, making me feel isolated, creating paranoia, and excluding me from many friends and family.

And now we are seeing the unravelling of certain fundamental rights being retracted for women in general. It’s quite frightening.

Recently came the reversal of Roe vs. Wade. Most women I know are incensed. Several are marching and writing letters. The erosion of our progress has many women up in arms making me wonder if The Handmaid’s Tale is a prophecy of what’s to come.

Hearing about this decision took me back several decades to my days in college at UCSB in California. I’m sure many women can relate to this as well.

College was a very free time for many of us. It was 1971, and sexual mores were very loose. I was questioning my sexuality, which was fairly common at that time. Free love was the slogan of the day, and drugs were rampant. Many of us functioned fairly well with all this latitude, but for some of us, there was a slippery slope and a double standard.

I remember being in many precarious situations, where it was just easier to go along with what my male partner wanted than it was to tell him that I’d changed my mind. I’m sure this happened to many women at that time.

Perhaps it was your boyfriend. You say “no.” He nods and continues. You say “no” again. And then it’s too late and you are left enduring the aftermath of an unwanted sexual encounter.

That’s bad enough, but what if it was your brother, father, or your uncle? What if it was a total stranger at a party, somebody at work, or something far worse?

Perhaps you felt shame or embarrassment. Maybe you confided in a friend or relative. Or perhaps you just suffered in silence, thinking it was your fault. Why were forced advances accepted and you had to shoulder the blame?

Is an unwanted advance considered rape? Where’s the dividing line? If they slap you? If you have bruises? If you have been called a derogatory name?

Afterwards, how many of us have wondered whether we were pregnant, only to be relieved when our periods finally came a few weeks later?

I’m sure most women have gone through this, getting in a little too deep in an amorous situation and having a change of heart. It’s often too difficult to deal with the repercussions of saying no. You just go along with something rather than protest and try and get away.

And now we have Roe vs. Wade, taking us back to the ‘50s, eroding the bodily freedoms women have earned. We colour our hair. We undergo cosmetic surgery. Why aren’t we allowed to decide on what goes on with our reproductive organs?

With the Roe vs. Wade reversal, what other rights will be taken away from women? Will I have to pretend that I am straight again and that my lovely wife is just a companion for me? Will our marriage be annulled? Will my right to vote be abolished, or my desire to get an education?

I shudder to think that certain things that I’ve taken for granted for decades are going to be pulled out from under me.

And that’s a scary thought.