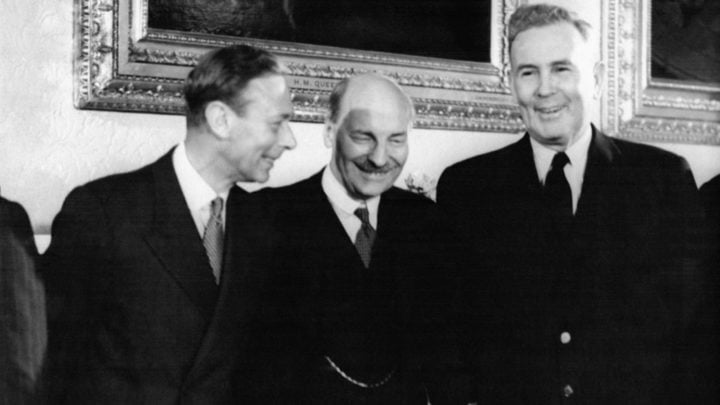 Rod looks to former Australian prime minister, Ben Chfiley, (right) and his handling of the post-war reconstruction of the economy as a way out of the coronavirus pandemic. Source: Getty Images

Books are things of rare beauty. They look impressive on the shelves, whether at home, in a library or in a bookstore but, obviously, they are more beautiful for what they epitomise, the growth and understanding of ourselves as complete human beings.

I have never valued my collection of books quite as I do now. With our local, well-resourced library closed for the foreseeable future, but with all the questions that life throws up ceaselessly buzzing around, I have had to turn to those yellowing pages for the answers that suddenly seem so necessary to be found.

While we have been watching the unfolding of the coronavirus pandemic and the world’s faltering response to it, we have been assailed with the usual doses of headline-grabbing hyperbole — “This is the gravest crisis in a century”, “This is the greatest challenge to Australia since 1942”, etc. — without the speaker explaining, respectfully (seeing they’re asking the United States to make the sacrifices), in what way does such talk mean anything.

Tucked away in a corner bookcase I found a densely written book acquired 50 years ago but which, in my inexperience, I had not appreciated for the light it shone on human endeavour in the direst of circumstances. It was the biography Ben Chifley written by LF (Finlay) Crisp (published 1960), a prodigious work inspired by his personal contact with the future prime minister while a public servant in Canberra.

(I met Crisp once, in 1966, when as professor of political science at ANU he peered, penetratingly, over his nose-perched glasses in demolishing my hope to do a higher degree in ‘Pol-Sci’ at ANU, informing me that a similar degree in the less sexy discipline of history would be more my speed.) Be that as it may, Crisp’s biography of ‘Chif’, all 422 pages of it, embodied enough detail and inquisitiveness to put to the test all the hyperbole about comparing our response to Covid-19 with the dark days of World War II.

The first, and most obvious parallel between governments of the 1940s and 2020s, is the demand placed on the country at both times to accept that this is a crisis affecting everyone, now and in the near future, and that anti-social behaviour, be it the profiteering from war-needed goods or the petulant congregating on public beaches, is out of order.

But Chif went a fair bit further than that. Right from his first budget as Australian treasurer, delivered in November 1941 on the eve of Pearl Harbour, he made plain his view that the burden of the war — and the country’s very existence, it soon became apparent — should not fall on future generations, by way of heavy loan raisings, which would eventually have to be repaid, nor on people who had already borne the worst of the Depression by severe war imposts on those least able to pay.

As far as Chif was concerned, the war should be financed ‘as it goes’ and that those who could afford to pay more should do so. Willingly.

Now, I don’t wish to make any comparison with the response of the current Morrison Government to the present pandemic because the structure of the Australian economy is so different from what it was in 1941. For a start, no brickbats intended, the potential revenue base to cover the cost of Covid-19 ‘as it goes’ has been so eroded — by asset-stripping, hidden unemployment, off-shoring of vital productive resources and on-shoring of cheap labour, plus irresponsible tax cuts — that we probably couldn’t do it if we tried.

Rather, what I do want to talk about is something I found unexpectedly in Crisp’s book that, I believe, is absolutely fundamental to a way out of our present predicament.

In December 1942, at the end of the worst year of the Pacific War and while the decisive battle for the Papuan bridgeheads (Buna, Gona and Sanananda) was still raging, prime minister John Curtin appointed his treasurer, Chifley, to take on the additional responsibility of a new portfolio, Post-War Reconstruction (PWR), to begin planning for a better world than the one that had imploded into world war.

Immediately, Chif spelled out his guiding belief, that in a better world, everyone should be entitled to the opportunity to participate to the best of their wishes and abilities. And, therefore, that the central plank in the PWR philosophy, the central thrust of all the great, consequential initiatives in nation-building and modernisation, like the Snowy Mountains Hydro Scheme, was the right of everyone to a job, so as to stand tall as self-confident individuals in their own right.

In this, I am not saying anything prescriptive about what a post-Covid-19 Australia should look like, but what I am saying is that if discussion and debate about Australia’s future can be undertaken in the darkest days of World War II, when victory was anything but assured, then surely we are capable of the same transparency today.

The suspension of Parliament until October would have been only the worst of several retrograde decisions; others deserving of public scrutiny should include why no worthwhile funds were ever directed towards finding a vaccine for the virus when its prior existence was known in the epidemiology community. This might lead to a long overdue discussion of the priorities we have allowed to creep into our public life over the past 30 years.

And need I go no further than the treatment of the unemployed and the homeless, whose circumstances make them seriously exposed to the virus. Or our government’s capitulation to the cowboys of ‘Wall Street’, after the global financial crisis, when even conservatives like Angela Merkel and Nikolas Sarkozy were urging the reintroduction of some regulation in world financial markets.

Sometimes, you just have to acknowledge that you got it wrong. My conservative mother, for instance, never one to embrace new ideas, still had a copy of official World War I historian Charles Bean’s War Aims of a Plain Australian (1944) on her bookshelves. If she could take seriously Ben Chifley’s call for public engagement with planning for post-war recovery, then so can we when the end of Covid-19 is nearly in sight.

(For the record, I think that Chif [who died 69 years ago today, June 13, 1951] was our best modern prime minister, because he treated ‘fairness’ as a realisable aim of public policy, not as a platitude to dress up speechifying. And the next best has to be John Gorton, who nearly managed to blend those Siamese twins of the Australian soul, security and aspiration, into the one persona. I never voted for either.)

Do you think there needs to be more open and honest communication coming from government/s on the reconstruction of the economy post-coronavirus?