‘The good old days: The things I learned growing up a farm kid’ 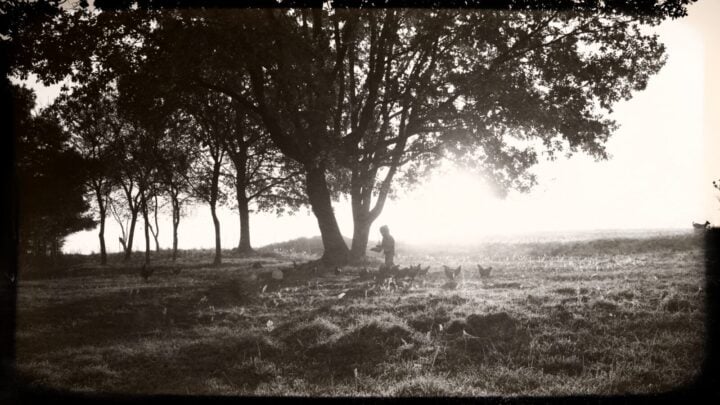 Claire Low writes about the lessons she learned growing up on a farm. Source: Stock Photo/Getty Images

It all started in the Port Lincoln Hospital on October 1, and because there maybe some mathematicians among you, I’m not going to tell you which year. After all, a woman needs some secrets. Being really good at arithmetic myself, I worked out Mum and Dad must have had a really good New Year’s Eve that particular year, if you know what I mean.

I grew up, the eldest of four children, on a farm at North Shields — a little place with one pub, one post office, one community hall, one school, two tennis courts and half a dozen houses, about 7 miles (11.3 kilometres) from Port Lincoln, South Australia.

My life was full of happy memories. Growing up on a farm in that era was idyllic. There were so many things to do that we rarely went to Mum to say, “We’re bored.”

Dad made us a toboggan one winter, so that we could slide down the grassy slopes. The farm always had plenty of trees, just begging us to build cubby houses in them, especially the Norfolk Island Pine, which was big when Mum was a girl. The branches of this tree were positioned in such a way that we could nail down the planks to make a level floor, and we could climb the branches like a spiral staircase, right up the whole 50 metres. We would cling to the trunk at the top while the wind made the tree sway drastically.

In the implement shed, were the three farm tractors we could pretend to drive. Each on us had our ‘own’ tractor. My brother Ian’s was the Fergie, my sister Heather’s the Fordson and mine was the Caterpillar D2, which was Pa’s tractor.

Actually, I was a bit of a Pa’s girl. When I was 3, Pa would take me out to help him feed the sheep. He’d put the old Vanguard ute in first gear, with a bit of choke, and get me to hang on to the steering wheel — standing on the seat, of course. He’d hop out, telling me to drive in a straight line, then jump on the back to put out the oats or hay to the sheep. I’d drive along in a nice straight line for such a long while, until I’d wonder if I could see Pa yet, then turn around for a look, still holding on to the steering wheel. When he was finished, we’d have a look at the ‘straight’ (debatable) line of sheep following the feed.

It wasn’t all fun, though. We had to work as well. My first job was looking after the chooks. The were definitely not chickens. They got to the stage where we had to put the axe into their yard to threaten them. Lay eggs or it is off with the head. By this stage, they were too old and tough to roast, so they had to be boiled — hence the name old boilers. If any one of you even thinks of mentioning my name in the same sentence as ‘old boiler’, be warned — I have a black belt in chop suey.

As I grew older, I was given the responsibility of keeping the wood box full. I had to gather pine cones and wood chips for starting the fire in the stove, then bigger logs to keep it going for hours. I even developed a jump chop to give the axe more force to split the logs. Winter was worse, because I had to keep enough wood for the fire in the dining room as well as the stove.

It wasn’t until years after I had left school, that I discovered we had been so poor that we hardly ever had any spare cash. No wonder I never got my wished-for horse for Christmas or birthdays. There was always a good reason, like, “You wouldn’t have time for tennis or dancing if you had to look after a horse.” I did like my tennis and old-style dancing.

I think it says a lot for parents who can make their children feel safe, loved and rich under these circumstances. They really were good old days!

Did you live a rural life growing up? What are some of your life lessons?