‘Food trends and traditions: From sausage mince to gourmet fare’ 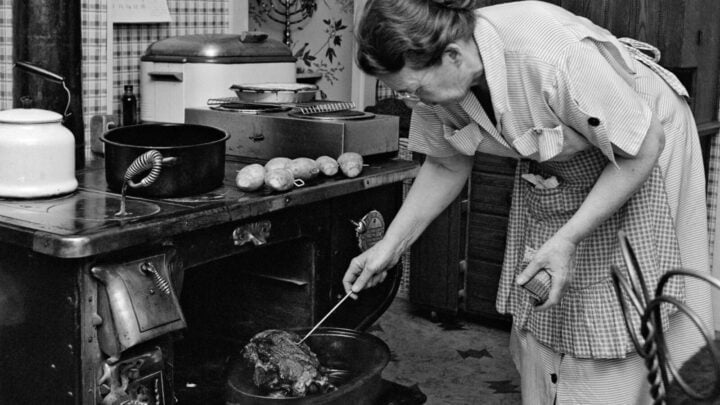 Gay recalls the food trends of the 1950s and '60s. Source: Getty Images

My dad was a fisherman and also delighted in removing destructive bunnies from the paddock. They also happened to be good on the dinner plate, so he wasn’t entirely being an eco-warrior.

We had roast bunny, stewed bunny, minced bunny and of course casseroled bunny. Mum and her sisters were bunny baking experts.

Even the dogs had their share. They’d sit in a row waiting for one each, fur and all. It was quite common to find little fur coats lying around.

The bakery cats we had lived on visiting rodents and a big bowl of milk. If Mum forgot the milk they went next door at milking time and the lovely lady squished milk into each eager little mouth.

The puddings we ate were heavy steamed puds, with custard regardless of the weather. Some, like boiled sago pudding (we called it ‘frog’s eyes’) would bring forth a “Yuck!” from children when it was served.

Preserved fruit sat in their jars for ages and was always a treat in winter. The ladies’ preserving technique was so good I reckon even the ancient Egyptians would have been impressed.

It was the days when men were given the lion’s share of everything. The lovely Sunday roast saw Mum and I get not much more than the fatty bits. Pretty typical really, but I still hate meat fat.

Young housewives in the 1950s were the queens of mince. We all shared recipes and I only had to walk into the butcher and sausage mince and hamburger was on the counter without my saying a word.

Occasionally visitors dropped in, totally mucking up the budget. It called for lots of vegetables and a sausage mince roast. I admit it was yummy. Spread it out flat, pile on stuffing, mix in boiled eggs, roll tight, roast until brown and crispy, serve with baked potatoes, vegetables and gravy. Even today I still love it.

I remember vividly the day I knew there just wasn’t enough extra to give the drop-ins. Everyone but me had battered slices of the Sunday roast; I had battered cauliflower that day. The children were sworn to silence.

When we occasionally go out for a meal in a restaurant these days, we’re served hardly enough to fit in one’s left tooth. It looks pretty, but we’d swing by McDonald’s for a top up on the way home.

The restaurant fare reminded me of my granddaughter’s wedding reception. She had a sort of degustation breakfast, with lots of little plates full of interesting treats that were quite different for me. It was a delight!

My grandchildren and great-grandchildren hardly know how lucky they are. They will plough through prawns and hummus and foods from so many different cultural cuisine, always asking for more. It’s so different to when I was a young girl, and then a young mum, trying to see how far we could make sausage mince stretch each week.

The meals I was eating during the ’50s and ’60s heavily reflected the Australian population at the time. It was a time to not only share in a meal, but to talk, laugh and solve the problems of the world. Times have certainly changed. Family meals today differ in many ways, but especially in the diversity of food being served.

What was mealtime like for you? Do you still sit around a table for a family meal?