‘Biden vs Trump: There are no winners when democracy loses all dignity’ 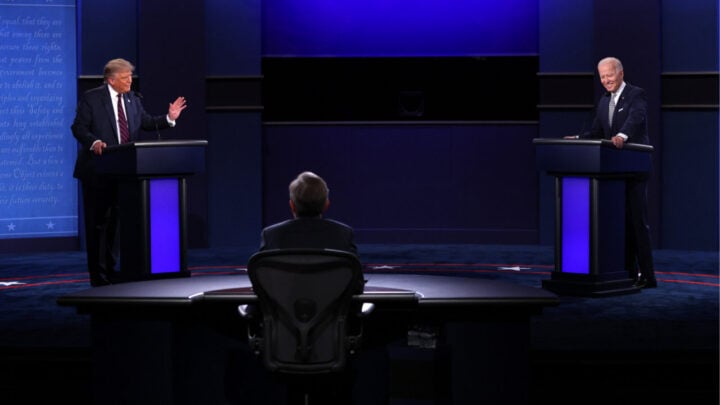 Trump and Biden went head to head in the first of three presidential debates on Tuesday. Source: Getty.

God almighty! How on earth could anyone make sense of the first candidates’ debate in the 2020 US Presidential election? Even the proverbial little green Man from Mars could be forgiven for asking, in mystification, I thought this was supposed to be a forum to decide who would be the most powerful person on earth.

Instead, we, the television audience, were subjected to a stream of consciousness of the worst imaginable kind, with the words “liar” and “clown” and “shut up” only the most audible in a slurry of abuse, interruptions, misinformation and shouting down that led the hapless moderator, Chris Wallace of Fox News, to throw up his hands in despair.

Millions, perhaps billions, had looked forward to this the first of three presidential debates in the hope that by shining light into the dark, chaotic corners of the past four years we might see a discernible path out of the nasty hiatus that seems to have frozen human endeavour since the election of Donald Trump.

We might then, perhaps, have been able to decide whether Trump’s 2016 election had been the circuit-breaker that a sclerotic world needed to re-energise once-vibrant centres of democracy and economic vigour. That all the angst and ill-feeling swirling around his presidency was almost entirely due to the mean-spirited reactions of those of the “left” to the anointment of someone beyond their comfort zone.

Or whether, instead, all the fatuous lying and boasting by Mr Trump signified the man’s essential unfitness to hold such a high public office – on which so many lives right across the world depend. Whether for help to improve things. Or at least not to make them worse.

At best, the structure of the debate was a brave attempt to provide the American people with some guide as to what they needed to know and understand before casting their votes on November 3. The venue was at a university campus in Cleveland, Ohio, a vital swing state whose outcome is often decisive in these titanic encounters.

Furthermore, the candidates were virtually restrained behind two lecterns, audience barracking was forbidden and each was restricted to a two-minute answer to the same question, followed by open “discussion” for the remainder of each of six 15-minute segments. Thus should have been avoided the circus that Donald Trump made of his debates against his 2016 opponent Hillary Clinton.

Then, it will be recalled, he tried to bring into the debate venue various women who claimed to have been sexually assaulted by her husband, former president Bill Clinton, and he was also allowed by weak-kneed moderators to wander around the stage pulling faces while Mrs Clinton was speaking, thus distracting attention from her – which, as anyone who has ever been on a television panel, on stage or on a television set knows, is the ultimate offence against media fair play.

The 2020 event looked good at the outset with the selection by Chris Wallace of the subject-matter areas to debate. The US supreme court, the Covid epidemic, the US economy, race issues and violence, climate change, the records of the respective candidates, culminating in what became an all-in brawl on the question of the integrity of the November 3 poll.

It was possibly a bridge too far in the current climate of opinion (aka mutual hatred) in the United States, because it was only when Trump’s response to Covid was on the table that the incumbent president was framed by the inadequacy of his on-the-record responses over the past nine months, to remain (almost) silent. Only on this issue did either candidate land a palpable punch, with Biden able to quote the fact of 205,000 US pandemic deaths, against Trump’s school-yard bleat that it would have been “two million under you”.

As for the other half-dozen issues, we were treated to a barrage of shouting and eye-rolling so that it was virtually impossible to get any perspective on the current state of the US campaign. About all you could say was that if Trump’s errant behaviour in the 2016 debates was an indication of the erratic presidency to come, then there is nothing that I saw to suggest the next four will be any different from the last, should he be re-elected.

And Joe Biden? You had to feel sorry for him, being subjected to tirades of abuse and shouting-down that often drove him to close his eyes in despair, particularly when the incumbent president persisted in referring to the drug addiction of the challenger’s son. (You get the picture now of what it was like?)

The only thing that surprised this observer was the irrefutable evidence that the United States has turned in on itself, that the ill-feeling at the heart of its body politic is so toxic that I am beginning to wonder how much longer we can expect the US to be a reliable partner in a region under increasing pressure from a rampant China. (This fact, to me, is underscored by the expedient quiescence of our great Asian neighbour in all those flashpoints which not so long back dominated our evening television news.)

Who won? Who lost? I don’t think that Biden did his cause any harm because the debate was his to lose. And I don’t think Trump’s needling did him any good because this is 2020, not 2016, and we cannot dismiss the behaviour at the previous debate as that of an adolescence which the experience of the Oval Office will force him to outgrow.

So, apart from the world as a whole, was there any loser on the night? Ordinary Americans might reasonably conclude that despite the odd rhetorical flourish or barb, their interests were still peripheral to the practice of mainstream American politics. But to me, the big loser was an idea, the idea of dignity in public life, with the 2020 debate only confirming the slide into the abyss that began in 2016.

When the first presidential debate was organised in 1960 between John F. Kennedy and Richard Nixon, it was a landmark event convened against a backdrop of the 1959 “payola” cash-for-songs scandal that trashed the reputations of the major US media conglomerates. Anxious to scrub up their image, the television company executives made it a condition of their offering free-to-air time for the debates, that they must be conducted in an atmosphere of “dignity”. What a joke that has become.

Did you watch the debate?