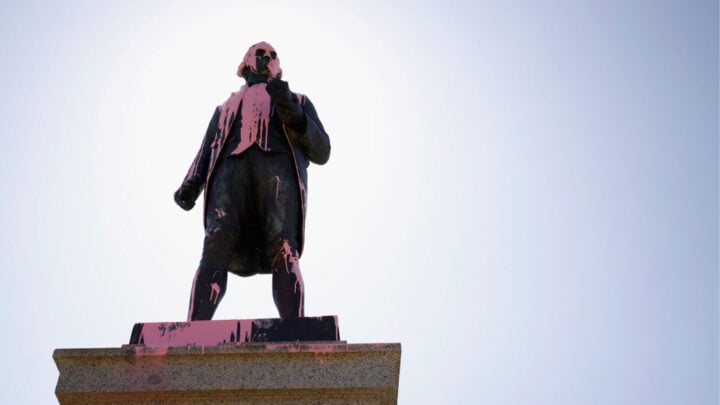 “In 1492, Columbus sailed the ocean blue. He had three ships and left from Spain …” This little bit of doggerel was one that many Western children grew up with, although most, especially here in the antipodes, had nothing whatsoever to do with the arrival of Europeans in the Americas. It was just part of accepted history at the time.

While that may be so, it is opportune for us to reflect on this event (it being October 12), especially as the whole Black Lives Matter contesting of accepted historical truths has inevitably reached our shores and, I believe, has a long way to go before it plays out fully.

It might surprise Australians to know that the importance of the Genoese Christopher Columbus in American history has never been a given. Opposition first came from nativist elements in the United States in the late 19th century who feared that to celebrate such an event might intensify the growing wave of emigration from catholic southern Europe. Much later, it became a focus of resentment among indigenous groups in both North and South America, appalled by their own subsequent dispossession at the hands of Europeans.

Consequently, the 500th anniversary of Columbus’s landing at Santa Domingo in the Caribbean, virtually passed without a whisper — despite the enormous and pervasive contribution of Italians to the US and, in fact, the entire world. In the popular realm alone, think no further than Frank Sinatra, Joe DiMaggio, Rocky Marciano, Stanley Tucci and Mario Lanza, and certainly never exclude the likes of Al Capone and the Corleone family.

So, if cultural and political powerhouses like the Italo-American community can live with the downplaying of a defining aspect of their presence, what does it say about the general question of history, especially when statues and other sensitive symbols are at issue.

I don’t know whether any statues of Columbus were pulled down or desecrated on October 12, 1992 but if they were, that would be sad, in my opinion, because it would not alter the fact that it happened while hardly de-legitimising the emigration of scores of millions of Europeans to the New World, much less obliterating the impact they made.

Similarly, to home in on symbols of a past which inadvertently or indirectly had an adverse effect on some people, would be a step too far. Thus, I can understand the dumping of the statue of slave trader Edward Colston into the Avon River, but, for the life of me, to smear statues of Winston Churchill and King George V is really stretching a very long bow. Almost to the point of relegating the honest study of history to the gibberish of propaganda.

Perhaps the smearers should ask themselves: Do you place no value on Churchill’s single-handed stand against Hitler and fascism, when most of his contemporaries were desperate to appease the monster? And that is the nub of what’s really at stake here.

Surely, any history is the legitimate history of all people, and while the bad things should never be accepted as a fait accompli, they should never be swept under the carpet, either. Yet, no-one in his right mind would suggest, for example, that the symbols of Nazism, which were erected all over Europe, should be endured in our public places because they are a significant part of “our” history whose existence should not be wished away.

Some symbols, whose appalling legacy in the present is inescapable, clearly have to go, as has happened in the American Deep South where the Confederate jack has finally been removed from all state flags of the old Confederacy. Yet it took more than 160 years after the slaves were freed for this to happen.

(Although, having travelled extensively through the rural areas of those states, I wonder whether we will see the same compliance, however grudging, in white-majority areas when demands are inevitably made to pull down those statues of North-facing Confederate soldiers that were erected after the Civil War, outside every county courthouse.)

And in Ireland, the statue of Queen Victoria, symbol of an 800-year English ascendancy, which stood outside Leinster House, the seat of the Irish parliament, was quietly removed in 1948 and spirited away to a Dublin warehouse. Until it was acquired, 40 years later, by the developers of Sydney’s Queen Victoria Building, where it now stands, gazing imperiously on the descendants of her Irish-Australian subjects!

But what about those symbols that mean something powerful to both their supporters and their detractors? What should happen to them? Let me offer for consideration, two different responses to rather similar situations on our own shores.

In 1910, General Lord Kitchener visited Australia and, while here, unveiled a war memorial in Bathurst, New South Wales, to the Australian fallen in the recent South African War. Tactfully, the architects left off the name of Peter Handcock, who was executed (along with ‘Breaker’ Morant), allegedly on Kitchener’s orders, for murdering prisoners of war. Fifty years later, a small plaque inscribed with Handcock’s name was bolted to the memorial.

In 1920, a monument was erected at Fremantle, Western Australia, to honour the explorers of what was originally called the Swan River Colony. In 1994, rather than agitating for the removal of that statue or desecrating it (despite having legitimate grounds for complaining about who really “discovered” WA), local indigenous Australians erected a “counter-memorial” instead.

Let us then consider the case of James Cook. Statues in our public parks plus the wholesale removal of his family cottage from Yorkshire to Fitzroy Gardens in Melbourne, celebrate his “discovery” of Australia. Indigenous Australians rightly say he did not “discover” the east coast of Australia (and he certainly did not beat William Dampier and Willem Jansz to the west coast). But, to the Eurocentric minds he grew up among, he did “discover” Australia.

And that, for better or worse, was the starting gun for a process that made Australia what it is today. Yet, are not those who identify personally with European settlement as entitled to a claim on the evolving spirit of this land, as much as Indigenous Australians are deserving of the recognition of their presence long before 1770? Are not the two visions complementary and therefore deserving of symbols of our shared nationhood?

So, why not leave poor old Cookie where he is and, instead, erect a second statue right alongside him, say, of a group of Aboriginals standing on the shoreline, waving their spears boldly, and telling him to “bugger off”. What could be more genuinely Australian than that?

What's your stance on this issue?