‘Cesspit of conspiracy: Why can’t today’s youth see the wood for the trees?’ 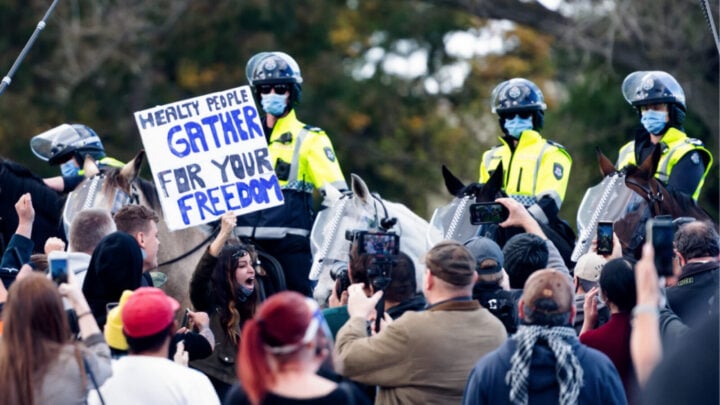 Retirement is a concept I have never felt comfortable with. Because I’ve always been preoccupied with one project or another, the idea of suddenly having an open-ended slab of time to fill between now and Nirvana, seems rather foreign to me. Casting a line, I like, but fish-gut on my fingers every day of my life?

I do remember once being asked how I imagine retirement would look like and I replied with a shrug, because the best I could come up with was to be sitting at an outdoor café table, with a warm flat white, idly flicking through that day’s paper. Of course, the café would have to be the Deux Maggots in Paris and the paper a “respectable” broadsheet. Like the international edition of the New York Herald Tribune (if it still exists). Fantasy, fantasy.

This morning, however, something like that happened. I must have been utterly fagged out because I was persuaded to bask in the sun on the veranda of my local bookshop, warm flat white proficiently made by Adrienne, with a delicate fir-pattern on the crema, when I opened the Weekend Edition of the Sydney Morning Herald, my old stamping ground.

I thought the front-page news looked quite promising, with the Commonwealth and the states more or less agreeing on a Christmas end to the Covid-19 lockdowns and border closures – by trying to find some common ground between those impulses pulling us in wildly divergent directions, of keeping us alive while keeping us reasonably flush.

Yet, basking in my mini-retirement seemed to last only five pages before page six revealed the alarming words of security experts from Deakin University, that the response to the pandemic had led to an explosion of conspiracy theories on social media. The most common themes among those on the disaffected fringes are that the pandemic is a sinister Chinese intrigue or a hoax (800,000 deaths is a pretty fair hoax, you’d have to admit).

Or that the official response to it is part of a plot, probably orchestrated by the World Health Organization, to impose some kind of world government on us. (Despite the mild-mannered Daniel Andrews looking the least likely Dr Fu Manchu I’ve ever seen!)

It was all rather depressing. And rather foreign, because by and large, it is not our age cohort that refuses to look at the objective facts of a global pandemic, while preferring, instead, to swallow untested, usually bizarre, theories without a shred of hard evidence. And hold those convictions, in the face of any logic, with the intensity of a blind, blood-thirsty theologian of the Thirty Years’ War.

But why, I wondered, is it that we, in our sixties and seventies and older, can see the wood through all the trees and can rationally assess the utility of any program to contain the pandemic’s spread, while a growing number of those in younger age groups cannot?

Up to this morning, I would have put it down to selfishness, especially among those younger people baiting the police about social distancing on some of our beaches. So, were some of my more cantankerous fellow septuagenarians right, I asked, in saying the young have had it too good, so good that when things inevitably get tougher, they can’t cut it? Perhaps.

But as I began this blog, I could hear Number One son telling his mother that there had been arrests in Melbourne demos held to protest any continued pandemic lockdowns –  that seemed much more politically focused than sporadic jeering at the lads and lassies in blue.

I thought about what makes the experience of those in our age cohort different from those thirty or forty years younger so that we are far less likely to object to the social necessities required to bring a world-wide killer under control. A few things came to mind.

We grew up in the aftermath of World War 2, a conflict that took six long years of determination and sacrifice. It was tough at the start and there were always appeasers in our ranks but they were roundly reviled by the overwhelming majority of the population. Because the lesson learned by our parents was that you hang in and see it through, no matter how tough the going, if the goal – your own freedom, no less – is worth the fight.

We learned that lesson at our parents’ knees but when it came the turn of our children and grandchildren to seek some guidance from us, what were we able to pass on that would be useful when an unexpected enemy, and an invisible one, seemed to turn the whole world upside down?

Others might point to the globalisation of our way of life, driving great wedges between people in a climate of rewards for those who ”win” and penury for those who “lose”. Thus inculcating great selfishness in many of our young and disregard for the victims – who obviously brought their “failure” upon themselves. (Where that leaves the poor old folks in aged care, I hesitate to ask.)

Both of these theories have merit, up to a point. And I believe that point is where your native wit and compassion and reason enable you to transcend your own situation and reach a conclusion unfettered by self-interest. Look at St Francis of Assisi; he was hardly a “winner” in the modern sense, but I have no doubt what he would say about the proper response to the pandemic.

I believe we can all reach a rational response to the hardest of tasks without plunging into the cesspit of conspiracy theories or throwing the old folks to the dogs, merely to indulge our own self-centredness. But it requires our society to equip us with the tools to do so.

As I grew up, my education told me that the key to clear thinking was to develop the analytical skills necessary to argue your case and then defend it if you think you’re right, or change your mind, if it is revealed that you are wrong. No big deal in that, because that was the point of all those English and history and economics and politics essays and examinations where you had to put your ideas down on paper and convince the examiner that your argument was sound.

Ticking a box to be processed by an algorithm hardly seems a useful way to develop a rational mind. The rise and rise of the irrational when faced with the most dangerous enemy in 80 years is a ringing endorsement of that short-sightedness. And now we want to financially punish those few among the young who do wish to pursue studies that develop  the rational thought that we in our generation understood as essential. So, they’re not “job-ready”, eh? Rubbish! What on earth are we doing to ourselves, I ask instead?

What do you think of the protests?