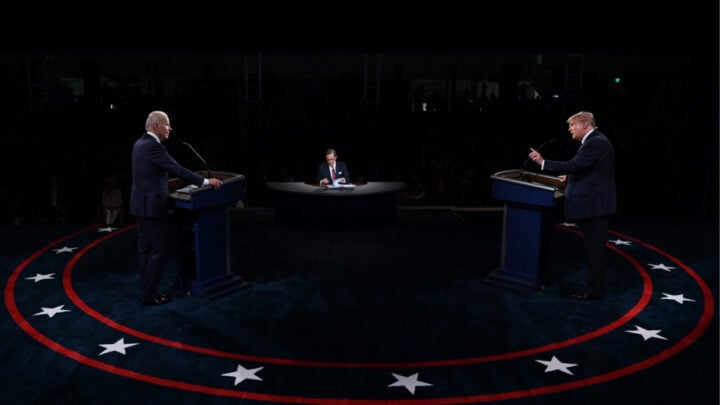 Rod turns his eye to the US election and the battle between Trump and Biden. Source: Getty

In a week’s time, we’ll know who will be the President of the United States for the next four years. And I, for one, am unequivocal in hoping that it won’t be Donald J. Trump. Sure, I might be able to tolerate more lies, distortions and abusive twitter feeds by simply switching off the tellie, but I’m not sure the world is ready to take much more of him.

Let us establish one salient fact: I was never a Trump hater when he first appeared as a prospective presidential candidate, way back in 2016. In fact, almost the reverse. While I had no illusions about his dodgy record – and his gross vulgarity was there for all to see – I thought the US had wallowed so low in the excesses of the free market, that a sharp corrective was inevitable. Indeed, essential.

And as I watched the unfolding 2016 presidential campaign, I saw that I was in pretty good company, particularly when African-Americans were interviewed by Australian television journalists, about their likely voting intentions. Not only did some indicate that they were sick of being taken for granted by the Democrats, they actually wanted the system to deliver them real jobs they could depend on.

Even more significant was the attitude of those of their workmates who still intended to vote Democrat – they understood perfectly why an African-American who had got nothing out of the political system might prefer to vote for Trump.

I remember saying to an American neighbour who was a rusted-on Hillary Clinton supporter, “Yes, I understand that Trump is a spiv, but he can’t raise the sorts of expectations he has among the jobless in the American rust belt and then ignore them.”

Was I wrong! Because that’s exactly what he did. Even at the most base level, he didn’t “lock her up” and he didn’t “build that wall”. Despite all the ugly chanting to that effect.

It appears that those who are sticking to Trump do so for cultural reasons, more from loathing the small-L liberal, Manhattan-California-Martha’s Vineyard “beautiful people” than for any innate belief that Trump will change their lives for the better. That’s a fragile foundation on which to build a re-election campaign and as Covid-19 pitilessly destroys the US economy, jobs and families, so small but significant elements in the 2016 Trump coalition are drifting away from him.

By balance, I mean a softening of the hard edges of an economic culture that writes off millions of decent, law-abiding citizens as “losers” or “leaners” or “deplorables” because they don’t fit into some new, narrow paradigm of “success”.

And should anyone doubt me, I suggest they delve into Michael Moore’s Capitalism: A Love Story and search for the sequence about Barak Obama’s visit to Flint, Michigan, to address the issue of poisoned drinking-water in that city. It is a chilling indictment of an administration elected on the slogan of “Yes, We can”. As though “We” meant everyone.

However, all this would be relatively academic, a problem for 330 million Americans to work out for themselves; but for the fact that Trump’s forays into international politics have heightened tensions to the point where the pundits are nervously watching for the first spark that ignites a tinder box.

Yet no country is more exposed than Australia to the erratic foreign policy of the current US president. Always dependent, as we are, on support from allies across the other side of the globe, this time we are right in the middle of a barney as potentially bad as the 1962 Cuban missile crisis. Here we sit, on the fault line between two superpowers, neither of which can sensibly predict what the other might do. That is, whether they are merely bluffing or they actually mean business. With all the dire possibilities of miscalculation.

How can small countries like Australia, in an exposed geographic and trading position, plan for that? Because there is always the Kurdish example to keep in mind – having been Trump’s most loyal and compliant of allies in the Middle East before he decided to move on to greener pastures, whereupon he stabbed them in the back.

Which leaves us with Joe Biden. While there is little doubt that his election would prompt a huge international gasp of relief that we can lurch back from the brink of war, will the world be a better place by his election – in the medium to long term? I’m not so sure. The eight years of the Obama administration, in which Biden himself was at the very heart, was one of subservience to the international reach and influence of Wall Street. And the logic of Wall Street’s outlook is always the same: find the most cost-effective solution to any problem.

That outlook, when visible in every crisis over the past 30 years, did not give us the progress and security we crave but delivered us, instead, into the arms of Trump and China. And I can’t really see that the election of Biden in 2020 will bring us any closer to the “people-effective” policies which might mitigate the gnawing anxiety that has been part and parcel of our lives since the 1980s.

What particularly worries me is that the mental laziness I see right across the Western world, will re-emerge after the election of Biden and we will be back exactly where we were before the advent of Trump – between the devil and the deep blue sea. Between living on the smell of an oily rag or becoming a client state of the head-kickers of Hong Kong.

Already, the real estate ‘industry’, for want of a better word, is bleating to allow Chinese cash back in to start buying up over-priced Australian assets once again. Assets that we, the citizens, can no longer afford to buy ourselves. So, who would put money on any Australian government having the guts to withstand that kind of pressure when a revitalised Wall Street-Beijing accord is schmoozing that everything in the garden is rosy again?

And what of the rest of us, the ordinary Aussies, with so much at stake and so little influence? Do we chew our fingernails and pray for a miracle? Or several of them? Or do we take a leaf out of our parents’ book when faced with similar black clouds of uncertainty 80 years ago, and hold our nerve? Hmm.

Who do you hope wins the election?