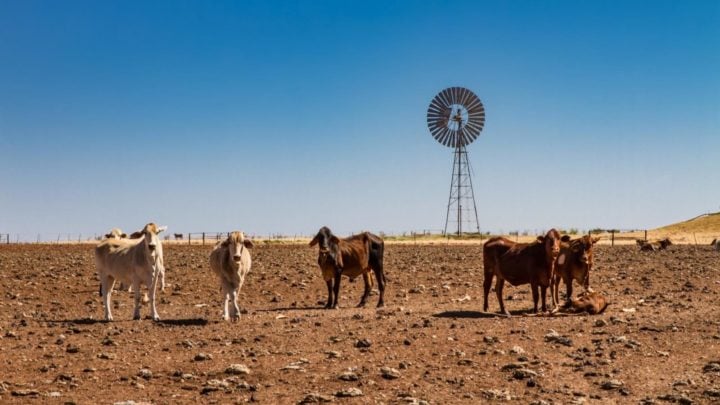 Cattle in remote areas of Australia in areas affected by drought. There is limited or no vegetation cover and the area is exceedingly dry. Source: Getty Images

Grace is a country girl through and through. She knows what it is like to waken to the lowing of cattle, to hear the stirrings of birds in the river gums, the sickening rustle of a brown snake among the dead leaves on the back porch. She knows what it’s like to be lampooned by city acquaintances about being a country bumpkin, out there with the dew on the pumpkin. But even she had to admit that what we saw on Thunderbolt’s Way recently was a first for her.

Drought is no stranger to Grace. After all, the infamous drought of the middle-’60s had driven her father off the land at Scone. And, during the subsequent years on their wheat and cattle property west of Tamworth, New South Wales, anxious eyes were always turned towards the vast empty purple of the horizon.

This time, however, she said it was different. Because the reason why our trip to Inverell took twice as long as usual were the thousands of sheep and cattle on the road. All of them being driven along either side of the bitumen to scour the verges for what scanty grass still survived, virtually the only flush of green in a hundred kilometres of brown earth.

This wasn’t the first time we had encountered livestock on the roads up here in the Northern Tablelands. This is grazing country and so it can be a reasonably common driving hazard when stock are moved between two or three non-adjoining properties.

What was different this time, and what astonished Grace, was that the drovers were setting up camp beside the road, hauling caravans or pitching tents in among their stock, with dogs on guard against predators. They were clearly on the kind of long distance operation, far from home base, that only the desperate undertake. To a city boy like me it would be like strapping your most valuable asset – the family home — onto your back and taking it with you to work to ensure it had not been burned down or repossessed during your eight-hour sojourn.

On reflection, I think that being confronted by the lives of others, people rather like herself, who were so obviously on the edge quite threw Grace, who has the stoic immutability of the inland deep in the marrow of her bones. When we eventually reached Inverell, having also passed through the scorched remains of recent bush fires (which, as television voyeurs, we had already forgotten), she was much more unsettled about country living then I had ever seen her.

The most confronting thing she saw was that the rural poverty we know to be a fact, was no longer invisible, hidden beneath an impervious layer of commercial boosterism and the shame of the have-nots in living cheek-by-jowl alongside the have-plentys. These are sorts of things we became used to when living in declining regional towns, such as the really poor shopping in supermarkets in the dead of night when the rest of us are tucking into our evening meals.

As it happens, Grace and I spent much of last year working for a program that aimed to provide the homeless with filling, nourishing hot meals. It was a shocking experience, not only to find how rough many people were sleeping — under bridges in the searing cold and in empty lift wells — but how mean were so many who could have dipped their hand a little deeper into their pockets to provide sustenance to those in serious trouble.

In the end, the program actually folded because of a collapse in financial support, and I suppose that the unkindest cut, as they say, were the parting words of one of the convenors who suggested that perhaps those of us who gave up our time to cook and distribute the food might like to fund the purchasing of it as well! What the hell could you say to that!

That’s the thing about drought — it brings everything out into the open, and all the apparent social need for pretence and obfuscation vanishes. The poor and the devastated were out there in force in the streets of Inverell, shuffling about, making do, killing time. Last week. Today. Next week. Their plight undeniable, for everyone with eyes to see.

Except, apparently, to those who might be in a position to do something about it. Because it is a sad fact that the decline of regional Australia and the grinding poverty that goes with it, seems not to have stirred so much as a dust mote during the recent federal election campaign. It is not just the politicians who’ve dropped the ball: It is a shameful fact that the toxic state of regional Australia features so little on the radar of the nation as a whole. Not much more than a 60-second grab about torrential rain or water restrictions or some argy-bargy about the latest small party challenging the Nationals’ fiefdom.

Ultimately, I sheet home the blame for much of this myopia to — cue drum roll — the heartless influence of Mrs Thatcher, which shows little sign of abating after 30 years. Actually, I wish she was still around today because I’d like to ask her: ‘Madam, when you opined that “There is no such thing as society”, did you mean that the parable of the Good Samaritan, part of the bedrock upon which our Western values supposedly rest, had nothing to do with offering a helping hand, but was, rather, a commercial transaction in which someone special wins and the rest inevitably, and deservedly, hit the canvas?’ I wonder what she’d say?

What are your thoughts on this issue? Are there other concerns that you feel were overlooked during the recent Australian federal election?