The Bra Whisperer: Things you should never put in your brassiere 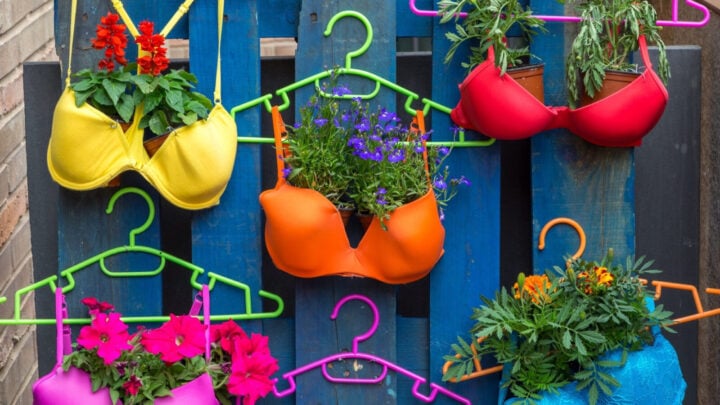 Women are known to store their bits and bobs in their bras - but experts say there are a few things you should avoid. Source: Getty

As women, we juggle not only tasks but also belongings — often carting around half our husband’s possessions within the deep confines of our handbags. But should we find ourselves sans handbag, we often turn to our faithful old bra to carry our bits and bobs.

Bras have been the go-to pocket for years, with women using them to keep important possessions away from pickpockets or to hold their lippie and spare cash for easy access.

But while bras may seem like a handy spot, Esther Labi, founder and “bra whisperer” of Storm in a D Cup, has revealed that there’s a few items we should never store in our little ‘lady pockets’.

“You would think the handbag industry was crumbling with the amount of women I see every day with the entire contents of their wallet — or the wallet itself, no joke — stuffed in their bra,” she said. “However, I am here to be the bearer of bad news and tell you that your bra is absolutely not the place to store your things. When you put things in your bra, you are not only risking damaging your bra but your breasts as well.”

According to Labi, car keys — or anything else sharp — can easily damage the bra that is holding them in place or even your breasts! We all know bras aren’t cheap, so Labi says it’s best to avoid damaging the delicate fabric by holding items such as keys in your bra.

“I have seen the aftermath of what a set of car keys can do to a bra, and it’s not pretty,” she said. “Their odd shape can actually leave lumpy or wrinkly grooves in your bra’s cup and/or padding. This means that next time you wear your favourite bra, it may gape or your breasts may not sit smoothly in the cup.

“Even worse, car keys – and anything else sharp – can actually pierce through the cup and leave you with an incredibly unflattering hole in the front of your bra.”

With the pandemic still getting around, this one should be a bit of a no-brainer. Tissues, once used, are for the bin and definitely not for bras, and this goes for the old handkerchief as well.

“In today’s day and age, keeping up with our hygiene is critical for stopping the spread of disease,” said Labi. “So while we are taking extra precautions to wash our hands regularly, elbow bump instead of shaking hands, and wear a mask if we’re feeling unwell, why on earth would we store a used tissue in our bra?

“By putting a dirty tissue in your bra, you are converting it into a petri dish for incubating and spreading highly transmissible viruses. The warm, dark world inside your bra offers the conditions to promote the growth of nasties — so just throw your tissue in the bin.”

While a bra may seem like a perfect place to hold your make-up when you’re without your handbag, the melted mess you could leave behind, not to mention the cost of replacing your make-up, is just not worth it. In Labi’s words, “For the love of lipstick, keep it out of your bra.”

“We have all left our favourite lipstick in the car on a 30-degree day, or right under the window as the midday rays flow in, and found it in a melted mess hours later,” she said. “However, what most women have only done once, and learnt the hard way, is that keeping your lipstick in your bra can do the exact same thing. Trust me, you will regret that convenient storage spot next time you go to touch up.”

Your bra is designed to carry one thing (well, two things), and adding extra weight will not only wear out the elastic on your bra sooner but also add additional pressure to your back and neck according to Labi.

“Coins, wallets, phones and sunglasses all act as anchors in your bra, pulling with gravity to weigh your breasts down,” she said. “Putting anything heavy in your bra with reverse all reasons we wear a supportive bra in the first place.

“The right bra actively prevents some chronic physical symptoms, as it supports your breasts and shoulders. Especially if you’re a woman with a bigger bust — like our Storm in a D Cup community — wearing a bra can prevent neck and back problems and you don’t want to add any extra weight to your bra.”

Space to carry may mean you’re wearing the wrong size

Labi says it’s important to remember that if you can fit something in the cup of your bra, you’re probably wearing the wrong size. The “bra whisperer” recommends all women get fitted by an expert regularly, as women’s bodies change shape throughout their lives.

Are you guilty of holding these possessions in your bra?