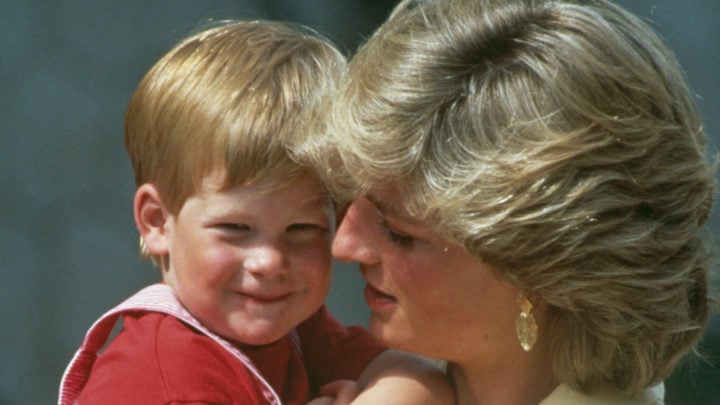 Prince Harry opened up about the lasting pain his mother's death has caused. Source: Getty.

Prince Harry was just 12-years old when his mother Princess Diana was tragically killed in a traffic accident in Paris in 1997, and the world looked on in sorrow as the young prince walked behind his mother’s coffin, alongside his brother Prince William, at her televised funeral.

Now, 22-years on from the tragedy, the Duke of Sussex has opened up on the “festering wound” caused by the loss of his mother, as well as revealing his ongoing fears for wife Meghan.

Footage has been shared of what is perhaps Harry’s most honest interview to date, ahead of upcoming documentary Harry & Meghan: An African Journey, which is set to air in the UK this weekend. The clip, which features in the trailer for the one-off show, shows the duke speaking on camera to ITV journalist Tom Bradby.

And as the 35-year-old royal discusses the impact of his mother’s death, Harry can be seen getting visibly emotional, before revealing what he considers to be the “worst reminder” of his mother’s life, as well as how he feels about continuing her legacy.

“So in that respect it’s the worst reminder of her life, as opposed to the best. Being here now 22-years later, trying to finish what she started, will be incredibly emotional.

“Everything that I do reminds me of her. But with the role, with the job and the pressures that come with that, I get reminded of the bad stuff unfortunately.”

Bradby goes on to discuss Harry’s fears that the Duchess of Sussex is now being subject to the “same pressures as his mother was” and the trailer ends with a glimpse of the reporter standing face to face with Meghan as she prepares to give her first solo interview on camera since joining the royal family officially in 2018.

Earlier this week, royal fans were delighted when another clip from the documentary was shared online which showed doting mum Meghan sweetly caressing baby Archie Harrison’s face as the family of three met with Archbishop Desmond Tutu.

The 20-second trailer showed flashes of the couple’s most recent royal tour from their joint engagements in South Africa to Harry’s solo engagements and the precious time they were able to spend with their son. But it was Meghan’s maternal side that attracted the most attention as fans were quick to comment on a sweet moment in the video, where she can be seen stroking her young son’s head before planting a gentle kiss on his forehead.

While it only lasts a few seconds, viewers can see Harry holding his son proudly as the duchess leans in and cups his head gently in her hands to soothe him, before planting a kiss on his head as Harry whispers to his wife: “Let’s go.”

Hundreds of royal fans have commented on the tender moment between mother and son on social media, with one person tweeting: “This baby was so wanted. They wasted no time in starting their family, and their love for Archie just pours out of them in photos and videos. You can’t fake that. This family is so real and it shows.”

Another said: “They are so in love and Archie is made of love, awesome.” While another commented: “Can tell this baby is so loved, look at how happy he is. Both parents are very protective of him.”

What do you think of Prince Harry's interview? Would you like to watch this documentary?