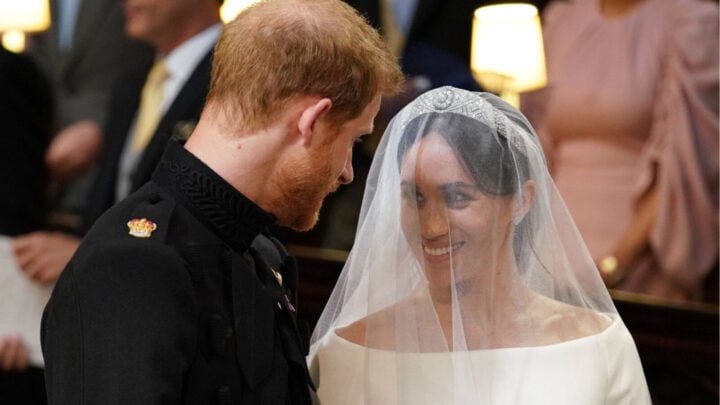 The Duke and Duchess of Sussex tied the knot in May 2018 at Windsor Castle. Source: Getty.

Millions of people around the world watched with baited breath in May 2018, as Prince Harry finally got his happy ending and tied the knot with former US actress Meghan Markle, now the Duchess of Sussex.

But now, more than two years after their special day – and following the birth of their first child Archie Harrison Mountbatten-Windsor – new details have emerged about the royal wedding. The sweet new titbits were published in new biography ‘Finding Freedom’, which was published in the United States this week.

While their wedding was broadcast live on television around the world, the Duke and Duchess of Sussex were very secretive about their evening reception. However we now know that they had their first dance as a married couple to 1968 hit ‘I’m In Love’ by Wilson Pickett, according to Hello! magazine.

The book, which will be released globally this month, is written by royal reporters Omid Scobie and Carolyn Durand and is said to be be based on their “own experiences as members of the royal press corps”. However Meghan and Harry themselves have not contributed to the biography.

Many details have now emerged from the book, which has been serialised by The Times and Sunday Times in the UK, and People magazine in the US, including what really happened on the duke and duchess’ first date – after they were set up by a mutual friend back in 2016.

“Over drinks (beer for him, a martini for her), they asked each other questions about their work,” Scobie and Durand write, describing the couple’s blind date at the swanky London venue Soho House. The book continues: “At the end of the evening, which had lasted almost three hours, Harry and Meghan went their separate ways. Despite the palpable attraction between them, there was no goodbye kiss, no expectation, just a hint that something was there and they hoped to see each other again soon.

“No one expected what happened next. ‘Almost immediately they were almost obsessed with each other,’ a friend said. ‘It was as if Harry was in a trance.’” Meghan called one of her girlfriends. ‘Do I sound crazy when I say this could have legs?’ she asked.”

However the biography has also made some more shocking claims, including that Prince William reportedly told Harry to “take as much time as you need to get to know this girl”, with the authors claiming that Harry perceived his brother’s choice of words as snobbish and condescending. The biography also alleges that Meghan was referred to as “Harry’s showgirl” by a senior-ranking royal, and that another family member told an aide: “She comes with a lot of baggage.”

Which song did you dance to at your own wedding?