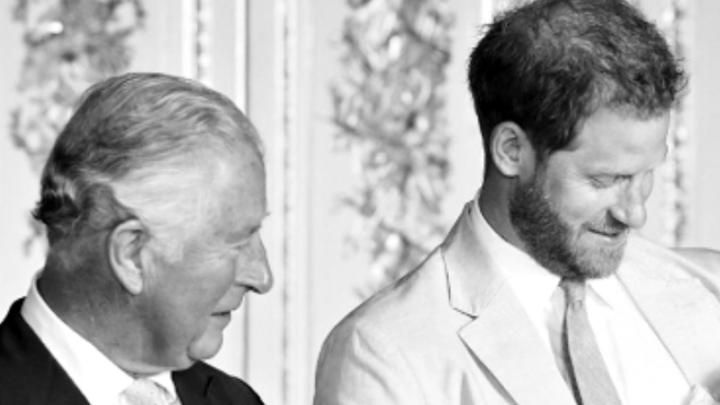 The Duke and Duchess of Sussex led the tributes to Prince Charles on the occasion of his 71st birthday yesterday. Source: Instagram/Sussex Royal.

Prince Charles celebrated his 71st birthday on Thursday and to mark the occasion senior members of the British royal family released sweet images of the heir-to-the-throne throughout his life.

The personal birthday tributes ranged from photographs of the Prince of Wales as a child to recent images of him with his two grown-up sons, but it was the sweet image shared by the Duke and Duchess of Sussex that garnered the most attention from royal fans as they released a never-before-seen snap from their six-month-old son’s christening earlier this year.

The touching message was posted alongside the black and white photo with showed Prince Charles beaming with pride as he stood alongside his son Prince Harry who can be seen cradling his young son Archie Harrison Mountbatten-Windsor, who was then just two months old.

The photograph was taken by royal photographer Chris Allerton at Archie’s christening service in July. It has never been shared publicly until now, with Harry and Meghan famously keeping much of the details from the day private, having previously only released a handful of official images to the public.

Fans were quick to comment on the family photo, with one person writing: “Ommmmmggggg!!!!! Such a beautiful picture, Prince Charles looks so proud. [sic]” Another commented: “Beautiful photo of 3 generations… Happy Birthday your Royal Highness.”

While a third said: “What an absolutely wonderful photo of grandfather, father and son.”

Other members of the royal family shared their own tributes to the Queen’s eldest son on social media, including Charles’ younger brother the Duke of York who shared an image of himself as a baby, being held by his big brother. Alongside the childhood snap he wrote: “Happy Birthday to The Prince of Wales!⁣⁣ ⁣⁣To mark HRH’s 71st Birthday, here’s photo from 1960 of the then Prince Charles holding a baby Prince Andrew.⁣⁣ ”

🎂 Wishing a very happy Birthday to The Prince of Wales! 📷 @chrisjacksongetty / PA

The Duke and Duchess of Cambridge also paid tribute to Prince Charles as Prince William and Catherine shared a series of images of Charles with Prince Louis, Prince William and Prince Harry. Writing on the official Kensington Royal Instagram page, they said: “Wishing a very happy Birthday to The Prince of Wales!”

While the official royal family account shared a recent photo of the prince in Scotland as well as a photograph of him with his mother and father as a baby, alongside the message: “Wishing The Prince of Wales a very happy birthday!”

Do you have a birthday message for Prince Charles? Do you like to see new photos of the royal family?