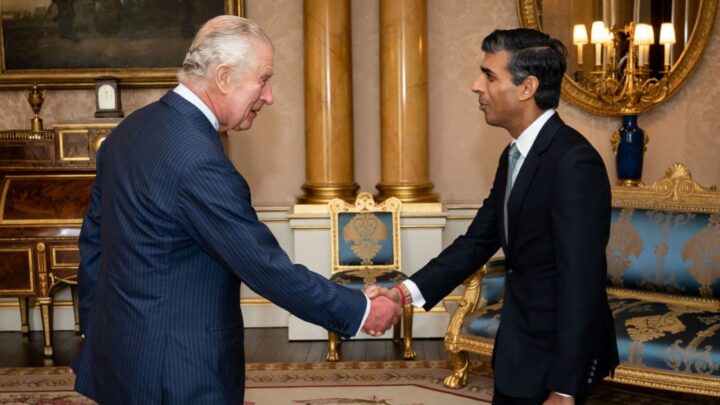 It’s been a nonstop few weeks for King Charles III. Just a little over a month after becoming King, Charles is already back in London to welcome his second Prime Minister.

The King formally appointed Rishi Sunak as the UK’s 57th PM on Monday, October 24. The meeting marked quite a historic day for His Majesty, as Sunak has become the first PM the King has asked to form a government in his name.

His Majesty asked him to form a new Administration. Mr. Sunak accepted His Majesty’s offer and was appointed Prime Minister and First Lord of the Treasury. pic.twitter.com/UnT3jMS8so

“The King received in Audience The Right Honourable Rishi Sunak MP today and requested him to form a new Administration. Mr Sunak accepted His Majesty’s offer and kissed hands upon his appointment as Prime Minister and First Lord of the Treasury,” Buckingham Palace said in a statement following the meeting.

Though as Sovereign, Charles has to remain politically neutral, the King is expected to work closely with the UK government. Per tradition, Charles will have a weekly audience with Sunak where the pair will discuss decisions and plans made by the government.

At 42, Sunak has now made his mark as the youngest PM and has secured a place in history by becoming the first person of colour and Hindu to hold the esteemed role. He is also the third PM the country has seen this year alone.

Sunak’s rise to power comes after the resignation of former PM Liz Truss who stepped down from her role on Thursday, October 20, making her the shortest-serving PM in the history of the UK.

Following a tumultuous time in office, kick-started by a poorly thought-out “mini-budget”, Truss quit her post just one day after telling members of parliament that she was “a fighter, not a quitter”.

Despite the PM backflipping on her ill-advised tax-cutting budget plan, Truss shouldered no responsibility as she blamed the state she’d inherited her job in during her resignation speech.

I will unite our country, not with words, but with action.

I will work day in and day out to deliver for you.

After being elected as party leader on Monday, Sunak made a speech outside 10 Downing Street addressing the country’s “profound economic crisis” and paid tribute to Truss, saying while she was “not wrong” at wanting to improve the UK growth “some mistakes were made,”  not “borne of ill will or bad intentions” but “mistakes nonetheless” and was going to fix them.

“I will place economic stability and confidence at the heart of the government’s agenda. This will mean difficult decisions to come,” he said.

“But you saw me during Covid doing everything I could to protect people and businesses with schemes like furlough.

“There are always limits, more so than ever, but I promise you this, I will bring that same compassion to the challenges we face today.”

Economic growth isn’t the only issue the country is currently facing either, as the UK has recently seen a spike in protest activities.

The most recent public stunt comes from Just Stop Oil protesters who took a swipe at the Royal Family after defacing Madame Tussauds’ waxwork of King Charlesin London.

Days prior Animal Rebellion took milk from supermarket shelves and poured it across the floor in order to promote a plant-based lifestyle.