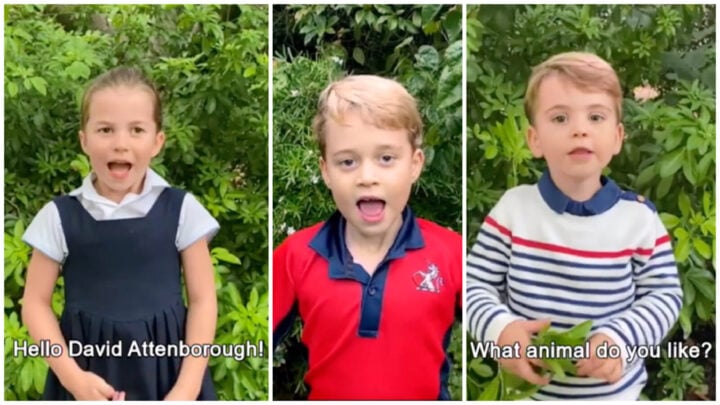 We’ve been treated to plenty of photographs of them in recent years by proud parents the Duke and Duchess of Cambridge, but now footage of Prince George, Princess Charlotte and Prince Louis speaking has been shared with the public for the very first time.

The cute clip was shared on the Kensington Royal Instagram page overnight and shows the young Cambridge children asking questions to world-famous naturalist Sir David Attenborough. “Ask David Attenborough,” the caption read. “We’ve got some questions for you.”

The adorable video, which has sent royal fans into a frenzy, begins with seven-year-old Prince George asking Sir David: “What animal do you think will become extinct next?” Attenborough then tells the young prince he hopes no other species will ever have to become extinct.

“About 40 years ago I was with some mountain gorillas in the centre of Africa. Mountain gorillas were then very, very rare, there was only 250 of them left. And we showed pictures of them on television around the world and people thought how terrible it would be if these became extinct.

“So they subscribed lots of money and lots of people came to help and now there are over 1,000 of them. So you can save an animal if you want to … So let’s hope there won’t be any more that go extinct.”

Fans couldn’t get enough of the video, with many commenting to say how nice it was to hear the royal children speaking. One wrote: “It’s so nice to hear their voices! Cuteness overload!!”

Another commented: “They are so cute, he answers them very simply and clearly for their age.” While another wrote: “William and Kate are so smart! They allow the public to see the children and the public just melts. So they control the narrative and the opportunities for presenting the children. What a video!”

The sweet video comes one week after Prince William and Catherine shared three new photos of their family spending time with the 94-year-old at their home. One of which included Prince William, Catherine and their three children Charlotte, George and Louis. William could be seen chatting the Attenborough as the kids watched on. The duchess was dressed in a gorgeous blue dress and the children were smartly dressed in button-up shirts – and an adorable dress for charlotte.

Meanwhile, in another photo William sat with his two sons with a huge smile spread across his face and in the third the prince sat alongside Attenborough as they watched an outdoor screening of Sir David’s upcoming feature film David Attenborough: A Life On Our Planet.

“The Duke and Duchess of Cambridge are delighted to share new photographs of their family with @DavidAttenborough,” the post on Instagram read. “The photographs were taken earlier this week in the gardens of Kensington Palace, after The duke and Sir David attended an outdoor screening of Sir David’s upcoming feature film  David Attenborough: A Life On Our Planet.

“With a shared passion for protecting the natural world, they continue to support one another in their missions to tackle some of the biggest environmental challenges our planet faces. This includes working together on the @EarthshotPrize, the most prestigious global environment prize in history – further details of which will be shared in the coming weeks.”