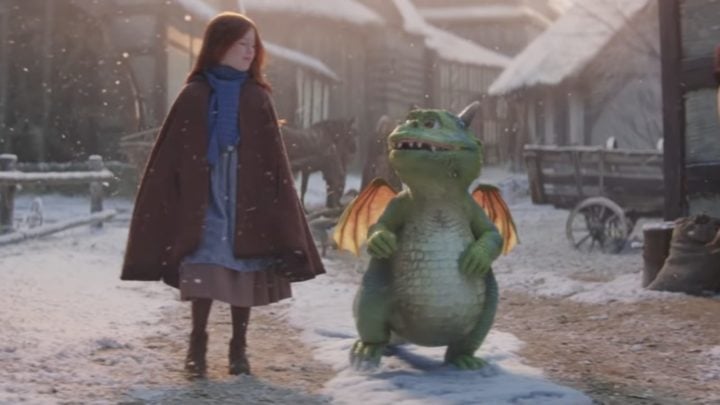 The heartwarming ad is based around a little girl and her friendship with an excitable dragon called Edgar. Source: John Lewis & Partners/YouTube

The heartwarming ad is based around a little girl and her friendship with an excitable dragon called Edgar, who almost ruins Christmas with his uncontrollable fire-breathing outbursts.

Distraught, Edgar locks himself away in his home, but Ava encourages him to rejoin the village festivities with the gift of a Christmas pudding, which he carefully sets alight and wins back the trust of the community.

The touching video has received much praise from viewers who had been waiting all year to see what the department store, which has become renowned for its Christmas adverts, had in store for 2019.

“I look forward to seeing the ad every year… you’ve nailed it again it’s fabulous,” @merilies2 wrote on Twitter.

“What an important and beautiful Christmas message,” @lisa1davies added. “Everyone is important, everyone has something special they can do it’s just about having someone believe and support them along the way to find what that is. Well done John Lewis.”

While @JackieDobson10 wrote: “Absolutely love this. What a powerful message about believing in someone.”

“It started from a spark of an idea – a little dragon’s excitement about Christmas – and became the story of how someone goes the extra mile for their best friend to give just the right gift.”

Last year’s ad showed the life of singing legend Elton John. The advert begins in the present day with Elton sitting on a chair playing a piano by his Christmas tree. It then works backwards chronologically through the singer’s life, from his performances on stage in front of thousands to his first time in a recording studio and right back to his childhood when he first performed in front of a crowd.

However, the truly emotional part is when a young Elton is seen opening a special present on Christmas morning – his grandmother’s piano. While to some this may have been just a present, it was this gift that led the now 71-year-old down the path to become a musician.

What do you think of the advertisement?