‘Alive and well’: The moment Cleo Smith is found by WA Police 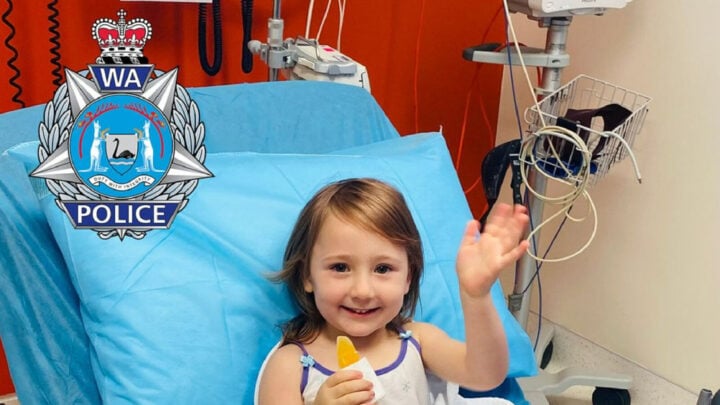 UPDATE:
Body camera footage from the moment four-year-old Cleo Smith was rescued from the house where she was found, has been released by Western Australia Police. The footage is both heartwarming, and heartbreaking, and can be viewed below:

The moment Cleo was rescued ???? pic.twitter.com/arusYi9kCa

The first pictures of missing four-year-old Cleo Smith have been posted, after her safe recovery in the early hours of this morning.

Cleo’s safe return to her family came following a raid on a suburban home in Carnarvon, Western Australia, and several tipoffs from the public. Cleo, who had been missing for 18 days, was found “alive and well” by Detective Senior Sergeant Cameron Blaine at 1am local time.

Cleo was taken to hospital for a health and welfare check, and has since been released “uninjured”. A picture of Cleo in hospital was released to the WA Police social media accounts.

The miracle we all hoped for. ❤️ pic.twitter.com/zOd5WDTA1A

Following the posting of this picture, a tweet was released announcing a press conference would be held at 1pm local time. At the press conference, a number of speculations were quashed.

A 36-year-old man is in custody. The man was “known” to the police. Detective Superintendent Ron Wilde said, “He is known but I have to be very careful around that.”

The man has not yet been charged, however, it is expected that this will change in the coming hours. Interestingly, WA Police note that this man only became a suspect in the case yesterday.

Cleo’s rescuer saw her a few times this morning. He shared these comments about her demeanour following her rescue:

“She is a little Energiser bunny.”

“How she has that much energy… I wish I did, I am about ready to go to sleep.”

It was also confirmed during the press conference that the $1million reward would not be handed out, as the tip-offs which led to Cleo’s discovery were small cumulative ones, rather than one large tip-off.

The press conference ended with a long round of applause, a rare sight for Police briefings.

Earlier today, Cleo’s mum Ellie Smith took to Instagram to share a news alert on her daughter’s discovery alongside the caption, “Our family is whole again.”

Well wishes and sentiments of relief that Cleo had been returned safely to her family have been shared around the country. Prime Minister Scott Morrison shared a tweet early this morning, as too did WA Premier Mark McGowan.

Cleo Smith has been found and is home safe and sound.

Thank you to the many police officers involved in finding Cleo and supporting her family.

More to come as the story unfolds.