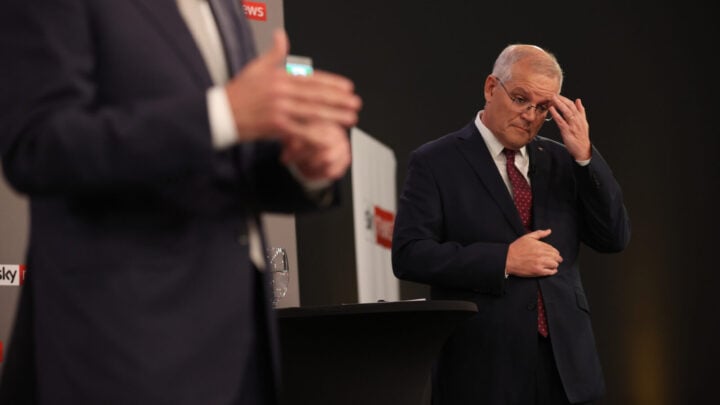 Alcott took to Twitter to voice his response to Morrison, taking an apparent sarcastic jab at the PM's ill-conceived remark. Source: Getty

Australian Of The Year Dylan Alcott has responded to Prime Minister Scott Morrison’s recent remarks where he claimed he was “blessed” to have children without a disability.

During the debate on Wednesday, April 20, Morrison was questioned about what the future of the National Disability Insurance Scheme in Australia would look like under the Liberal National Party.

In response to the question, Morrison revealed he and his wife had been fortunate that their children were born without disabilities.

“Jenny and I have been blessed, we’ve got two children that don’t — that haven’t had to go through that,” Morrison said.

“And, so, for parents with children who are disabled, I can only try and understand your aspirations for those children.
“And then I think that is the beauty of the National Disability Insurance Scheme.”

The comments were quickly met with intense backlash from the public, with many slamming the PM for the “ignorant” and “out of touch” remarks.

Alcott joined in on the chorus of condemnation, taking to Twitter in what appeared to be a sarcastic jab at the PM’s ill-conceived remark.

“Woke up this morning feeling very blessed to be disabled – I reckon my parents are pretty happy about it too,” Alcott wrote.

The tennis star went on to note that sympathy isn’t helpful for the disabled and that the right to one’s liberty is what the minority really needed.

Woke up this morning feeling very blessed to be disabled – I reckon my parents are pretty happy about it too.

Feeling sorry for us and our families doesn’t help. Treating us equally, and giving us the choice and control over our own lives does

The tweet received an overwhelming response from followers as many fans rallied behind Alcott.

“We are blessed to have you as Australian of the year, and for everything you’ve achieved. Thank you Dylan. #ScottyTheWorstPrimeMinisterEver,” one fan wrote to Alcott.

“There is not a single moment nor a thing, not a hair, I would change about my 6 year old Neurodivergent child. We don’t need to be blessed, we need to be included, and as a Mum I’m the lucky and fortunate one he chose us to open our eyes to a better world,” another commented.

Others were quick to point out inconsistencies in Alcott’s response as they defended the PM’s comments.

“Dylan I love ya mate, but if people with disabilities could just be “treated equally” then the NDIS wouldn’t be expecting to spend $60bn a year to get people to a point where they CAN participate and have that control over their own lives,” wrote one user.

“I missed where ScoMo said disabled children weren’t a blessing. People criticise pollies for what they say, then what they don’t say. Nothing about his comment was offensive. It is a blessing to have healthy children. Every parent who has children on NDIS would prefer they weren’t,” commented another.

Following the intense criticism, Morrison defended his comments while explaining to 2GB’s Ray Hadley that the remarks were made in “good faith”.
“I was just simply saying that it’s tough and I’m grateful that there are these hardships that I and Jenny haven’t had to deal with, there are other things but it’s tough and it’s hard,” Morrison said.
“There is no greater love than a parent has for a child and particularly a child that has special needs and it is a blessing but I was simply trying to say in good faith that I haven’t walked in your shoes Catherine I’m not going to pretend to say that I understand it as well as you do.”
NewsMediaPolitics
Share: