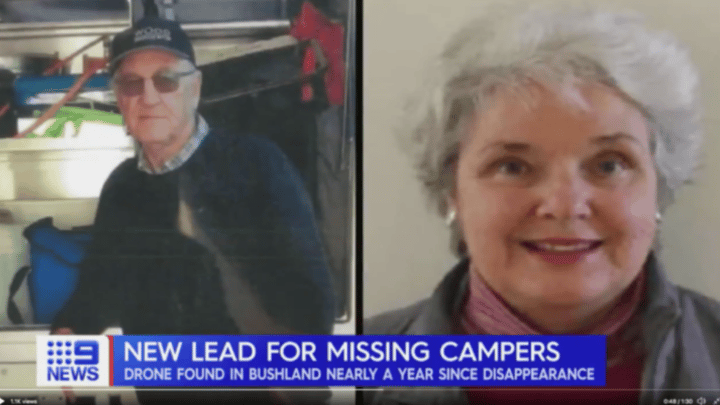 Russell, 74, and Carol, 73, vanished on March 20 last year while on a camping trip in remote the East Gippsland campgrounds of Wonnangatta Valley. Source: 9News

The wife of missing camper Russell Hill has spoken out for the first time since her husband’s disappearance with Carol Clay, saying she wants them found so “he can face the music”.

Russell, 74, and Carol, 73, vanished on March 20 last year while on a camping trip in the remote East Gippsland campgrounds of Wonnangatta Valley. The mystery of what happened to the pair continues to baffle detectives.

It’s now been nearly 14 months since the two vanished in the Victorian wilderness, and Russell’s wife-of-50-years Robyn Hill has now told News Corp Australia’s newswire service NCA Newswire that she believes she will never see her husband again.

Previous reports suggested Russell and Carol were high-school sweethearts, and that Robyn was unaware Carol would be joining him on the camping trip. While Robyn didn’t address how they had met, she confirmed that she and her husband had known Carol for more than 50 years and had even attended her first wedding.

“I can’t see how they will come home,” Robyn said. “He hasn’t spent any money, he hasn’t done anything. I just want them found, one way or the other, and then he can face the music if he’s still alive. See, I’m a bit of a sadist. You’ve got to be, otherwise you’d be in a heap.”

Robyn said she couldn’t understand what had happened, but was coping well and had support from friends and family. “Unless someone’s got them,” she said. “But why would they do that? I just want them found and then maybe work out what happened.”

It’s believed the pair left the Melbourne region on March 19 in a white Toyota LandCruiser, travelling to Licola before heading into Wonnangatta Valley on March 20. They were last heard from the same day via HF radio. The following day, other campers discovered their vehicle and campsite, which was completely destroyed by fire, near Dry River Creek Track.

A fortnight ago, the search site was moved 80km north-west to the Mount Hotham area, where it was abruptly concluded and redirected back to Wonnangatta when detectives found two shovels in thick bushland near the Great Alpine Road on April 14.

“At this stage, I’m aware of the discovery, but as to the relevance, that’s still being assessed,” Tony said. “They’ve been collected and we will assess them forensically. There are parts of that bush that have probably never been walked on by humans – it is that remote. We aren’t dealing with looking in a paddock … some of that bush is so thick.”

Tony said he hoped to have more information for the families soon, however, no further details have been released regarding the shovels thus far. Police are asking anyone with more information to phone Crime Stoppers on 1800 333 000.

What do you think happened to the pair?