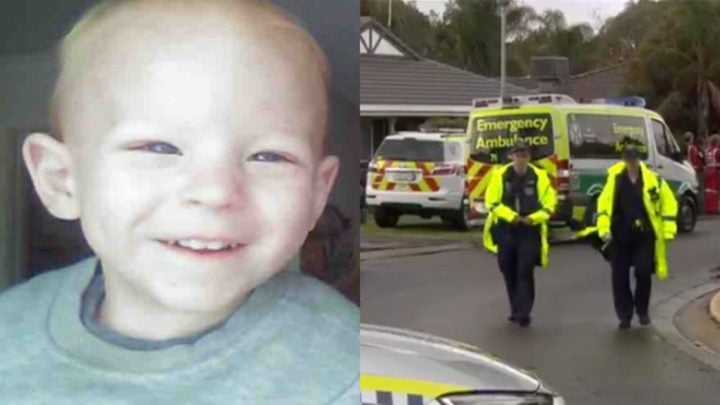 Two-year-old Tj tragically died after being run over by the family car in the backyard in Adelaide. Source: GoFundMe and Twitter/ 7 News Adelaide

The sister of a two-year-old boy who tragically died in a freak accident at the family’s home in Adelaide at the weekend has shared a heartbreaking message with the community as they rally together funds to pay for the toddler’s funeral.

Little Tj was run over by the family car in the backyard of their home in South Australia’s capital on Saturday. The young boy, reported to be the youngest of six siblings, was pronounced dead at the scene after being struck by a four-wheel drive car, despite efforts by paramedics to resuscitate the toddler.

Now in a bid to help the family in their time of need, sister Chloe Howell has reached out to the community for support to help farewell the “loveable” youngster.

The sibling of Tj created a GoFundMe page following the tragic accident in hopes of raising $4,500 to fund the funeral.

“My baby brother was in a freak accident on the 19th of June and died at the scene,” Chloe wrote. “I would like to help my mother and her partner pay for the funeral as we want to give him the send off he deserves.”

She added: “So please help lay baby Tj to rest. Even a dollar would help. Thank you.”

The generous community were quick to respond with the total reaching over $3,500 within a matter of hours. Some even left beautiful messages of support for the family as they grieve the loss of the little boy.

“RIP little man… my heart broke hearing the news the other night,” one person commented on the GoFundMe. “I don’t know your family but my thoughts are with you all.”

“There are no words that will ease your loss, I’m so so sorry,” another wrote.

While a third said: “RIP little Angel. Heartfelt condolences to the family”

South Australia Police confirmed the tragic news in a statement on Saturday, confirming they were called to a property in Angle Vale just after 11.30am on Saturday. An investigation has been launched into the incident.

Read more: ‘Lovable’ two-year-old boy dead after being run over by family car in backyard

Have you been following this story? Do you have a message of support for the family as they grieve the loss of the little boy?