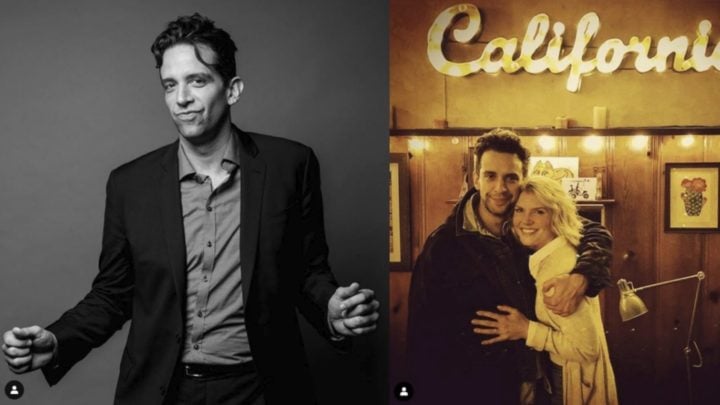 Broadway star Nick Cordero passed away at the age of 41. Source: Instagram/ amandakloots

Broadway star Nick Cordero has died after a challenging 95-day battle with coronavirus, which left him with severely damaged lungs and an amputated leg.

The 41-year-old, who is best known for his performances in musicals such as ‘Rock of Ages’ and ‘Waitress’, passed away this week and his wife Amanda Kloots shared a heartfelt tribute to her “darling husband” online. Taking to Instagram, the theatre performer spoke of Nick’s successful career, his loving role as a father to their one-year-old son Elvis and how much he will be missed by friends and family.

Amanda said she was in disbelief that he had gone, as she simply can’t imagine their lives without him. Describing Nick as a “bright light”, she said he was everyone’s friend and loved being a father and husband. Meanwhile, she also reached out to her husband’s “extraordinary doctor” and thanked him for fighting so hard to keep Nick alive over the past few months.

“God has another angel in heaven now,” she wrote on the post. “My darling husband passed away this morning. He was surrounded in love by his family, singing and praying as he gently left this earth … To Nick’s extraordinary doctor, Dr David Ng, you were my positive doctor! There are not many doctors like you. Kind, smart, compassionate, assertive and always eager to listen to my crazy ideas or call yet another doctor for me for a second opinion. You’re a diamond in the rough.”

She continued: “I cannot begin to thank everyone enough for the outpour of love, support and help we’ve received these last 95 days. You have no idea how much you lifted by spirits at 3pm everyday as the world sang Nick’s song ‘Live Your Life’. We sang it to him today, holding his hands. As I sand the last line to him, ‘they’ll give you hell but don’t you light them kill your light not without a fight. Live your life,’ I smiled because he definitely put up a fight. I will love you forever and always my sweet man.”

The heartfelt message was met with many comments from friends and followers, who all spoke so fondly of Nick and wished Amanda all the best going forward, in what will be a challenging time.

“I have no words. You both put up such a fight over the last 95 days, how you’ve remained so incredibly positive this entire time is beyond inspiring and truly proof of what an amazing human you are,” @sweatwithbec commented. “Sending you and Elvis all the love and thinking of you ALWAYS.”

Over the past few months Amanda has kept everyone up-to-date with her husband’s condition on Instagram. Nick’s health first began to decline in March and he was admitted to hospital and soon diagnosed with pneumonia. He received two negative tests for Covid-19, however doctors remained convinced he had contracted the virus, and on a third test he received a positive.

From their Nick faced a challenging battle against the virus and despite being a fit and healthy man, he suffered major complications. The Broadway star developed infections and underwent emergency surgery, however his condition didn’t improve and doctors were forced to amputate his leg. Over the following weeks he battled further issues with his lungs and suffered two mini strokes. And sadly, after three months in hospital, Nick succumbed to the virus.

Do you have a message for his family during this difficult time?