Do you live there? Australia’s friendliest city revealed 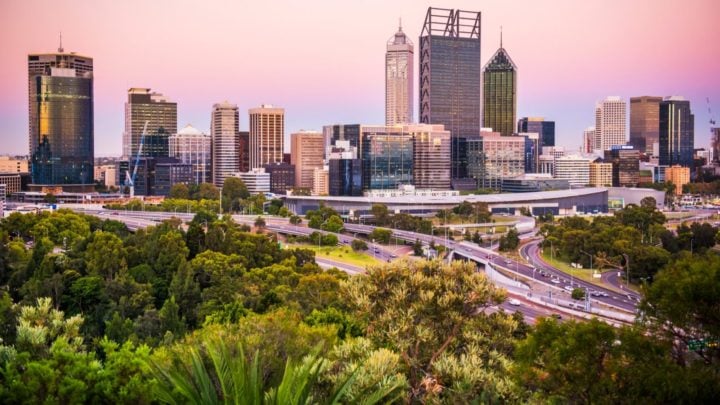 The WA capital city of Perth has been named Australia's friendliest town or city, according to a new survey. Source: Getty.

Everyone tends to think the city or town they live in is the best, but for locals living in the Western Australian capital of Perth, it seems they might be right. A new survey has named Perth as the friendliest Australian town or city, thanks to its residents and emerging social scene.

The accolade was bestowed upon Perth by Big 7 Travel who asked their 1.5 million users to answer the question: “Where you would find the friendliest cities and towns in Australia?”

Taking the top spot, Perth was described by the travel site as boasting “lively locals and an engaging social scene”. Proving why it came out on top, Perth was also described as being a “wonderfully vibrant and social place to be”.

Second place went to Coffs Harbour in New South Wales, thanks to the laid-back of attitudes of locals towards travellers, with the site claiming: “Whether you’ve been born and raised here or are just passing through, locals will treat you with the same kind attitude.”

Third place went to the Queensland capital of Brisbane thanks to it warm and welcoming community, while Adelaide, SA, came in fourth with its CBD and suburbs being described as “friendly to just about everyone”.

“The city has excellent walkability, so you can just wander around at your own leisure,” the website says of Adelaide. “Expect to bond with welcoming locals over a drink or two.”

Queensland claimed another spot in the top five, as Cairns was favoured due to the “open-mindedness” of locals, while bustling Melbourne came in sixth. The website said: “Melbourne’s progressive atmosphere makes it an enjoyable city to visit, with some of the friendliest people in Australia to boot. It’s family-friendly and safe, with heaps of culture and makes visitors soon feel like locals. You’ll get an instant feel for the friendliness here.”

Port Macquarie took seventh spot in the list – which totalled 25 of the nation’s most affable places – due to its “warm people and hospitality”. “This scenic coastal NSW town has plenty to offer. You’ll ask for directions and end up being personally shown there,” the website reads.

Darwin came eighth, with its multicultural mix of residents earning it kudos with visitors, along with the fact that the city is easy to navigate.

Australia’s capital Canberra bagged ninth place, despite being described as “quiet-ish”, while the Tassie capital of Hobart rounded off the top ten.

“Family-friendly and safe, with heaps of culture and makes visitors soon feel like locals,” the site says. “The atmosphere in the city and beyond is hard to match, with a homey feel and locals who go the extra mile to welcome tourists.”

Do you live in Perth? Do you agree with the results of this survey?