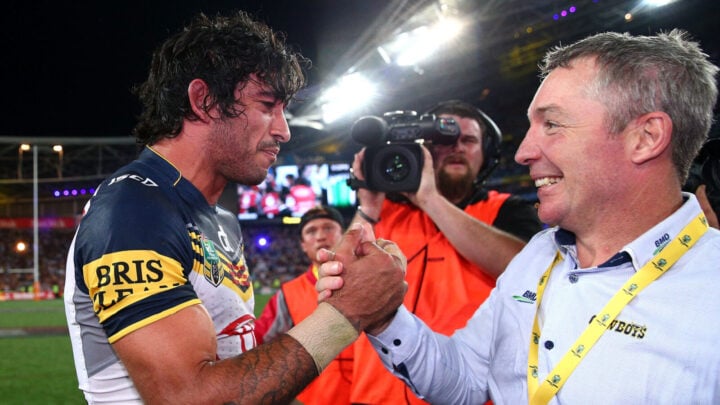 Despite the tragic loss and the difficulty that Thurston has experienced he found some solace in the good memories that he shared with Green. Source: Getty Images.

An emotional Johnathan Thurston has opened up about the “tough few days” he has experienced following the sudden death of rugby league star and premiership-winning coach Paul Green.

Thurston, who played in Green’s 2015 premiership win for the North Queensland Cowboys, revealed to 100% Footy that Green’s sudden passing “is still pretty raw” and that he is still trying to comprehend the loss.

“It has been a tough few days for everyone,” Thurston said.

“A range of emotions going through me each and every day playing with the kids and thinking of the good times I had with Greeny.

“It is sad, I don’t know how it came to this. I have been lucky to have a good support crew around me to help with this.

“It is difficult. It has been difficult on a lot of people, obviously. Still trying to get my head around it.”

Despite the tragic loss and the difficulty that Thurston has experienced he found some solace in the good memories that he shared with Green over the years, particularly Green’s go-to karaoke song.

“He’d get a few under his belt and start singing Ice Ice Baby,” he said.

“He loved to bring people together, loved to be the life of the party whether it be for a barbecue, a glass of red or down the park with the kids, he loved being around people.

“He was a very considerate person, always wanted to know what you were doing and how you were feeling.

“He had a massive heart on him. He was a high achiever in his life. Still quite difficult to understand how this has all unfolded.”

Thurston joins a devastated rugby league community in mourning the sudden death of Green whose stellar playing career included taking the field an incredible 162 times with a number of clubs which included the Cronulla-Sutherland Sharks, North Queensland Cowboys, Sydney Roosters, Parramatta Eels, and the Brisbane Broncos.

It was recently revealed that the sporting icon will be farewelled in a public funeral to celebrate his life and incredible sporting achievements.

The public funeral is expected to be held towards the end of August, either on the 23rd or the 30th. The event will reportedly be held at Kougari Oval, the home ground of the Wynnum-Manly Seagulls where Green played as a junior and where he would later return as a coach to lead the Seagulls to Queensland Cup premierships in 2011 and 2012.

“It will be a celebration of the awesome life Paul lived and the wonderful things he did for people,” Green’s brother Rick told The Sunday Mail.