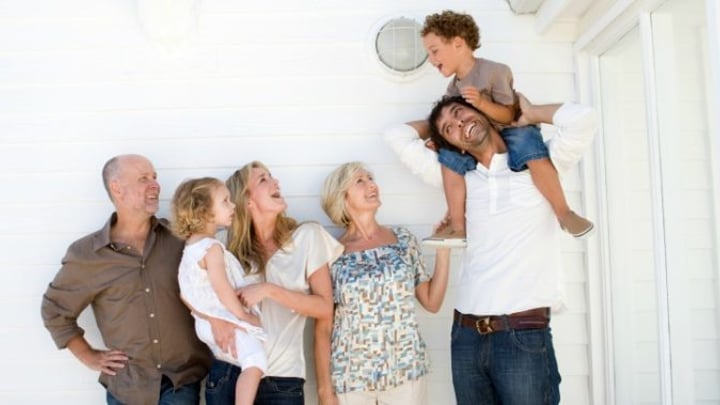 Helping your children buy their own family home can be rewarding, but you must ensure you understand the risks too. (Picture posed by models.)

They scrimped to get their first home deposit, then battled to pay off mortgages with interest rates of 17 per cent or more, but the hard times have paid off for many Baby Boomers.

Research shows that that 65-pluses are, broadly speaking, in a happy place money-wise; 95 per cent are home owners (of whom 61 per cent own their properties outright), 40 per cent have already received an inheritance (which more than half used to pay off debt or build their savings), and just 26 per cent expect to have to use the equity in their home to fund their retirement.

Luckily for the younger generations, many Baby Boomers are also generous with their good fortune. Almost 20 per cent have already helped their adult children buy a home, and more than three quarters said they’d be willing to do the same, either through a loan or a gift, if necessary.

The options available to such generous parents, however, are wider than they used to be, with mortgage guarantor products growing in popularity. Being a mortgage guarantor – unlike the more traditional helping-hand routes of being a joint borrower or simply giving an informal loan or gift of money – involves using a property-owner’s home equity as security for another person’s mortgage.

An increasing number of banks have begun offering mortgage guarantor products over the past five years, a quarter of 65-pluses say they’d consider being a guarantor on their children’s mortgages to help them get on to the property ladder.

But as with all financial products, there are pros and pitfalls to consider.

With guarantor products, the property owner (you) uses the equity they’ve built up in their property as a security against a portion of a mortgage (for your children), while the mortgagee (your children) remain responsible for the loan repayments. Having a guarantor means a would-be buyer who can’t save enough money for a minimum deposit can get on to the property ladder more quickly.

As Rob Lockhart, a financial educator at Westpac, explains of the guarantor’s role, “it’s basically you saying ‘if my child doesn’t pay that money back, I’ll make up the difference’”.

The pros of mortgage guarantor products

For the guarantor, one of the biggest advantages is that no money need change hands. That way, they avoid the potential cost of offloading their own assets or depleting their savings to assist their child.

A second advantage is that, unlike in the case of being a joint borrower where both parties are exposed to the entirely of the mortgage, the guarantor can limit their exposure to the mortgage by putting a cap on the portion of the loan they’re willing to guarantee.

Lenders will also usually put a limit on the proportion of the loan the guarantor can secure, based on the lender’s own assessments of the creditworthiness of the borrower and the value of the guarantor’s property. For example, under the terms of its Family Pledge product, St. George doesn’t allow a guarantor to provide more than 50 per cent of their own home equity as a guarantee, nor does Westpac’s Parental Guarantee product.

Once the mortgagee has repaid 20 per cent of the value of their home purchase – as previously mentioned, the LVR required by most banks is 80 per cent – the guarantor is released from their obligations. It’s important, though, to make sure you’ve had a legal advisor check the terms of the mortgage guarantee and the extent of your liability before signing up to the agreement.

A third, substantial benefit of the product is that it saves the borrower from the cost of LMI – something that can considerably to the cost of a mortgage.

Borrowers who don’t have a 20 per cent deposit, have a poor credit history or don’t have the required documents to prove their income and job history are usually subject to LMI to protect the lender against default. The cost of LMI depends on the size of the deposit and the loan, with the premium either paid in full when the mortgage is taken out or as an additional sum on top of the mortgage repayments.

Having a guarantor willing to pledge a sum sufficient to take the borrower up to or over the minimum 20 per cent mark means the lender will usually waive the requirement for LMI, potentially saving the borrower thousands of dollars.

The pitfalls of a mortgage guarantor product

Using home equity as security means the homeowner’s own financial flexibility is reduced, in that they can’t sell their home or borrow against it as easily while the guarantee is in place. This can curtail any spending plans that might not have been foreseen at the time of becoming a guarantor.

This is an increasingly important consideration as banks in Australia tighten their lending criteria, which means that having a security over a portion of home equity could result in the guarantor having to pay a higher rate of interest on any loan they personally wished to take out while the guarantee was in place.

Guarantors are also liable for the value of the portion of the loan they’ve guaranteed should the borrower default on repayments – which can in a worst-case scenario put their own home at risk.

Using the above example again, if the buyer of the $500,000 property defaulted on their loan repayments, not only would they potentially lose their deposit, but their parents could be liable for $75,000 worth of repayments. The lender could pursue the parents for this sum, and if they didn’t have sufficient cash to repay it, they could be forced to sell their own home to meet their obligation.

“If your child doesn’t make repayments on the loan or for whatever reason gets in to financial difficulty, the bank may end up having to sell that home, and if there’s a shortfall between the sale price and what’s owned to the bank, as the guarantor, the bank will come to you and say ‘can you pay out that shortfall up to the limit you put on your guarantee?’,” Lockhart says.

“If you don’t have the money you could have to sell your home to pay that out, which is why you’ve really got to think hard and fast about going guarantor … What you want to make sure, is that your child has a regular income that they can use to repay the mortgage, that’s an absolute must.”

Do you think the younger generations need help to crack the Australian property market? Did you receive any help to buy your own first home?

Things to know: The information in this publication is general information and factual only. It does not constitute any recommendation or financial product advice. It is an overview only and it should not be considered a comprehensive statement on any matter or relied upon as such. Read the product T&Cs available at westpac.com.au before deciding.  © Westpac Banking Corporation ABN 33 007 457 141 AFSL and Australian credit licence 233714

Use the equity in your home to help your children get into their first home with the Parental Guarantee.