‘Mum’s will is going to cause a family feud, so how do I head it off?’ 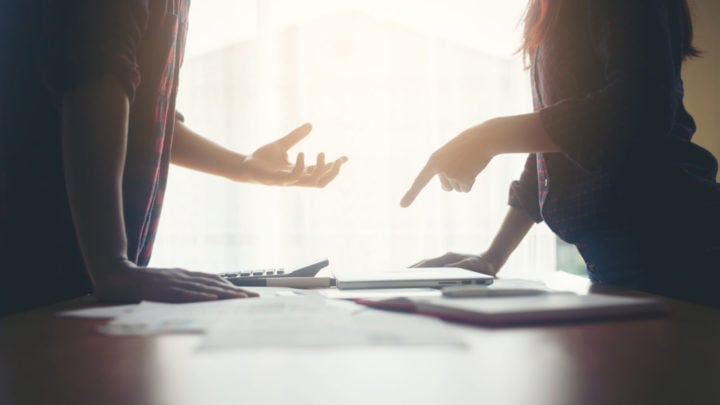 Money is often the root of many family feuds. Source: Getty.

My elderly mother remarried several years ago to her partner who she’d been living with for several years. He was a self-funded retiree at the time. Before this they both had their own houses. He used the proceeds of the sale to buy a new house worth $400,000 at the time for them both.

My mother sold her house and put the money (also $400,000) in term deposits earning absolutely minimal interest. Both contributed to the upkeep of the new house. My mother’s partner always said that when he died he would leave the house to his two children with the proviso that my mother be allowed to live in the house until she dies.

My mother provided in her will that both my brother and I are bequeathed 50 per cent each of her money. All good so far.

Unfortunately, her partner passed away early last year, but before he died, he changed his will to leave the house solely to my mother. I think this was because both his sons had bled him dry over the years, leaving him with no money left as a self-funded retiree to the point that he was on the Age Pension when he died.

I am concerned, however, that her partner’s two children will contest the will now that they are only getting 25 per cent each on the sale of the house and none of the money, given that there was always an understanding they would both get the house split between them equally.

Would it be an idea that my mother gives my brother and I the money now while she is still alive so that the others can’t get it and both my brother and I hold the money in trust for her just in case she needs it? There is no question of us taking the money for our own benefit.

My mother is frail and may need to go into an aged care home (not self-contained) where she is looked after within the next couple of years. Would this be an issue as she would need to use the collateral of the house to buy into the aged care home? If that occurs, when she dies there would presumably not be much left out of the house collateral to share four ways.

What advice can I give my mother as we are very wary of the others on the other side?

Whether they would be successful if they did, is always the question. Clearly, your stepfather seemed to have a good reason to change his will in light of the conduct of his sons. But that is just one factor that the law considers in determining whether the sons would be successful.

Your mother seems to have had a change of heart however, and despite your stepfather’s views on his sons, she seems to have relented in changing her will to give them something when she has no apparent obligation to do so. However, the horse has bolted as they say and there is little you can do to change the current outcome given that the outcome is determined by what your mother chooses to put in her will.

Trying to die poor or giving away money in later life is always a dangerous tactic in an attempt to avert disputes over your estate. In New South Wales, for example, the law says you can go back five years before a person died and reverse any gifts they made in that time if the intention was to avoid any subsequent claims on their estate.

Even worse, it can have a disastrous effect while you are still alive in terms of entitlement to the Age Pension and the effect on aged care fees. Best advice is never to do it without good advice.

Generally speaking, the financial demands of aged care can sometimes wreak havoc on our will. It can sometimes be necessary to sell a home to finance our aged care. In your mother’s case, this is a possibility given she owns the home.

But if it was sold for that purpose, given the terms of her current will, that could result in the gift of the sale proceeds of the home in her will redundant because home would not exist when she died. That could mean the stepchildren get nothing. However, whether they actually do, or don’t, depends very much on the wording of your mother’s will.

For example, if the will said that they get a share of the proceeds of sale of the home even if it is sold before she dies, they will be entitled to that share when she does die. However, if the will assumes she still owns it when she dies and the reference to the sale proceeds is a reference to the sale of the home after she dies, then the stepchildren will miss out.

Of course, it is entirely up to your mother as to what she puts in her will, if she has the necessary capacity to understand what she is doing in her will. As children, you always need to be careful about influencing your parents in terms of what they put in their wills. However, from your perspective, and given the contorted facts, you would be concerned to ensure that she clearly understands the implications of what is in her current will.

There is nothing wrong with helping her to understand that. But the best person to do that is someone removed from the situation, such as a solicitor. Taking that step can be very helpful also in any subsequent contest about your mother’s will and whether she did, or didn’t, understand what she was doing.

Have you had a family fight over an inheritance? How did you overcome it?